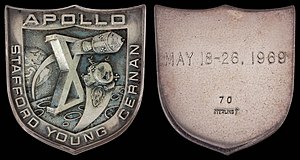 NASA space-flown Apollo medallions were mission-specific commemorative medallions which were approved by NASA and carried aboard the mission spacecraft into orbit. Apollo 10 (May 18 – 26, 1969) was the fourth crewed mission in the United States Apollo program, and the second (after Apollo 8) to orbit the Moon. While astronaut John Young remained in the Command Module orbiting the Moon, astronauts Thomas Stafford and Gene Cernan test flew the Apollo Lunar Module but did not land.

The medallions were struck by the Robbins Company in sterling silver and ordered by the mission crew as a personal memento of their flight. A total of over 3,000 Robbins medallions were flown into space across the 12 crewed flights of the Apollo program.Photograph credit: Heritage Auctions; commissioned by the NASA astronaut office

This image was chosen at random from a selection of eleven. (View another image)