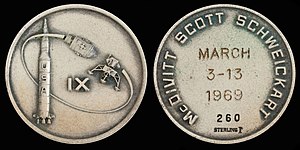 NASA space-flown Apollo medallions were mission-specific commemorative medallions which were approved by NASA and carried aboard the mission spacecraft into orbit. Apollo 9 (March 3 – 13, 1969) was the third human spaceflight in NASA's Apollo program. Flown in low Earth orbit, it was the second crewed Apollo mission that the United States launched via a Saturn V rocket. The three-man crew consisted of James McDivitt, David Scott, and Rusty Schweickart; during the mission they tested systems and procedures critical to landing on the Moon, including the lunar module engines, backpack life support systems, navigation systems and docking maneuvers.

The medallions were struck by the Robbins Company in sterling silver and ordered by the mission crew as a personal memento of their flight. A total of over 3,000 Robbins medallions were flown into space across the 12 crewed flights of the Apollo program.Photograph credit: Heritage Auctions; commissioned by the NASA astronaut office

This image was chosen at random from a selection of eleven. (View another image)