Aleksandar Berić (Serbian Cyrillic: Александар Берић; 13 June 1906 – 12 April 1941) was a Yugoslav naval officer who was killed during the Axis invasion of Yugoslavia in April 1941. As the captain of the Royal Yugoslav Navy river monitor Drava, he oversaw the downing of three Luftwaffe Junkers Ju 87 Stuka dive bombers on 12 April. Drava was eventually overwhelmed by the dive bombers, one of which scored a direct hit against her engine room. The ensuing explosion resulted in Drava's destruction, killing most of her crew. Berić either sank together with the ship or was killed by fifth columnists upon reaching the shore. 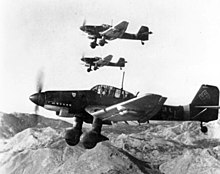 Aleksandar Berić was born in Novi Bečej, Austria-Hungary on 13 June 1906. His father Ivan was originally from Bečej and his mother Draga, who died at a young age, was originally from Subotica (both of which are located in modern-day Serbia). Berić attended the University of Zagreb for a time, but eventually dropped out with the goal of becoming a sailor.[1] He subsequently enrolled in the Military Naval Academy in Dubrovnik, from which he graduated in 1929.[2] Berić served in various capacities aboard the Royal Yugoslav Navy vessels Sokol, Uskok, Dalmacija, Torpiljar 1 and Četnik.[3] He later briefly served as the captain of the minelayer Malinska.[2] On 12 December 1940, Berić was appointed as the captain of the river monitor Drava.[4] Bruno Šegvić, whom Berić had known from his days as a student at the University of Zagreb, was appointed as his first officer.[2]

On 6 April 1941, the Axis powers of Germany, Italy and Hungary invaded Yugoslavia in response to the Yugoslav coup d'état of 27 March, which had resulted in the overthrow of the regency led by Prince Paul and King Peter II's accession to the throne. Around 3:00 a.m. on the morning of 12 April, Drava encountered the ruined railway bridge at Bogojevo, which prevented it from navigating further along the Danube, and anchored nearby. By 5:00 a.m., the obstruction had been cleared, and Drava continued sailing. While Drava had been anchored, seven crew members deserted their posts, commandeered the ship's motorboat and headed for Erdut. At 7:30 a.m., Drava came under attack from nine Luftwaffe Junkers Ju 87 Stuka dive bombers of Sturzkampfgeschwader 77 flying from Arad, Romania.[5] Drava's anti-aircraft gunners managed to shoot down three of the incoming aircraft.[6] However, the monitor's anti-aircraft gunners were unable to overcome a second and third wave of attacks. Five bombs struck Drava, largely destroying the ship and killing most of her crew.[6] A sixth bomb fell directly down her funnel and exploded in her engine room.[5]

Around 7:45 a.m., Drava sank off Čib (modern-day Čelarevo) with the loss of 54 of her 67 crew, including her first and second officers, according to the historian Velimir Terzić. Of those who survived, seven were non-commissioned officers and six were sailors.[6] By other accounts, only ten of the monitor's 76 crew survived.[3] According to Terzić, Berić survived the sinking and managed to make his way to shore, but was then likely killed by fifth columnists.[6] By other accounts, Berić chose to go down with the ship.[3][4] His remains were subsequently identified by the local inhabitants and buried at a cemetery in the village of Belegiš.[4] 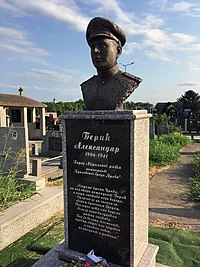 In 1942, Berić was posthumously awarded the Order of Karađorđe's Star with Swords, 4th Class. In 2002, he was posthumously awarded the Medal of Honour of the Federal Republic of Yugoslavia. A memorial bust of Berić was unveiled by Serbian Defence Minister Bratislav Gašić in the village of Belegiš, near Stara Pazova, on 6 April 2015. The headquarters of the Serbian River Flotilla in Novi Sad are also named after him.[4]