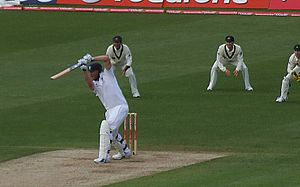 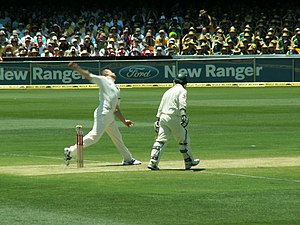 An all-rounder such as Andrew Flintoff is skilled at both batting (top) and bowling (bottom).

An all-rounder is a cricketer who regularly performs well at both batting and bowling. Although all bowlers must bat and quite a handful of batsmen do bowl occasionally, most players are skilled in only one of the two disciplines and are considered specialists. Some wicket-keepers have the skills of a specialist batter and have been referred to as all-rounders, but the term wicket-keeper-batter is more commonly applied to them,[1] even if they are substitute wicket keepers who also bowl.

There is no precise qualification for a player to be considered an all-rounder and use of the term tends to be subjective. The generally accepted criterion is that a "genuine all-rounder" is someone whose batting or bowling skills, considered alone, would be good enough to win him/her a place in the team.[2] Another definition of a "genuine all-rounder" is a player who can through both batting and bowling (though not necessarily both in the same match), consistently "win matches for the team" (i.e., propel their team to victory by an outstanding individual performance). By either definition, a genuine all-rounder is quite rare and extremely valuable to a team, effectively operating as two players.

Confusion sometimes arises when a specialist bowler performs well with the bat. For example, West Indies pace bowler Malcolm Marshall achieved ten scores of 50 or above in 107 Test innings between 1978 and 1991, but had a batting average of less than 19. He would be termed a "useful lower-order batsman", or indeed "a bowler who bats a bit". Equally, a specialist batsman/woman may be termed a "useful change bowler" and a good example of this is Australian Allan Border, who in a Test match against the West Indies in Sydney in January 1989 took 11 wickets for 96 runs (7/46 in the first innings and 4/50 in the second) as the conditions suited his occasionally used left-arm spin.[3]

One of the main constraints to becoming a recognised all-rounder is that batsmen/women and bowlers "peak" at different ages. Batsmen/women tend to reach their peak in their late twenties after their technique has matured through experience. Conversely, fast bowlers often peak in their early to mid twenties at the height of their physical prowess. Other bowlers, mostly spinners but also fast bowlers who can "swing" the ball, are most effective in their later careers.[citation needed]

In 2013, Ali Bacher used statistical analysis to argue that there had only been 42 genuine all-rounders in the history of Test cricket. He rated Garry Sobers as the best, followed by Jacques Kallis.[4]

Categorisation by use of statistics[edit]

One commonly used statistical rule of thumb is that a player's batting average (the higher the better) should be greater than their bowling average (the lower the better). In Test cricket, only two players i.e., Garfield Sobers and Jacques Kallis, have batting averages that are 20 greater than their bowling averages over their entire careers.[5] However, some other players have achieved such a differential over significant parts of their careers, such as Imran Khan.[citation needed] Wally Hammond and Doug Walters managed differences of 20.7 and 19.2, respectively, between their batting and bowling averages, however, they were generally regarded as occasional bowlers who could break partnerships rather than genuine all-rounders.

In overall first-class cricket, there are several players with significantly higher batting averages. Statistically, few can challenge Frank Woolley who had a batting average of 40.77 and a bowling average of 19.87. Woolley took over 2000 wickets in his career, scored more runs than anyone except Jack Hobbs and is the only non-wicketkeeper to have taken more than 1000 catches.[6]

Also, batting all-rounders may not bowl much due to injury concerns (e.g. Corey Anderson, Angelo Mathews), or their batting skills are far better than their bowling to begin with (e.g. Kane Williamson, Steve Smith) to the point they revert to being known as a batsman.[9]