Art and Feminism (stylized as Art+Feminism) is an annual worldwide edit-a-thon to add content to Wikipedia about female artists. The project, founded by Siân Evans, Jacqueline Mabey, Michael Mandiberg, and Laurel Ptak,[1] has been described as "a massive multinational effort to correct a persistent bias in Wikipedia, which is disproportionately written by and about men".[2] 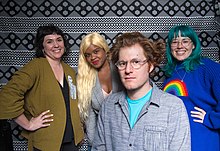 Art+Feminism started when Artstor librarian Siân Evans was designing a project for women and art for the Art Libraries Society of North America.[4] Evans talked with fellow curator Jacqueline Mabey, who had been impressed by Wikipedia contributors' organization of edit-a-thon events to commemorate Ada Lovelace.[4] Mabey spoke with Michael Mandiberg, a professor at the City University of New York who had been incorporating Wikipedia into classroom learning. Mandiberg in turn talked with Laurel Ptak, a fellow at the art and technology non-profit Eyebeam, who agreed to help plan the event.[4] The team then recruited local Wikipedians Dorothy Howard, then Wikipedian in residence at Metropolitan New York Library Council; and Richard Knipel, then representing the local chapter of Wikipedia contributors through Wikimedia New York City.[4]

One reason for establishing the Art+Feminism project included responding to negative media coverage about Wikipedia's cataloging system.[5][6] The project continues to fill content gaps in Wikipedia and increase the number of female contributors.[7][8] Only about 17 percent of biographies on Wikipedia are about women and only about 15 percent of Wikipedia editors are female.[9] Kira Wisniewski was appointed Art+Feminism's executive director in 2020.[10]

Play media
Video from an Art+Feminism edit-a-thon at the Museum of Modern Art, 2015

In 2020, due to concerns from the COVID-19 pandemic, the event was held virtually, via the Zoom video conferencing app.[24]

Content contributed by participants in the editing events is tracked in a coordinating forum on Wikipedia.[25]