From Wikipedia, the free encyclopedia
Jump to navigation Jump to search
Annual race in Germany since 1974

The Berlin Marathon (German: Berlin-Marathon, pronounced [bɛʁˈliːn ˈmaʁatɔn]) is a marathon event held annually on the streets of Berlin, Germany on the last weekend of September. Held annually since 1974,[a] the event includes multiple races over the marathon distance of 42.195 kilometers (26 miles 385 yards), including elite level road running competitions for men and women, a race for the general public, an inline skating race, a wheelchair race and a handcycle race.

Events are split over two days, with skaters competing on the marathon course on Saturday before the running events. Power walkers, hand-bikers, wheelchair riders, and a children's marathon (4.2195 km, 1/10th of the regular distance)[3] are also part of the marathon weekend, which is organised by SCC EVENTS. The elite running and wheelchair races are part of the World Marathon Majors, an annual series of top level races offering a $1 million prize purse. BMW is the current title sponsor for the race.

The city's flat course regularly produces fast performances and the marathon world record has been broken in Berlin on 11 occasions, particularly the most recent 7 instances on the men's progression. The current record was set at the 2018 edition, where Eliud Kipchoge won the men's race in 2:01:39. Gladys Cherono set a new women's course record that same year with 2:18:11.[4]

The Berlin Marathon was established in 1974 by Horst Milde, a baker and running enthusiast in the city. The race had 244 finishers; 234 men and 10 women, and was won by Günter Hallas and Jutta von Haase in times of 2:44:53 and 3:22:01 respectively. In 1977, Christa Vahlensieck established a new women's world record at the Berlin Marathon, running 2:34:47. Four years later, the race started outside the Reichstag for the first time, by which time it had grown to 2,583 finishers, making it the largest city road race in Germany. The following year, before German unification, some East Germans secretly ran the race, registering under false names to avoid recriminations from the East German secret service. In 1989, a children's race was added to the event, and eight years later an inline skating marathon was contested.[5][6]

In 1998, Ronaldo da Costa set a new men's world record, the only South American to hold a marathon world record. Two years later, one of the race's pacemakers, Simon Biwott won the race, after one of the favourites had pulled out in the second half of the race. In 2001, Naoko Takahashi became the first woman to run a sub-2:20 marathon, completing the Berlin Marathon in 2:19:46. The race had continued to be the venue of world records; between 2003 and 2018, seven men's records were set at the race; the most recent remains as the current world record time; Eliud Kipchoge's 2:01:39.[5][6]

The event was held in mid-September in 2000 and 2018, because of a conflict with the Women's Olympic Marathon, and due to German Unity Day preparations, respectively.[7]

The 2020 edition of the event was prohibited from being held on its originally scheduled dates due to the coronavirus pandemic,[8] and was eventually cancelled once it was clear that it would not be possible to hold it at a later date in 2020.[2] All registrants were given the option of either transferring their entry to 2021 or obtaining a refund.[2]

The marathon course is set throughout several boroughs in Berlin with start and finish near the Brandenburg Gate (bottom right).

The course within the metropolis starts and finishes near the Brandenburg Gate. Due to the division of the city, the marathon events before 1990 were limited to West Berlin only. On 30 September 1990 athletes were able to run through the Brandenburg Gate for the first time and since then, the course has covered both halves of the unified city. It was reported that a great many of the runners had tears in their eyes as they ran through the gate.[9]

Nowadays, after leaving Brandenburg Gate, the course passes Charlottenburg, around Tiergarten, along Moabit and Mitte, and then south to Friedrichshain. After that, it winds west between Kreuzberg and Neukölln, through Schöneberg, over to Friedenau and Zehlendorf, before turning north back toward the city's center. Looping above Schöneberg, the course comes full circle as it finishes through the Gate.[9]

There have been two other major international marathons in Berlin. At the 1936 Olympic Games and at the 2009 IAAF World Championships, both using different routes. A marathon in Berlin on 14 Oct 1973 was won by Ulrich Hutmacher (GER) with a time of 2:19:32, but that race is not considered to be part of the Berlin Marathon series.

In terms of finishing athletes Berlin is one of four world-wide marathons with more than 40,000 finishers, along with the New York City Marathon, Chicago Marathon, and Paris Marathon. 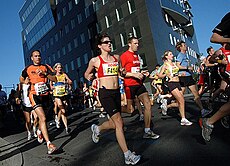 The Berlin Marathon is known as a flat and fast course. 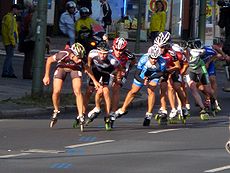 An inline skating section was added to the marathon event in 1997. A total of 5081 people took part in this section in the 2019 race. It is considered the largest inline skater marathon in the world and is the final venue of the World Inline Cup. The men's and women's race records are held by Bart Swings (56:49 in 2015) and Maira Yaqueline Arias (1:06:35 in 2017).

A wheelchair section was first officially held at the Berlin Marathon in 1981. Only men competed that year. The wheelchair race typically starts earlier in the day before the runners and power walkers.