Saget was also known for his adult-oriented stand-up comedy,[2] and his 2014 album That's What I'm Talkin' About was nominated for the Grammy Award for Best Comedy Album.

Saget was born in Philadelphia, Pennsylvania, on May 17, 1956,[3] to a Jewish family. His father, Benjamin (1917–2007),[4] was a supermarket executive, and his mother, Rosalyn "Dolly" (1925–2014),[5] was a hospital administrator. Early in his life, Saget's family moved to Norfolk, Virginia, where he briefly attended Lake Taylor High. Due to a lack of family in Virginia, Saget had his bar mitzvah in Philadelphia when he turned 13.[6] Saget's family moved from Virginia to the Encino neighborhood of Los Angeles, where he met Larry Fine of The Three Stooges and heard various stories from Fine.[7] The family would then move back to Philadelphia prior to his senior year[6][8][9] with Saget graduating from Abington Senior High School.[10][11][12] Saget originally intended to become a doctor, but his Honors English teacher, Elaine Zimmerman, saw his creative potential and urged him to seek a career in films.[2][13]

Saget attended Temple University's film school, where he created Through Adam's Eyes, a black-and-white film about a boy who received reconstructive facial surgery, and was honored with an award of merit in the Student Academy Awards. While attending Temple, Saget made trips via train to The Improv and to Catch a Rising Star in New York City where he would play "While My Guitar Gently Weeps" while using a water bottle to make the guitar appear to weep.[9][7] He graduated with a Bachelor of Arts in 1978.[14] Saget intended to take graduate courses at the University of Southern California but quit after only a few days. Saget described himself at that time in an article by Glenn Esterly in the 1990 Saturday Evening Post: "I was a cocky, overweight twenty-two-year-old. Then I had a gangrenous appendix taken out, almost died, and I got over being cocky or overweight."[15] Saget talked about his burst appendix on Anytime with Bob Kushell and said that it happened on the Fourth of July, at the UCLA Medical Center, and that they iced the area for seven hours before taking it out and finding that it had become gangrenous.[16]

Saget with Rolland Smith, Mariette Hartley, and Mark McEwen on The Morning Program in 1987

Following a short stint as a member of CBS' The Morning Program in early 1987, Saget was cast as Danny Tanner in Full House, which became a success with family viewers, and landed in the Nielsen ratings' Top 30 beginning with season three. In 1989, Saget began as the host of America's Funniest Home Videos, a role he held until 1997. During the early 1990s, Saget worked on both Full House and AFV simultaneously. In 2009, he returned to AFV for the 20th-anniversary one-hour special co-hosted with Tom Bergeron.[17]

Saget directed the 1996 ABC television movie For Hope, which was inspired by the life story of his sister, Gay Saget, who had died from scleroderma three years earlier.[2]

In 1998, he directed his first feature film, Dirty Work, starring Norm Macdonald and Artie Lange. Released one year after he left his long-running role as host of America's Funniest Home Videos, the film received broadly negative reviews from critics and earned low box office returns.[18][19] However, it has since become a cult favorite, due partially to Artie Lange's later popularity on The Howard Stern Show where the film is sometimes mentioned, often in unflattering terms.[20]

In 1998, Saget made a cameo appearance as a cocaine addict in the stoner comedy Half Baked.[6]

He served as the voice of the future Ted Mosby, who narrated the CBS sitcom How I Met Your Mother, which ran for nine seasons from September 19, 2005 to March 2014.[22]

From 2005 to 2010, Saget had a recurring role in four episodes of the HBO TV series Entourage playing a parody of himself.[25] He would later appear in the 2015 feature film based on the series. [26]

2005 also saw him be part of "Rollin' with Saget", a song by Jamie Kennedy and Stuart Stone, about a night out with him that shows off his raunchier behaviors. Saget even does vocals on the track. The video appeared on the MTV series Blowin' Up, and he would come to use it as a pseudo-theme song on his stand-up tours and website.[27] 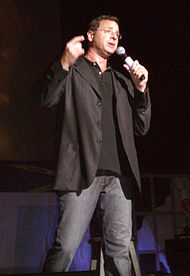 Saget appeared in the Broadway musical The Drowsy Chaperone for a limited four-month engagement. He played "Man in Chair" while Jonathan Crombie, who normally played the character on Broadway, was with the national tour of the musical. On January 4, 2008, Saget's caricature was unveiled at Sardi's Restaurant.[29]

In April 2009, he debuted in a new sitcom along with his co-star Cynthia Stevenson on ABC called Surviving Suburbia.[30] The series, which was originally slated to air on The CW, ended after one abbreviated season.[31]

In 2010, Saget starred in an A&E series Strange Days in which he followed others in different activities and lifestyles, documenting their adventures in unusual ways.[32]

In 2014, his book Dirty Daddy was released, in which he writes about his career, comedy influences, and experiences with life and death. He embarked on a small tour in support of the book, including the Pemberton Music Festival, where he introduced Snoop Dogg prior to performing his own set. In the same year, he toured Australia for the first time, with a stand-up show called Bob Saget Live: The Dirty Daddy Tour. The show was performed in the major cities of Melbourne, Sydney, Brisbane, and Perth.[33]

In 2015 and 2016, he guest-starred in two episodes of Grandfathered, starring and produced by his Full House co-star John Stamos.[34][35]

From 2016 to 2020, Saget reprised his role as Danny Tanner for fifteen episodes of Full House's sequel series, Fuller House, including its series premiere and finale.[36]

In 2019, he was announced as host of ABC's Videos After Dark.[38] Saget also hosted the game show Nashville Squares on CMT,[39] and made his first of three appearances[40] as a panelist on To Tell the Truth.[41]

In 2020, Saget launched a podcast titled Bob Saget's Here for You with Studio71.[42] He also competed in season four of The Masked Singer as "Squiggly Monster".[43]

Saget was a board member of the Scleroderma Research Foundation. His scleroderma efforts benefited such celebrities as Scary Movie star Regina Hall.[49] In an interview with Ability Magazine, Saget discussed how his sister was diagnosed with scleroderma at 43 and died at 47. She had previously been misdiagnosed numerous times.[50]

On January 9, 2022, Saget was staying at the Ritz-Carlton Orlando, Grande Lakes, south of Orlando, Florida, near Williamsburg. He was on a stand-up tour and had performed in Ponte Vedra Beach the previous evening.[51] Saget was found unresponsive in his room by hotel staff about 4 p.m. Eastern Standard Time (EST). He had missed his scheduled check-out time, and family members had grown concerned after being unable to contact him.[52] Emergency responders pronounced him dead at the scene; he was 65. No cause of death was immediately announced; foul play and drug use were ruled out by the sheriff and the medical examiner.[53][54] News of Saget's death broke during a broadcast of America's Funniest Home Videos in the Eastern and Central time zones, and ABC interrupted the program to announce it.[55] A tribute video was posted on the show's official YouTube channel, and a dedication for Saget was added before the credits of the following episode.

Saget has been honored with donations and offers to help the charity Scleroderma Research Foundation (SRF) whose board of directors Saget served on since 2003.[56] According to a statement made by the foundation's executive director on January 13, 2022, the foundation has received donations from more than 1,500 donors from all over the world, totaling over $90,000. Additionally, a donation of $1.5 million was awarded to the charity by one of its board members in the form of a grant, which will match every donation made in honor of Saget.[57]

His funeral took place on January 14, 2022, and he was buried at Mount Sinai Memorial Park Cemetery.[58]