In the sport of cricket, a bouncer (or bumper) is a type of short-pitched delivery, usually bowled by a fast bowler, which bounces once and then reaches the batsman at head-height.

A batsman attempting to play a hook shot against a bouncer.

A batsman may play a bouncer in either a defensive or an attacking way. If the batsman plays it defensively he aims primarily to avoid getting out, and secondarily to avoid being hit by the ball. For a head-high bouncer, these goals are achieved most easily by ducking under the ball. If the ball is at chest height, the batsman's best defence is to move on to his back foot, raise his bat vertically to chest height, and attempt to block the ball and direct it downwards to the pitch so as to avoid presenting a catch to a fielder. Sometimes the batsman will need to jump into the air to gain the necessary height to defend with the bat. He may also sway out of the way. Given these approaches, the bowler can hope to both intimidate the batsman somewhat, and possibly have the ball deflect off the bat at an awkward angle and produce a catch for a nearby fielder.

Conversely, the bouncer can be a very productive ball for the batsman, if he plays it in an attacking manner. The shot that is used to attack the bouncer is the hook shot. To play the hook shot the batsman moves his back foot backwards and towards the off side as the ball is being delivered. As the ball approaches, the batsman swivels from facing the off side to facing the leg side, while holding the bat horizontally. The batsman's aim is to hit the ball at high speed towards, into or over the leg side boundary. However, despite their run-scoring potential, hook shots frequently lead to wickets falling, particularly through balls hitting the top edge of the bat and being caught by leg side fielders. However, if the bouncer is misdirected by the bowler, and reaches the batsman on the off side of his wicket, the cut, uppercut or late cut can be played, either with the intention of guiding the ball along the ground, through a gap in the field setting or over the infield for four or six.[1]

There is an unspoken agreement, particularly in the time before the widespread use of batting helmets, that fast bowlers will not bowl bouncers at each other, because less skilled batsmen are less likely to effectively defend and therefore more likely to be struck.[2] Breaking of this rule can lead to "bouncer wars" – that is, the targeted bowler engaging in retaliatory hostile short-pitched bowling at his opponent during the following innings.[3]

The delivery is primarily used by fast bowlers, however, during a BBL match between the Hobart Hurricanes and Melbourne Renegades in 2020, Hurricanes leg-spinner Qais Ahmad bowled a 121 km/h bouncer to the Renegades' Shaun Marsh. It came as a surprise to keeper Ben McDermott, who, standing up to the stumps, could not react fast enough to catch the ball and thus conceded four byes.[4]

Because of the potential danger to batsmen of being hit and to stop bowlers bowling bouncers all the time, there are Laws in the Laws of Cricket governing how frequently a bowler may bowl bouncers, as well as how many fielders may field backward of square leg. These laws take into account the relative skill of the batsmen.

During the 1970s to 1980s, bouncers were used as part of a team's intimidatory tactics, especially by the West Indies team. In 1991, the International Cricket Council (ICC) introduced a "one bouncer per batsman per over" rule in an attempt to discourage the use of intimidation. However, the ruling was not well received by players and umpires alike, with English umpire Dickie Bird describing it as "farcical" as he felt that calling intimidatory tactics should be left to the umpire.[5] The ICC changed it to two bouncers per over in 1994, with a two-run no-ball penalty (rather than one-run no-ball) if the bowler exceeded two bouncers an over.[6] One Day International cricket allowed one bouncer per over in 2001 (and a one-run no-ball in case a bowler exceeded the limit).[7]

Fast leg theory, the deliberate and sustained bowling of bouncers aimed at the body, coupled with a cordon of legside catching fieldsmen to catch deflections, was a tactic used by England against Australia in 1932/33, dubbed the Bodyline series by the Australians. This controversial tactic caused the Laws of Cricket to be reformed to prevent any recurrence.

In 1954–55 in Sydney,[9] England fast bowler Frank Tyson bowled bouncers at Australian Ray Lindwall, who returned the favour by hospitalising Tyson with one of his own. An angry Tyson returned with a large lump on his head and took 6/85 in the second innings to give England a 38-run victory.

In 1994 at the Oval[10] Devon Malcolm was hit on the helmet by a bouncer from Fanie de Villiers. The incensed Malcolm told the South Africans "You guys are history" and took apart their second innings with 9/57.

Injuries and deaths caused by bouncers[edit] 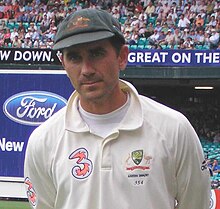 The bouncer is an aggressive delivery and the very nature of the delivery by a fast bowler and aimed at the head can lead to batsmen being hit in the chest, neck or head. While rare, impacts to the top part of the body can cause serious injuries or even death. While the laws of cricket can be used to limit the delivery, particularly when being used against specialist bowlers at the end of the batting order, it is not outright banned like the beamer.

In 1962, Indian captain Nari Contractor was hit above his right ear by a Charlie Griffith bouncer which resulted in severe loss of blood and left Contractor critically ill. He regained full consciousness after six days and returned to first-class cricket ten months later.[11]

In 2006, playing in his 100th test, Australian opener Justin Langer was struck on the head by a bouncer from Makhaya Ntini and hospitalised. In 2008 West Indies batsman Shivnarine Chanderpaul was knocked out for several minutes after being hit by a bouncer from Australian fast bowler Brett Lee during a test match.[12] Shoaib Akhtar injured both Gary Kirsten (2003) and Brian Lara (2004) with fast bouncers. Both batsmen had to be taken off the field.[13]

In November 2014, Australian cricketer Phillip Hughes was knocked unconscious by a bouncer from Sean Abbott, which hit the side of his head, between the grille and shell of his helmet, during a Sheffield Shield match.[14] He was taken to hospital in a critical condition, suffering from a subarachnoid haemorrhage, but died from his injuries two days later, never having regained consciousness.[15]

During the semi-final of the 2019 Cricket World Cup, against England, Alex Carey injured his chin from a bouncer bowled by Jofra Archer. The resulting blow knocked the helmet off Carey's head; he caught it mid-air, potentially saving himself from dismissal.

During the second test of the 2019 Ashes Series, Australian batsman Steve Smith was hit on the neck by a 92.4mph(148.7 Kmph) delivery from England fast bowler Jofra Archer. After retiring concussed, Smith returned to play 45 minutes later.[16] The Australian medical team's decision to let him play was criticised by the brain injury charity Headway, as "incredibly dangerous".[17] Smith's replacement, Marnus Labuschagne, became the first concussion substitute in a Test match.[18]