From Wikipedia, the free encyclopedia
Jump to navigation Jump to search
Outer perimeter of the playing field 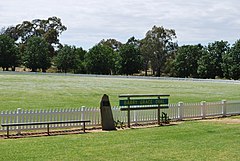 A cricket oval in Wallendbeen, New South Wales with a white picket fence, traditionally used as the boundary

In cricket, the boundary is the perimeter of a playing field. It is also the term given to a scoring shot where the ball is hit to, or beyond, that perimeter, which generally earns four or six runs for the batting team.

The boundary is the edge of the playing field, or the physical object (often a rope) marking the edge of the field. In low-level matches, a series of plastic cones are sometimes used. Since the early 2000s, the boundaries at professional matches are often a series of padded cushions carrying sponsors' logos strung along a rope. If one of these is accidentally moved during play (such as by a fielder sliding into the rope in an attempt to stop the ball) the boundary is considered to remain at the point where that object first stood. The boundary is at least 195 feet (59 m) from the center of the field in men's international cricket.[1] 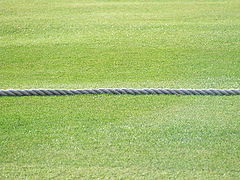 A law change in 2010 declared that a fielder could not jump from behind the boundary and, while airborne, parry the ball back on to the field.[2][3]

A boundary is the scoring of four or six runs from a single delivery, with the ball having left the field, and its first bounce having occurred either entirely within the playing field (in the case of four runs) or not (six runs); these events are known as a four or a six respectively.[4]

When this happens the runs are automatically added to the batsman's and his team's score and the ball becomes dead. If the ball did not touch the bat or a hand holding the bat, four runs are scored as the relevant type of extra instead; six runs cannot be scored as extras, even if the ball clears the boundary, which is in any case extremely unlikely.

Any runs the batsmen completed by running before the ball reached the edge of the field do not count, unless they are greater than the number of runs that would be scored by the boundary, in which case it is the runs from the boundary that are discounted. 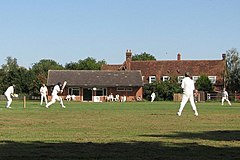 A batsman scoring a six during a game at Chrishall, Essex

The scoring of a four or six by a good aggressive shot displays a certain amount of mastery by the batsman over the bowler, and is usually greeted by applause from the spectators. Fours resulting from an edged stroke, or from a shot that did not come off as the batsman intended, are considered bad luck to the bowler. As a batsman plays himself in and becomes more confident as his innings progresses, the proportion of his runs scored in boundaries often rises.

An average first-class match usually sees between 50 and 150 boundary fours.[citation needed] Sixes are less common, and usually fewer than 10 (and sometimes none) will be scored in the course of a match.

The Laws allow for captains to change the boundary allowances (number of runs scored through either type of boundary) through a pre-match agreement.

Four runs are scored as overthrows if a fielder gathers the ball and then throws it so that no other fielder can gather it before it reaches the boundary. In this case, the batsman who hit the ball scores however many runs the batsmen had run up to that time, plus four additional runs, and it is counted as a boundary. If the ball has not come off the bat or hand holding the bat, then the runs are classified as 'extras' and are added to the team's score but not to the score of any individual batsman.

Four runs (or more) can also be scored by hitting the ball into the outfield and running between the wickets. Four runs scored in this way is referred to as an "all run four" and is not counted as a boundary.

Six runs are scored if the ball does not bounce before passing over the boundary in the air, and then touches the boundary or the ground beyond it.[5]

Prior to 1910, six runs were only awarded for hits out of the ground,[6] with five runs awarded for clearing the boundary.[7] 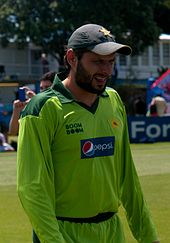 Shahid Afridi holds the world record for most sixes in ODIs. 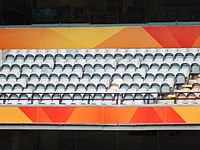 At the MCG a yellow seat marks the biggest six hit at the ground.

In 2012, during the First Test against Bangladesh in Dhaka, West Indies cricketer Chris Gayle became the first player to hit a six off the first ball in a Test cricket match.[10]

Six sixes in an over[edit]

Six sixes in an over in top level domestic cricket[edit]

As of March 2021, this feat has occurred six times in top level domestic cricket.[11]

Six sixes in an over in international cricket[edit]

As of September 2021, this feat has occurred four times in international cricket.[12] No batsman has achieved this feat in Tests.