From Wikipedia, the free encyclopedia
Jump to navigation Jump to search
news division of CBS
For the online network, see CBSN.

Up until April 2021,[1] the president and senior executive producer of CBS News was Susan Zirinsky, who assumed the role on March 1, 2019.[2] Zirinsky, the first female president of the network's news division,[3][4] was announced as the choice to replace David Rhodes on January 6, 2019.[5][6] The announcement came amid news that Rhodes would step down as president of CBS News "amid falling ratings and the fallout from revelations from an investigation into sexual misconduct allegations" against CBS News figures and Rhodes.[7]

In 1929, the Columbia Broadcasting System began making regular radio news broadcasts—five-minute summaries taken from reports from the United Press, one of the three wire services that supplied newspapers with national and international news. In December 1930 CBS chief William S. Paley hired journalist Paul W. White away from United Press as CBS's news editor. Paley put the radio network's news operation at the same level as entertainment, and authorized White to interrupt programming if events warranted. Along with other networks, CBS chafed at the breaking news embargo imposed upon radio by the wire services, which prevented them from using bulletins until they first appeared in print. CBS disregarded an embargo when it broke the story of the Lindbergh kidnapping in 1932, using live on-the-air reporting. Radio networks scooped print outlets with news of the 1932 presidential election.[10]: 485–486

In March 1933, White was named vice president and general manager in charge of news at CBS.[11] As the first head of CBS News, he began to build an organization that soon established a legendary reputation.[10]: 486

"CBS was getting its ducks in a row for the biggest news story in history, World War II", wrote radio historian John Dunning.[10]: 487

Upon becoming commercial station WCBW (channel 2, now WCBS-TV) in 1941, the pioneer CBS television station in New York City broadcast two daily news programs, at 2:30 and 7:30 p.m. weekdays, anchored by Richard Hubbell. Most of the newscasts featured Hubbell reading a script with only occasional cutaways to a map or still photograph. When Pearl Harbor was bombed on December 7, 1941, WCBW (which was usually off the air on Sunday to give the engineers a day off), took to the air at 8:45 p.m. with an extensive special report. The national emergency even broke down the unspoken wall between CBS radio and television. WCBW executives convinced radio announcers and experts such as George Fielding Elliot and Linton Wells to come down to the Grand Central studios during the evening and give information and commentary on the attack. The WCBW special report that night lasted less than 90 minutes. But that special broadcast pushed the limits of live television in 1941 and opened up new possibilities for future broadcasts. As CBS wrote in a special report to the FCC, the unscheduled live news broadcast on December 7 "was unquestionably the most stimulating challenge and marked the greatest advance of any single problem faced up to that time."

Additional newscasts were scheduled in the early days of the war. In May 1942, WCBW (like almost all television stations) sharply cut back its live program schedule and the newscasts were canceled, since the station temporarily suspended studio operations, resorting exclusively to the occasional broadcast of films. This was primarily because much of the staff had either joined the service or were redeployed to war related technical research, and to prolong the life of the early, unstable cameras which were now impossible to repair due to the wartime lack of parts. 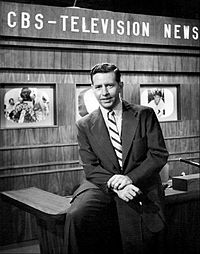 Douglas Edwards on the CBS news set in 1952.

In May 1944, as the war began to turn in favor of the Allies, WCBW reopened the studios and the newscasts returned, briefly anchored by Ned Calmer, and then by Everett Holles.[15] After the war, expanded news programs appeared on the WCBW schedule – whose call letters were changed to WCBS-TV in 1946 – first anchored by Milo Boulton, and later by Douglas Edwards. On May 3, 1948, Edwards began anchoring CBS Television News, a regular 15-minute nightly newscast on the CBS television network, including WCBS-TV. It aired every weeknight at 7:30 p.m., and was the first regularly scheduled, network television news program featuring an anchor (the nightly Lowell Thomas NBC radio network newscast was simulcast on television locally on NBC's WNBT—now WNBC—for a time in the early 1940s and the previously mentioned Richard Hubbell, Ned Calmer, Everett Holles and Milo Boulton on WCBW in the early and mid-1940s, but these were local television broadcasts seen only in New York City). NBC's offering at the time, NBC Television Newsreel (which premiered in February 1948), was simply film footage with voice narration.

In 1950, the name of the nightly newscast was changed to Douglas Edwards with the News, and the following year, it became the first news program to be broadcast on both coasts, thanks to a new coaxial cable connection, prompting Edwards to use the greeting "Good evening everyone, coast to coast." The broadcast was renamed the CBS Evening News when Walter Cronkite replaced Edwards in 1962.[16] Edwards remained with CBS News with various daytime television newscasts and radio news broadcasts until his retirement on April 1, 1988.

The information on programs listed in this section came directly from CBS News in interviews with the Vice President of Communications and NewsWatch Dallas.

According to the CBS News Library and source Sandy Genelius (Vice President, CBS News Communications), the "CBS Evening News" was the program title for both Saturday and Sunday evening broadcasts. The program title for the Sunday late night news beginning in 1963 was the "CBS Sunday Night News". These titles were also seen on the intro slide of the program's opening. The program airs on Saturday, and Sunday nights at 7:00–7:30 PM UTC (Eastern Time) on CBS.

This film, television or video-related list is incomplete; you can help by expanding it with reliably sourced additions.

The branch of CBS News that produces newscasts and features to radio stations is CBS News Radio. The radio network is the oldest unit of CBS and traced its roots to the company's founding in 1927, and the news division took shape over the decade that followed. The list of CBS News correspondents (below) includes those reporting on CBS News Radio.

CBS News Radio produces the oldest daily news show on radio or television, the CBS World News Roundup, which first aired in 1938 and celebrated its 80th anniversary in 2018. The World News Roundup airs twice every weekday: a morning edition is anchored by Steve Kathan and produced by Paul Farry, while a "late edition" is anchored by Dave Barrett and produced by James Hutton. The evening Roundup, previously known as The World Tonight, has aired in its current form since 1956 and has been anchored by Blair Clark, Douglas Edwards, Dallas Townsend and Christopher Glenn (Glenn also anchored the morning Roundup before his death in 2006).

Network News Service (NNS) is a pioneering news organization formed by ABC NewsOne, CBS Newspath and Fox NewsEdge. Launched in June 2000, its subscriber list already includes more than 500 ABC, CBS and Fox affiliates throughout the United States. The three news distributors created NNS to cost-effectively pool resources for developing and delivering second tier news stories and b-roll footage. The goal was to realize cost savings in the creation and distribution of these news images, while news organizations and member television stations continued to independently develop and deliver their own signature coverage of top news stories.

CBSN is a 24-hour streaming news channel available from the CBS News website and launched on November 4, 2014.[41] The channel features live news from 9 a.m. to midnight on weekdays. The channel makes all of the resources of CBS News available directly on digital platforms with live, anchored coverage 15 hours each week. It is a first for a U.S. 24-hour news channel to forgo cable and be available exclusively only online and on smart devices such as smart TV's Apple TV, Roku, Amazon Fire and others.[42] The channel is based at CBS's New York City headquarters.[43]

In 2017, CBS News entered into a content-sharing agreement with BBC News, respectively replacing similar arrangements with the BBC and ABC News, and CBS and Sky News (which was partially controlled by 21st Century Fox until 2018 when ownership was then transferred to Comcast). The partnership includes the ability to share resources, footage, and reports, and conduct "efficient planning of news gathering resources to increase the content of each broadcaster's coverage of world events". And although they don't have an official partnership, CNN and CBS News share correspondents and contributors such as Anderson Cooper and Dr. Sanjay Gupta.[47]