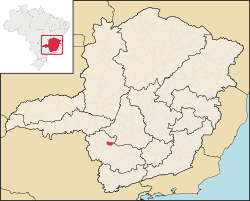 Capitólio is a Brazilian municipality located in the southwest of the state of Minas Gerais. Its population as of 2020[update] was 8,663 people living in a total area of 522 km2.[1] The city belongs to the meso-region of Sul e Sudoeste de Minas and to the micro-region of Passos.

The slogan for the city is "Queen of the Lakes", in reference to its proximity to the Furnas reservoir. With the flooding of the lake part of the old town of Capitólio was submerged. When the water goes down more than 10 meters the old church of the ruins of the town of Guapé can be seen.

In 1939, the district of Capitólio was elevated to the category of village and named as Vila de Capitólio. It became a municipality in 1948.[2]

The city center of Capitólio is located at an elevation of 766 meters east of Passos and bordering on the northern edge of the Furnas reservoir. Neighboring municipalities are: Vargem Bonita (NW), Piumhi (N), Pimenta (E), Guapé (SE and S), São José da Barra (SW), and São João Batista do Glória (W).[3]

The economy is based on services and agriculture, especially cattle raising for dairy production. The region is famous for a type of stone called "pedra mineira", and there are quarries for its mining. Tourism, due to the Furnas reservoir, has been growing in recent years. The GDP in 2005 was approximately R$58 million, with 30 million reais from services, 6 million reais from industry, and 17 million reais from agriculture. There were 475 rural producers on 22,000 hectares of land. 69 farms had tractors (2006). Approximately 1300 persons were occupied in agriculture. The main crops are coffee, soybeans, and corn. There were 18,000 head of cattle, of which 3,000 were milk cows (2006).[6]

In the health sector there were 7 health establishments: 6 public clinics and 1 private hospital with 27 beds (2005). Patients with more serious health conditions are transported to Passos. Educational needs of 1,650 students were met by 7 primary schools, 1 middle school, and 4 pre-primary schools.[8]

Tourism is very important and there are several hotels in the city. The most important are the Balneário do Lago Hotel, Cyrilos Palace Hotel, Hotel Capitólio, Hotel Escarpas do Lago, Hotel Fazenda Engenho da Serra, Hotel Minastur, and Lara's Hotel.[11]