From Wikipedia, the free encyclopedia
Jump to navigation Jump to search
Cricket dismissal method; the ball does not hit the ground after it is batted
For other uses, see Caught (disambiguation).

An Australian fielder runs to take a catch 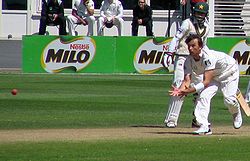 Caught is a method of dismissing a batsman in cricket. A batsman is out caught if the batsman hits the ball, from a legitimate delivery, with the bat, and the ball is caught by the bowler or a fielder before it hits the ground.

If the catch is taken by the wicket-keeper, then informally it is known as caught behind[1] or caught at the wicket.[2] A catch by the bowler is known as caught and bowled.[1] This has nothing to do with the dismissal bowled but is rather a shorthand for saying the catcher and bowler are the same player. (The scorecard annotation is usually c. and b. or c&b followed by the bowler's name.)

This method of dismissal is covered by Law 33 of the Laws of cricket which reads:[6]

The striker is out Caught if a ball delivered by the bowler, not being a No ball, touches his/her bat without having previously been in contact with any fielder, and is subsequently held by a fielder as a fair catch,..., before it touches the ground.

This means that the batsman cannot be out caught if:

Note that if a batsman could be given out both caught and by another method, 'caught' takes precedence, unless the other method is bowled.[8]

If a batsman is out caught, any runs scored off that delivery are voided.

If a batsman is caught, the bowler is credited with the batsman's wicket and the catching fielder is credited for the dismissal, there is no catch assists for a saving boundaries before catch, or deflecting the ball to a different fielder in the slips cordon. If the two batsmen cross each other, in attempting to take a run, before the catch was taken, the non-striking batsman at the time remains at the opposite end of the pitch as the new incoming batsman comes to the crease at his former end. This means, unless it is now a new over, he is now on strike and the incoming batsman is not.

If the catch taken is pronounced or obvious, the players need not appeal to the umpire; the batsman normally chooses to acknowledge the dismissal himself. However, if the ball brushes the edge of the bat, or the catch is taken very close to the ground, or the ball appears to have bounced off the batsman's foot (so it has not touched the ground), or the ball appearing to come off the bat very close to the pitch surface (bump ball), or if the batsman is reluctant to accept that he has been dismissed, then the fielding team has to appeal to the umpire for this decision. In international competition, if neither field umpire can clearly decide if a catch has been made or not, they may refer to the third (television) umpire for a review. The third umpire may also be used if the Umpire Decision Review System is available and a team wishes to dispute a call concerning a possible catch.

Before 2000, the Laws of Cricket defined a catch as being completed when the player had "complete control over the further disposal of the ball". In the very strictest sense, this meant that the player did not finish catching the ball until he threw it away, though the player doesn't have to throw the ball to anyone in particular in so doing.

For this reason, even today many cricketers celebrate a catch by lobbing the ball into the air. In a Super Sixes match in the 1999 Cricket World Cup, South African Herschelle Gibbs caught Australian captain Steve Waugh but Waugh was given not out when Gibbs was ruled to not have control of the ball when attempting to throw the ball in celebration.[9] Waugh went on to score a match-winning 120 not out[10] to qualify his team for the semi-finals; Australia went on to win the tournament.

The wicket-keepers with the highest number of catches taken in Test matches are as follows. Note this excludes catches made while not fielding as a wicket-keeper.

The non-wicket-keepers with the highest number of catches taken in Test matches are as follows. Note this excludes any catches made while fielding as a wicket-keeper.