From Wikipedia, the free encyclopedia
Jump to navigation Jump to search
Part of the Indian Shield in south India 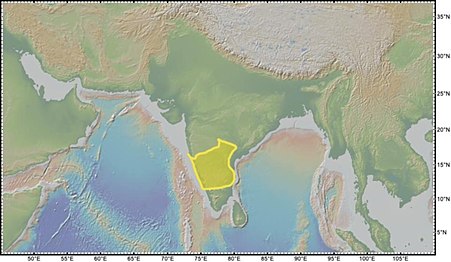 The Dharwar Craton is an Archean continental crust craton formed between 3.6-2.5 billion years ago (Ga), which is located in southern India and considered as the oldest part of the Indian peninsula.[2]

Studies in the 2010s suggest that the craton can be separated into three crustal blocks since they show different accretionary history (i.e., the history of block collisions).[2] The craton includes the western, central and eastern blocks and the three blocks are divided by several shear zones.[2][3]

The formation of the basement rock of the Dharwar Craton was created by intraplate hotspots (i.e., volcanic activities caused by mantle plumes from the core-mantle boundary), the melting of subducted oceanic crust and the melting of thickened oceanic arc crust.[2] The continuous melting of oceanic arc crust and mantle upwelling generated the TTG and sanukitoid plutons over the Dharwar Craton.[5][6]

Overview of the regional geology[edit] 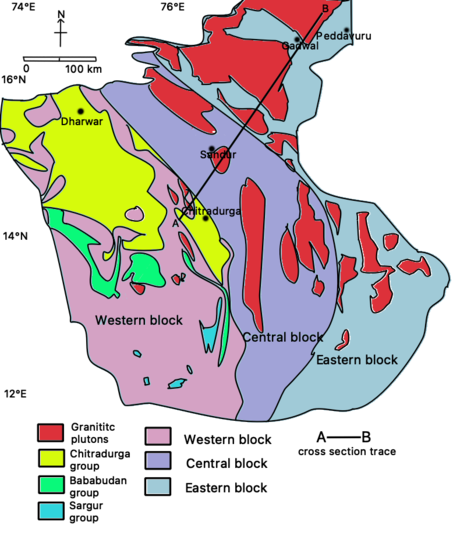 Simplified geological map of the Dharwar Craton, which shows the western, central and eastern blocks. Modified from Jayananda et al., (2018).[2]

As the Dharwar Craton is located in southern India, it is geographically surrounded by the Arabian Sea, the Deccan Trap, the Eastern Ghats Mobile Belt and the Southern Granulite Belt.[7]

Simplified cross-section of the Dharwar Craton from SW to NE, showing the shear zone and the granitic intrusions. Modified from Jayananda et al., (2018).[2]

TTG rocks are intrusive rocks with a granitic composition of quartz and feldspar but contain less potassium feldspar.[10] In Archean craton, TTG rocks are usually present in batholiths formed by plate subduction and melting.[10] Two kinds of gneisses can be found on the Dharwar Craton, which includes the typical TTG-type gneisses (i.e., traditional TTG with a major component of quartz and plagioclase) and the dark grey TTG banded gneisses (relatively more potassium feldspar than typical TTG gneisses):[10]

Sanukitoids are granitoids with high-magnesium compostion that are commonly formed by plate collision events in Archean.[2] In the Dharwar Craton, there is no sanukitoid record in the western block. However, there are a lot of granitoid intrusions in the central block, which become less in the eastern block.[2]

Anatectic granite is a kind of rock formed by the partial melting of the pre-existing crustal rock, which is relatively younger than the TTG and greenstone in the Dharwar Craton.[1] The granites usually cut across the older rocks.[1]

When the rocks were under subductions, they experienced high temperature and pressure leading to the chemical changes and textural changes of rocks (i.e., metamorphism).[2] The mineral assemblages of the metamorphic rocks can tell us how high the temperature and pressure are when they are under the peak metamorphism (the progress with the highest pressure and temperature).[2] The metamorphic rocks in the Dharwar Craton usually recorded the mineral assemblages from amphibolite facies to granulite facies:[2]

Accretions mean the collisions between plates leading to the plate subduction. Crust accretions are important in the Dharwar Craton since the continuous volcanic eruptions caused by accretions led to the formation of Archean felsic continent crust.[2] 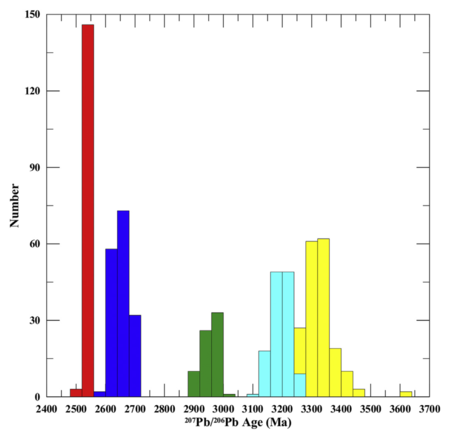 For finding when the Archean crust accretions happened, the parent-daughter isotopes dating, like uranium-lead (U-Pb) decay could be used to find out the ages of the events.[2]

The western block records the two earliest crust accretion events, that happened in 3450 Ma and 3230 Ma.[4] The rates of the continental growth of the two events are fast since the events led to the widespread of greenstone volcanism.[4]

For the central block, the event happened in 3140 Ma is considered as the earliest crustal reworking due to the TTG accretion event between 3230–3140 Ma in the central block of the craton.[19]

For the eastern block, the second highest-temperature reworking event was recorded in the centre of the block, which happened in 2640–2620 Ma.[19] The reworking event is related to the greenstone volcanism of the TTG accretion event in 2700 Ma.[19]

The annotated diagram of the intraplate hotspot model before 3400 Ma, forming the oceanic plateaus. Modified from Jayananda et al, (2018).[2]

Before 3400 Ma, the magma upwelling from the mantle led to the intraplate hotspot setting.[5] The upwelling magma formed the oceanic plateaus with komatiites and komatiitic basalts in the oceanic crust.[5][24] 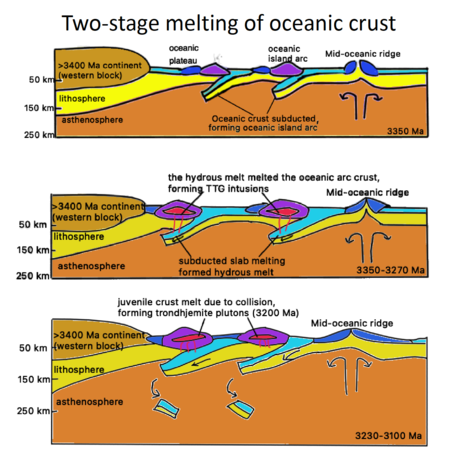 During 3350–3270 Ma, the mafic to ultramafic hydrous melt formed by the slab melting melted the base of the thickened oceanic arc crust, which formed the TTG melt, as well as magmatic protoliths of TTGs in the oceanic arc crust.[2][5]

During 3230–3100 Ma, the continuous collision of the oceanic island arc crust, the TTG and oceanic plateaus, that are formed in the previous stage, caused the melting of the juvenile crust in the oceanic island arc, which generated trondhjemite plutons in 3200 Ma.[26] The trondhjemite emplacement generated heat and fluid that led to the melting that made the low-density TTG crust rose while the high-density greenstone volcanics sank, which developed the dome-keel structures between the TTG and greenstone.[26]

The transitional TTGs, which were recorded in the central and eastern blocks, was formed during 2700–2600 Ma. The transitional TTGs are relatively enriched in incompatible elements.[27] The enrichment of the incompatible elements could be account for the high-angle subduction and the chemical interaction between the mantle wedge and the melt from the subducted crust.[27]

During the 2700 Ma, the central and eastern block of the Dharwar Craton had developed into microcontinents.[28] The weathering and erosion of the microcontinents led to a large amount of detrital input to the ocean floor and subduction zone.[28] Therefore, the subducted slab with a large amount of sediment brought incompatible elements into the mantle due to a high-angle subduction.[28] The mantle wedge interacted with the slab, leading to the partial enrichment of the incompatible elements in the wedge and generated mafic to intermediate magma.[2] The mafic magma rose and accumulated under the oceanic arc crust, leading to the partial melting of the thickened, incompatible element enriched arc crust and their magma mixed to form the transitional TTGs during 2700–2600 Ma.[28]

After the transitional TTG accretion, the inflexible subducted oceanic crust broke and fell into the asthenosphere, leading to the mantle upwelling under the pre-existing crust.[29] The upwelling mantle rock rose to the shallow depth and melted the upper mantle to generate intermediate to mafic magma.[29] Then, the magma intruded into the middle part of the crust.[29] It underwent differentiation in magma chambers.[29] The heat from the magma transferred into the surrounding rock leading to the partial melting of gneisses and the formation of calc-alkaline granitoids.[29] 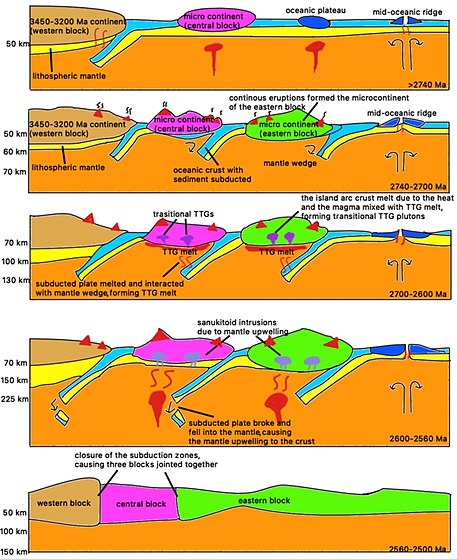 The model showing the transitional TTG accretion, shifting from the melting of oceanic crust to the melting of the mantle, as well as the sanukitoid magmatism during 2740-2500 Ma. Modified from Jayananda et al, (2013, 2018).[2][1]

Sanukitoids were formed during the Neoarchean magmatic accretion events, that are originated from the mantle with low silicon dioxide and high magnesium.[30] The sanukitoid magma could be generated by either plate subduction or plume setting.[30]

The sanukitoid magmatism is not related to the TTG accretion events during 3450–3000 Ma.[2] The magmatism was followed by the transitional TTG accretion event in 2600 Ma and only occurred in the central and eastern blocks.[2] Since the sanukitoids are enriched in both incompatible and compatible elements, while the TTGs are not, it indicates the appearance of the sanukitoid magmatism shows the tectonic change from melting of oceanic crust to melting of mantle during the period of 2600–2500 Ma.[2]

During 2560–2500 Ma, the three blocks joined together to form the Dharwar Craton and all the subduction zones closed, followed by the regional metamorphism due to heat release from the mantle during 2535–2500 Ma.[33] The final cratonisation finished in 2400 Ma through slow cooling.[33]