From Wikipedia, the free encyclopedia
Jump to navigation Jump to search
American actress and singer

Dove Olivia Cameron[1][2] (born Chloe Celeste Hosterman; January 15, 1996[3]) is an American singer and actress. She played a dual role as the eponymous characters in the Disney Channel comedy series Liv and Maddie, for which she won the Daytime Emmy Award for Outstanding Performer in Children's Programming. She has also portrayed Mal in the Descendants film series.

In 2016, Cameron starred in the NBC live television musical Hairspray Live!, which earned her a nomination for Best Musical Moment at the 2017 MTV Movie & TV Awards, for her performance of "You Can't Stop the Beat". On stage, from 2018 to 2019, she played the role of Cher Horowitz in an off-Broadway rendition of the 1995 film Clueless, and in 2019, she debuted on the London stage with her portrayal of Clara Johnson in the musical The Light in the Piazza.

As a singer, Cameron made her debut with the soundtrack album to Liv and Maddie (2015). In the same year, she released her debut single, "If Only", for Descendants. Her debut musical release, Bloodshot / Waste, was released in 2019. In 2022, she released the single "Boyfriend", which became her first solo song to chart on the Billboard Hot 100, and peaked in the top 20.

Cameron was born Chloe Celeste Hosterman on January 15, 1996, in Bainbridge Island, Washington.[4][5] She is the daughter of Philip Alan Hosterman and Bonnie Wallace, who later divorced, and has an older sister, Claire Hosterman.[6] When she was a child, she attended Sakai Intermediate School.[6] At age eight, Cameron began acting in community theater at Bainbridge Performing Arts.[7] When she was fourteen, her family moved to Los Angeles, California, where she sang in Burbank High School's National Championship Show Choir.[8]

Cameron has stated that she is of French descent and that she speaks some French.[9][10] She also has Russian, Slovak and Hungarian ancestry.[11] She has said she was bullied throughout her entire school experience, from fifth grade through the end of high school. Regardless of the pressure at school and fitting in, she stayed focused on her dreams of achieving success in entertainment: "I became very passionate about [becoming an actress and singer]. I fully immersed myself". Her father died in 2011 when she was 15.[12] Following his death, Cameron changed her legal name to Dove in honor of her father who called her by that nickname.[13][14]

In 2007, Cameron portrayed the role of Young Cosette in the Bainbridge Performing Arts (BPA) stage production of Les Misérables, and in 2008, she had the lead role of Mary in The Secret Garden, again with BPA.[15] In 2012, Cameron was cast in a Disney Channel comedy series that was to be titled Bits and Pieces in which she would play the role of Alanna. Shortly after filming the pilot, Bits and Pieces was retooled into Liv and Maddie, which saw Cameron starring in the dual lead role of Liv and Maddie Rooney. The preview of the series debuted on July 19, 2013 (2013-07-19),[16] and the series premiered on September 15, 2013.[17] The pilot episode gained 5.8 million viewers, which was the most-watched in total viewers in 2.5 years since the series Shake It Up![18] Disney Channel renewed Liv and Maddie for a 13-episode second season slated to premiere in Fall 2014,[19] which was later expanded to 24 episodes.[20]

On August 27, 2013, Cameron released a cover of "On Top of the World" by Imagine Dragons as a promotional single.[21] Her cover peaked on the Billboard Kid Digital Songs chart at 17 and spent three weeks on the chart.[22] On October 15, 2013, "Better In Stereo" was released as a single under Walt Disney Records.[23] "Better In Stereo" made its debut on the Billboard Kid Digital Songs chart at No. 21 before peaking at No. 1, becoming Cameron's first No. 1 hit.[22] In February 2014, Cameron confirmed reports that recording had begun for her debut studio album.[24] Her next single, "Count Me In", was released on June 3, 2014.[25] The song peaked at number one on the Billboard Kids Digital Songs chart.[22] In 2015, Cameron played Liz Larson in her first non-Disney film, Barely Lethal, which was theatrically released by A24 Films.[26]

Cameron starred in the television film Descendants which premiered on July 31, 2015.[27] The film was viewed by 6.6 million people and spawned Cameron's two first Billboard Hot 100 songs, "Rotten to the Core" at number 38[28] and a solo song, "If Only", at number 94.[29] Other songs from the film featuring Cameron such as "Set It Off" and "Evil Like Me" charted at number 6 and 12 respectively on the Bubbling Under Hot 100 chart.[30] The soundtrack for the movie peaked atop the Billboard 200 chart becoming the first soundtrack from a Disney Channel Original Movie since High School Musical 2 to do so.[31] As part of the Descendants franchise, Cameron released a cover of the Christina Aguilera's song "Genie in a Bottle". The music video premiered on Disney Channel on March 18, 2016. The single received 22 million views in less than a month.[32][33]

In 2015, Cameron and Ryan McCartan formed a band called The Girl and the Dreamcatcher.[34] On October 2, 2015, they released their first single, "Written in the Stars".[35] The band released their second single, "Glowing in the Dark", on January 29, 2016.[36] The Girl and the Dreamcatcher released their third single, "Someone You Like", on April 8, 2016. They released their fourth single, "Make You Stay", on June 17, 2016.[37] On July 29, 2016, the band released their first EP, Negatives, featuring their singles "Make You Stay" and "Glowing in the Dark" and four new songs.[38] In October 2016, as a result of Cameron's and McCartan's breakup, the musical duo disbanded.[39] On December 22, 2015, Liv and Maddie was renewed for a fourth season, becoming the ninth live-action Disney Channel series in history to achieve this.[40] Cameron began filming the season, renamed to Liv and Maddie: Cali Style in early 2016.[41] It was later announced that this would be the final season of the series.[42] The series finale of Liv and Maddie later aired on March 24, 2017.[43] 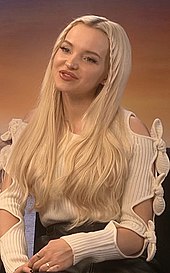 Cameron played the role of Amber Von Tussle in the NBC live television presentation of Hairspray Live!, which aired on December 7, 2016.[44][45][46] Reception was generally positive, and Cameron's performance was praised.[47] Cameron reprised her role as Mal in Descendants 2, the sequel to Descendants, in 2017.[48][49] The film premiered on July 21, 2017. The Descendants 2 soundtrack debuted at number six on the Billboard 200, with "It's Goin' Down" from the soundtrack debuting at number 81.[50] Cameron then played the role of Sophie in the Hollywood Bowl live production of Mamma Mia!. The production took place from July 28, 2017, to July 30, 2017.[51]

On August 21, 2017, Cameron was cast in the Netflix film Dumplin', alongside Jennifer Aniston.[52] Cameron played Bekah Cotter in the comedy. In November 2017, Cameron signed on to appear in a recurring role in the fifth season of Agents of S.H.I.E.L.D.[53] by Marvel. This role was later revealed to be Ruby, the daughter of General Hale (Catherine Dent).[54] In December 2017, Cameron was cast in an animated Marvel project, Marvel Rising, as the voice of Gwen Stacy / Ghost-Spider.[55][56] On August 13, 2018, Marvel Rising: Initiation, a series of six shorts, was released on Disney XD. The series focused on Cameron's character as she was on the run after being framed for her best friend's murder. Though her character did not appear in the next Marvel Rising installment, Marvel Rising: Secret Warriors, Cameron did perform the film's theme song, "Born Ready".[57] In 2019, Cameron reprised the role in Marvel Rising: Chasing Ghosts.[58]

On March 21, 2018, she announced that she had signed with Columbia's Disruptor Records label, and that she would begin to release music following the release of Descendants 3.[59] In September 2019, Cameron released two covers on her YouTube channel: "Slow Burn" and "Hymn for the Weekend".[60][61] It was announced on October 8, 2018, that Cameron will play the role of Cher Horowitz in the stage adaptation of the 1995 film Clueless.[62] In 2019, Cameron starred alongside Renée Fleming in The Light in the Piazza in London.[63] On September 27, 2019, Cameron released her debut double A-side, Bloodshot / Waste.[64] Then on November 1, 2019, she released her followup single, "So Good".[65][66] Later that month, she collaborated with Privé Revaux on a range of sunglasses.[67] Cameron continued her focus on music by releasing singles "Out of Touch"[68] and "Remember Me", the latter of which features American rapper Bia.[69] On July 24, 2020, she released her next single, "We Belong".[70] This was followed by the release of "LazyBaby" on April 2, 2021.[71] Later that year, Cameron joined the main cast of the Apple TV+ musical series Schmigadoon!, which premiered on July 16, 2021.[72] Also in 2021, Cameron reprised her role as Mal for the animated special Descendants: The Royal Wedding.[73] She has also been cast in the upcoming CW series The Powerpuff Girls as Bubbles,[74] as well as the upcoming film Field Notes on Love alongside Liv and Maddie co-star Jordan Fisher.[75]

In 2022, she voiced Ellen Wright, Nate's sister in the Paramount+ Nicktoon Big Nate.[76] She released the song "Boyfriend" in February which became her first non-soundtrack song to chart on the Billboard Hot 100.[77] On June 24, 2022, Cameron released the song "Breakfast".[78]