Eliud Kipchoge (English: /ˌɛliˈuːd kɪpˈtʃoʊɡə/ EL-ee-OOD kip-CHOH-gə; born 5 November 1984) is a Kenyan professional long-distance runner who competes in the marathon and formerly competed at the 5000 metre distance. He is the 2016 and 2020 Olympic marathon champion, and holds the world record in the marathon with a time of 2:01:39 set at the 2018 Berlin Marathon. His run broke the previous world record by 1 minute and 18 seconds.[2] He is widely regarded as the greatest ever marathon runner and one of the greatest sportsmen in history.[3]

He switched to road running in 2012 and made the second-fastest half marathon debut ever, at 59:25. In his marathon debut, he won the 2013 Hamburg Marathon in a course record time. His first victory at a World Marathon Major came at the Chicago Marathon in 2014, and he went on to become series champion for 2016, 2017, 2018 and 2019. He has won the London Marathon a record four times. His only losses in a marathon were a second-place finish behind Wilson Kipsang Kiprotich at the 2013 Berlin Marathon, where Kipsang broke the world record, and an eighth-place finish at the 2020 London Marathon.[4][5][6]

On 12 October 2019, Kipchoge ran the marathon distance for the Ineos 1:59 Challenge in Vienna, Austria, achieving a time of 1:59:40.2.[7] The run did not count as a new marathon record, as standard competition rules for pacing and fluids were not followed and it was not an open event.[8][9][10]

Kipchoge was born on 5 November 1984 in Kapsisiywa, Nandi County, in Kenya. Kipchoge graduated from Kaptel Secondary School in 1999 but did not run seriously or as a profession then.[11][12] He ran two miles (3.2 km) to school on a daily basis.[13] Kipchoge was raised by a single mother (a teacher), and only knew his father from pictures. He is the youngest of four children. He met his trainer Patrick Sang (a former Olympic medalist in the steeplechase) in 2001 at the age of 16.[14] 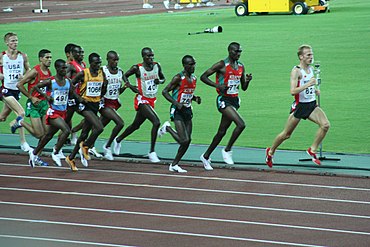 Kipchoge (third from the right) during the 5000 m heat in the 2007 IAAF World Championship in Osaka. He won a silver medal in the final.

In 2004, Kipchoge won a bronze medal at the 5000 m final at the 2004 Athens Olympics, behind El Guerrouj and Kenenisa Bekele.[21] He also won the Trofeo Alasport cross country race earlier that season.

Kipchoge won the bronze in the 3000 metres indoor at the 2006 World Championships in Moscow.

At the end of the year, Kipchoge won the San Silvestre Vallecana New Year's Eve 10 km road race in a time of 26:54 minutes, which beat his own course record by 40 seconds. This time was also better than the 10K track world record at the time, but was run on a downhill course.[22]

During the 2008 Olympics held in Beijing, China, Kipchoge won a silver medal in the 5000 m event with a time of 13:02.80; although better than the previous Olympic record of 13:05.59, it was not enough to match Kenenisa Bekele's pace, who won the gold medal for this race.[24] On the circuit, he won the Great Yorkshire Run 10K and Campaccio Cross Country that year.

He failed to reach the podium at the 2009 World Championships in Athletics, finishing in fifth place and he also finished ninth in the 3000 m at the 2009 IAAF World Athletics Final.

He made his debut on the 2010 IAAF Diamond League by winning the 5000 m Qatar Athletic Super Grand Prix in a meet record time.[25]

Kipchoge then went on to enter the Carlsbad 5000 in CA, USA. The Carlsbad 5 km road race is the venue for the world best times for a 5k road race for men and women respectively. The fastest to cover the track was Sammy Kipketer in 2000, with 12:59.52 min.[26] Kipchoge made a world best attempt and although he won the race, weather affected his chances and he finished in 13:11, the fourth-fastest ever for the course up to that point in time.[27]

In the first athletics final of the 2010 Commonwealth Games, he attempted to win the 5000 m Commonwealth title. Ugandan runner Moses Kipsiro held a slender lead over him in the final stages of the race and Kipchoge ended up in second place, taking the silver medal some seven hundredths of a second behind.[28][29] He flew back to Europe immediately after to take part in the Belgrade Race through History the following day. His shoe fell off in the first kilometre and, after putting it back on, he made up much ground on the field to eventually take second place two seconds behind Josphat Menjo.[30]

At the start of 2011, he won the short race at the Great Edinburgh Cross Country, ahead of Asbel Kiprop.[31] He attempted to retain his title at the Carlsbad 5000 in April but came a close second behind Dejen Gebremeskel.[32] In May he raced the 3000 metres (finished third) in Doha, with a time of 7:27.66 and ranked him as the 12th-fastest at the distance up to this point.[33] Kipchoge was chosen to represent Kenya at the 2011 World Championships in Athletics and reached the 5000 m final for the fifth consecutive time, although he only managed seventh place on this occasion.

Kipchoge returned to the Edinburgh Cross Country in 2012, but this time he finished third behind Asbel Kiprop and Britain's Jonathan Hay.[34] He was also third at the Carlsbad 5000 in March.[35] He attempted to gain a place on the 10,000 m Olympic team at the Prefontaine Classic, but fell back in the late stages of the Kenyan trial race, finishing seventh.[36] A seventh-place finish in the Kenyan 5000 m trial race meant he would not make a third consecutive Olympic team.[37] 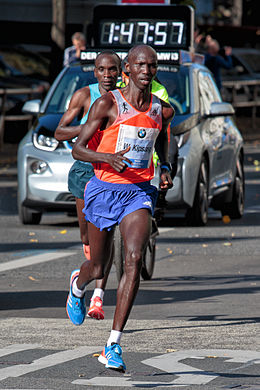 Wilson Kipsang (front) and Kipchoge (behind) running in the Berlin Marathon 2013 in which Kipsang set the world record with 2:03:23 and Kipchoge, racing in his second marathon, finished second, 42 seconds later.

Kipchoge opened his 2013 season with a win at the Barcelona Half Marathon in a time of one hour and four seconds.[41] Making his marathon debut in April, he demonstrated a smooth transition to the longer distance by taking the Hamburg Marathon title with a run of 2:05:30 hours—beating the field by over two minutes and setting a new course record.[42] In August 2013, he won the Half Marathon of Klagenfurt in 1:01:02 minutes.[43]

Kipchoge won the Berlin Marathon in 2015. His win and then-personal-best time (2:04:00) occurred even though his shoes malfunctioned, causing his insoles to flap out of both shoes from 10 km onward; rather than risk time lost from an adjustment, he finished the race with bloodied, blistered feet.[47]

In April 2016, Kipchoge won the London Marathon for the second consecutive year in a time of 2:03:05.[48] His performance broke the course record in London, and became the second-fastest marathon time in history, missing Dennis Kimetto's world record by 8 seconds.[49]

As the prerace favourite, during the 2016 Summer Olympics, Kipchoge gained a gold medal in the marathon event.[50][51][52] On the last day of the Rio Olympics on 21 August 2016 he won in a time of 2:08:44. The runner up was Feyisa Lilesa (Ethiopia) 2:09:54 and the bronze medal went to Galen Rupp (USA), doing his second marathon, crossing the finish line in 2:10:05. When the halfway point after 21.0975 km was reached, 37 men were within 10 seconds of the lead runner. The participants field diminished to 3 lead runners shortly before 34 km. Kipchoge made his final move on silver medal winner Lilesa around 36 km into the race. He covered the first half of the race in 1:05:55, while doing the second half in 1:02:49, that amounts to a difference of more than 3 minutes, a negative split.[53][54] The winning gap between Kipchoge and Lilesa by 70 seconds was the largest victory margin since the 1972 Olympic marathon.[55] Kipchoge's winning time of 2:08:44 is his slowest marathon time (as of August 2021). One hundred fifty-five runners started the race, which amounted to the largest field in Olympic history; 140 of them finished the race.[56][57] With this win, Kipchoge became the second Kenyan male after Sammy Wanjiru in Beijing 2008 to win an Olympic marathon gold medal. At the same Olympics, the women's marathon was won by Jemima Sumgong in turn she became the first female Kenyan winner.[58][54]

On 24 September 2017, he won the Berlin Marathon in a time of 2:03:32.[64] In rainy conditions, he finished 14 seconds ahead of Guye Adola who ran his first marathon. Adola set the fastest marathon debut ever.[65] Former marathon world record holder Wilson Kipsang and 2016 winner Kenenisa Bekele failed to finish.[66][67]

"Whatever happens, this will surely go down as Kipchoge's crowning glory, his marathon opus. It would be no surprise if his record stood for a generation, unless, of course, he himself has other ideas."

"In an astonishing performance at the 2018 BMW Berlin Marathon, Kipchoge took marathoning into a new stratosphere by clocking 2:01:39 – the first man ever under 2:02, and a full 78 seconds faster than Dennis Kimetto's four-year-old world record.

It was a performance so far superior to anything we've seen before that comparing it to another marathon feels inadequate. This was Wilt Chamberlain's 100-point game in basketball, Usain Bolt's 9.58 in the 100-meter dash. 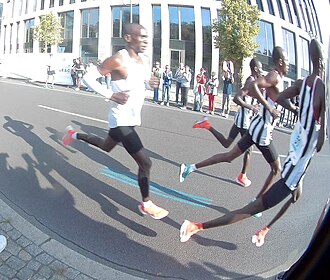 Eliud Kipchoge (left) and his three pacers (right) about 30 minutes into the run, during the Marathon world record in the 2018 Berlin Marathon. He is shown a few seconds before crossing the river Spree.

In May 2019, a few days after his London Marathon win, Kipchoge announced another take on the sub-two-hour marathon, named the Ineos 1:59 Challenge. On 12 October 2019 in Vienna's Prater park, he ran 4.4 laps of the Hauptallee in 1:59:40, becoming the first person in recorded history to break the two-hour barrier over a marathon distance.[85][86][87]

The effort did not count as a new world record under IAAF rules due to the setup of the challenge. Specifically, it was not an open event, Kipchoge was handed fluids by his support team throughout, the run featured a pace car, and included rotating teams of other runners pacing Kipchoge in a formation designed to reduce wind resistance and maximise efficiency.[88][89] The achievement was recognised by Guinness World Records with the titles 'Fastest marathon distance (male)' and 'First marathon distance run under two hours'.[90][91]

In preparation for the 2020 Tokyo Olympic Games, Eliud Kipchoge won the NN Mission Marathon, which was held at Enschede Airport Twente in the Netherlands, on 18 April 2021 in a time of 2:04:30 and Jonathan Korir finished as the runner up with a personal best of 2:06:40.[92]

Kipchoge successfully defended his gold medal from the Rio games by winning the gold medal in the men's marathon at the Tokyo Games in a time of 2:08:38, becoming only the third person to successfully defend their gold medal in the men's marathon, after Abebe Bikila in 1960 and 1964, and Waldemar Cierpinski in 1976 and 1980.[93] He was the favourite to win and attacked around the 30 km mark, looking back only once afterwards. The silver medal went to Abdi Nageeye (Netherlands) who finished 80 seconds after Kipchoge. Bashir Abdi (Belgium) came in third for a bronze medal with 2:10:00. Kipchoge is the oldest Olympic marathon winner since Carlos Lopes won in 1984 at the age of 37. The run was staged 500 miles north of Tokyo in Sapporo, Japan with 106 runners participating in the race.[94] A documentary on the Ineos 1:59 Challenge, titled Kipchoge: The Last Milestone, was released digitally on-demand on 24 August 2021.

On 20 January, Kipchoge announced his desire to win all 6 Abbott World Marathons Majors (he had already won 3, the London, Berlin, and Chicago marathons, by that time). This was followed up by an announcement on 18 February that Kipchoge would be participating in the 2021 Tokyo Marathon (which would be held on 6 March 2022 due to COVID-19 restrictions in 2021), and that the majority of his recent training has been dedicated towards this goal.[95]

(*) Officially billed as the 2021 Tokyo Marathon, the race took place on 6 March 2022 after the 2021 edition was postponed because of the COVID-19 pandemic. As a consequence of this postponement, the 2022 Tokyo Marathon was cancelled.

(x) Cancelled due to the COVID-19 pandemic.

(p) Postponed due to the COVID-19 pandemic.