From Wikipedia, the free encyclopedia
Jump to navigation Jump to search
Root-finding algorithm 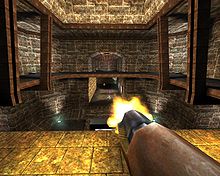 Lighting and reflection calculations (shown here in the first-person shooter OpenArena) use the fast inverse square root code to compute angles of incidence and reflection.

Fast inverse square root, sometimes referred to as Fast InvSqrt() or by the hexadecimal constant 0x5F3759DF, is an algorithm that estimates

, the reciprocal (or multiplicative inverse) of the square root of a 32-bit floating-point number

in IEEE 754 floating-point format. This operation is used in digital signal processing to normalize a vector, i.e., scale it to length 1. For example, computer graphics programs use inverse square roots to compute angles of incidence and reflection for lighting and shading. The algorithm is best known for its implementation in 1999 in the source code of Quake III Arena, a first-person shooter video game that made heavy use of 3D graphics. The algorithm only started appearing on public forums such as Usenet in 2002 or 2003.[note 1] Computation of square roots usually depends upon many division operations, which for floating point numbers are computationally expensive. The fast inverse square generated a good approximation with only one division step. Other video games predating Quake 3 have been discovered which use a similar algorithm, though the Quake implementation remains the best-known example.

The algorithm accepts a 32-bit floating-point number as the input and stores a halved value for later use. Then, treating the bits representing the floating-point number as a 32-bit integer, a logical shift right by one bit is performed and the result subtracted from the number 0x5F3759DF (in decimal notation: 1,597,463,007), which is a floating point representation of an approximation of

.[2] This results in the first approximation of the inverse square root of the input. Treating the bits again as a floating-point number, it runs one iteration of Newton's method, yielding a more precise approximation.

The algorithm was originally attributed to John Carmack, but an investigation showed that the code had deeper roots in both the hardware and software side of computer graphics. Adjustments and alterations passed through both Silicon Graphics and 3dfx Interactive, with the original constant being derived in a collaboration between Cleve Moler and Gregory Walsh, while Gregory was working for Ardent Computing in the late 1980s.[3] Walsh and Moler adapted their version from an unpublished paper by William Kahan and K.C. Ng circulated in May of 1986.

With subsequent hardware advancements, especially the x86 SSE instruction rsqrtss, this method is not generally applicable to general purpose computing,[4] though it remains an interesting example both historically[5] and for more limited machines, such as low-cost embedded systems. However, more manufacturers of embedded systems are including trigonometric and other math accelerators such as CORDIC, obviating the need for such algorithms. 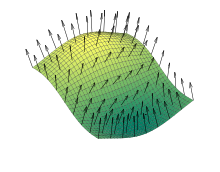 Surface normals are used extensively in lighting and shading calculations, requiring the calculation of norms for vectors. A field of vectors normal to a surface is shown here.

A two-dimensional example of using the normal

to find the angle of reflection from the angle of incidence; in this case, on light reflecting from a curved mirror. The fast inverse square root is used to generalize this calculation to three-dimensional space.

The inverse square root of a floating point number is used in calculating a normalized vector.[6] Programs can use normalized vectors to determine angles of incidence and reflection. 3D graphics programs must perform millions of these calculations every second to simulate lighting. When the code was developed in the early 1990s, most floating-point processing power lagged behind the speed of integer processing.[7] This was troublesome for 3D graphics programs before the advent of specialized hardware to handle transform and lighting.

The length of the vector is determined by calculating its Euclidean norm: the square root of the sum of squares of the vector components. When each component of the vector is divided by that length, the new vector will be a unit vector pointing in the same direction. In a 3D graphics program, all vectors are in three-dimensional space, so

would be a vector

is the Euclidean norm of the vector.

is the normalized (unit) vector, using

because this equation is equivalent to

where the fraction term is the inverse square root of

The following code is the fast inverse square root implementation from Quake III Arena, stripped of C preprocessor directives, but including the exact original comment text:[9]

At the time, the general method to compute the inverse square root was to calculate an approximation for

, then revise that approximation via another method until it came within an acceptable error range of the actual result. Common software methods in the early 1990s drew approximations from a lookup table.[10] The key of the fast inverse square root was to directly compute an approximation by utilizing the structure of floating-point numbers, proving faster than table lookups. The algorithm was approximately four times faster than computing the square root with another method and calculating the reciprocal via floating-point division.[11] The algorithm was designed with the IEEE 754-1985 32-bit floating-point specification in mind, but investigation from Chris Lomont showed that it could be implemented in other floating-point specifications.[12]

The advantages in speed offered by the fast inverse square root trick came from treating the 32-bit floating-point word[note 2] as an integer, then subtracting it from a "magic" constant, 0x5F3759DF.[7][13][14][15] This integer subtraction and bit shift results in a bit pattern which, when re-defined as a floating-point number, is a rough approximation for the inverse square root of the number. One iteration of Newton's method is performed to gain some accuracy, and the code is finished. The algorithm generates reasonably accurate results using a unique first approximation for Newton's method; however, it is much slower and less accurate than using the SSE instruction rsqrtss on x86 processors also released in 1999.[4][16]

As an example, the number

can be used to calculate

. The first steps of the algorithm are illustrated below:

, which has an error of about 3.4%. After one single iteration of Newton's method, the final result is

In C++ the usual method for implementing this function's casts is through C++20's std::bit_cast. This also allows the function to work in constexpr context:

by performing the following steps:

Since this algorithm relies heavily on the bit-level representation of single-precision floating-point numbers, a short overview of this representation is provided here. In order to encode a non-zero real number

as a single precision float, the first step is to write

as a normalized binary number:[17]

is the binary representation of the "significand"

. Since the single bit before the point in the significand is always 1, it need not be stored. From this form, three unsigned integers are computed:[18]

These fields are then packed, left to right, into a 32-bit container.[19]

As an example, consider again the number

and thus, the three unsigned integer fields are:

these fields are packed as shown in the figure below:

Aliasing to an integer as an approximate logarithm[edit]

were to be calculated without a computer or a calculator, a table of logarithms would be useful, together with the identity

, which is valid for every base

. The fast inverse square root is based on this identity, and on the fact that aliasing a float32 to an integer gives a rough approximation of its logarithm. Here is how:

is a positive normal number:

, the logarithm on the right hand side can be approximated by[20]

is a free parameter used to tune the approximation. For example,

yields exact results at both ends of the interval, while

yields the optimal approximation (the best in the sense of the uniform norm of the error). However, this value is not used by the algorithm as it does not take subsequent steps into account. 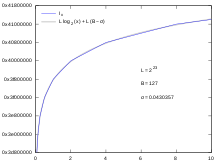 The integer aliased to a floating point number (in blue), compared to a scaled and shifted logarithm (in gray).

Thus there is the approximation

Interpreting the floating-point bit-pattern of

It then appears that

is a scaled and shifted piecewise-linear approximation of

, as illustrated in the figure on the right. In other words,

First approximation of the result[edit]

is based on the identity

Using the approximation of the logarithm above, applied to both

, the above equation gives:

Thus, an approximation of

which is written in the code as

The first term above is the magic number

from which it can be inferred that

, is calculated by shifting the bits of

one position to the right.[21]

as the inverse square root,

. The approximation yielded by the earlier steps can be refined by using a root-finding method, a method that finds the zero of a function. The algorithm uses Newton's method: if there is an approximation,

, then a better approximation

can be calculated by taking

is the derivative of

By repeating this step, using the output of the function (

) as the input of the next iteration, the algorithm causes

to converge to the inverse square root.[23] For the purposes of the Quake III engine, only one iteration was used. A second iteration remained in the code but was commented out.[15]

As noted above, the approximation is surprisingly accurate. The single graph on the right plots the error of the function (that is, the error of the approximation after it has been improved by running one iteration of Newton's method), for inputs starting at 0.01, where the standard library gives 10.0 as a result, while InvSqrt() gives 9.982522, making the difference 0.0017478, or 0.175% of the true value, 10. The absolute error only drops from then on, while the relative error stays within the same bounds across all orders of magnitude.

The source code for Quake III was not released until QuakeCon 2005, but copies of the fast inverse square root code appeared on Usenet and other forums as early as 2002 or 2003.[7] Initial speculation pointed to John Carmack as the probable author of the code, but the original authors proved to be much further back in the history of 3D computer graphics. Rys Sommefeldt concluded that the original algorithm was devised by Greg Walsh at Ardent Computer in consultation with Cleve Moler, the creator of MATLAB.[3] Cleve Moler learned about this trick from code written by William Kahan and K.C. Ng at Berkeley around 1986.[24][25]

Jim Blinn also demonstrated a simple approximation of the inverse square root in a 1997 column for IEEE Computer Graphics and Applications.[26][27] Reverse engineering of other contemporary 3d video games uncovered a variation of the algorithm in Activision's 1997 Interstate '76, two years before Quake 3 Arena was published.[28]

It is not known precisely how the exact value for the magic number was determined. Chris Lomont developed a function to minimize approximation error by choosing the magic number

over a range. He first computed the optimal constant for the linear approximation step as 0x5F37642F, close to 0x5F3759DF, but this new constant gave slightly less accuracy after one iteration of Newton's method.[29] Lomont then searched for a constant optimal even after one and two Newton iterations and found 0x5F375A86, which is more accurate than the original at every iteration stage.[29] He concluded by asking whether the exact value of the original constant was chosen through derivation or trial and error.[30] Lomont said that the magic number for 64-bit IEEE754 size type double is 0x5FE6EC85E7DE30DA, but it was later shown by Matthew Robertson to be exactly 0x5FE6EB50C7B537A9.[31]

Jan Kadlec reduced the relative error by a further factor of 2.7 by adjusting the constants in the single Newton's method iteration as well,[32] arriving after an exhaustive search at

A complete mathematical analysis for determining the magic number is now available for single-precision floating-point numbers.[33][34]

. The update step is then

where the implementation should calculate

only once, via a temporary variable.