From Wikipedia, the free encyclopedia
Jump to navigation Jump to search
Metabolic process
For other uses, see Fermentation (disambiguation).
Not to be confused with Anaerobic respiration. 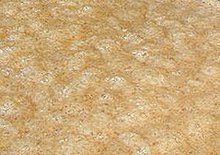 Fermentation in progress: Bubbles of CO2 form a froth on top of the fermentation mixture.

Fermentation is a metabolic process that produces chemical changes in organic substrates through the action of enzymes. In biochemistry, it is narrowly defined as the extraction of energy from carbohydrates in the absence of oxygen. In food production, it may more broadly refer to any process in which the activity of microorganisms brings about a desirable change to a foodstuff or beverage.[1] The science of fermentation is known as zymology.

In microorganisms, fermentation is the primary means of producing adenosine triphosphate (ATP) by the degradation of organic nutrients anaerobically. Humans have used fermentation to produce foodstuffs and beverages since the Neolithic age. For example, fermentation is used for preservation in a process that produces lactic acid found in such sour foods as pickled cucumbers, kombucha, kimchi, and yogurt, as well as for producing alcoholic beverages such as wine and beer. Fermentation also occurs within the gastrointestinal tracts of all animals, including humans.[2]

Below are some definitions of fermentation. They range from informal, general usages to more scientific definitions.[3]

Along with aerobic respiration, fermentation is a method to extract energy from molecules. This method is the only one common to all bacteria and eukaryotes. It is therefore considered the oldest metabolic pathway, suitable for primeval environments – before plant life on Earth, that is, before oxygen in the atmosphere.[4]: 389

Yeast, a form of fungus, occurs in almost any environment capable of supporting microbes, from the skins of fruits to the guts of insects and mammals to the deep ocean. Yeasts convert (break down) sugar-rich molecules to produce ethanol and carbon dioxide.[5][6]

Basic mechanisms for fermentation remain present in all cells of higher organisms. Mammalian muscle carries out fermentation during periods of intense exercise where oxygen supply becomes limited, resulting in the creation of lactic acid.[7]: 63  In invertebrates, fermentation also produces succinate and alanine.[8]: 141

Fermentative bacteria play an essential role in the production of methane in habitats ranging from the rumens of cattle to sewage digesters and freshwater sediments. They produce hydrogen, carbon dioxide, formate and acetate and carboxylic acids. Then consortia of microbes convert the carbon dioxide and acetate to methane. Acetogenic bacteria oxidize the acids, obtaining more acetate and either hydrogen or formate. Finally, methanogens (in the domain Archea) convert acetate to methane.[9]

Fermentation reacts NADH with an endogenous, organic electron acceptor.[11] Usually this is pyruvate formed from sugar through glycolysis. The reaction produces NAD+ and an organic product, typical examples being ethanol, lactic acid, and hydrogen gas (H2), and often also carbon dioxide. However, more exotic compounds can be produced by fermentation, such as butyric acid and acetone. Fermentation products are considered waste products, since they cannot be metabolized further without the use of oxygen.[12]

Fermentation normally occurs in an anaerobic environment. In the presence of O2, NADH, and pyruvate are used to generate ATP in respiration. This is called oxidative phosphorylation. This generates much more ATP than glycolysis alone. It releases the chemical energy of O2.[12] For this reason, fermentation is rarely used when oxygen is available. However, even in the presence of abundant oxygen, some strains of yeast such as Saccharomyces cerevisiae prefer fermentation to aerobic respiration as long as there is an adequate supply of sugars (a phenomenon known as the Crabtree effect).[13] Some fermentation processes involve obligate anaerobes, which cannot tolerate oxygen.[citation needed]

In ethanol fermentation, one glucose molecule is converted into two ethanol molecules and two carbon dioxide molecules.[14][15] It is used to make bread dough rise: the carbon dioxide forms bubbles, expanding the dough into a foam.[16][17] The ethanol is the intoxicating agent in alcoholic beverages such as wine, beer and liquor.[18] Fermentation of feedstocks, including sugarcane, corn, and sugar beets, produces ethanol that is added to gasoline.[19] In some species of fish, including goldfish and carp, it provides energy when oxygen is scarce (along with lactic acid fermentation).[20]

The figure illustrates the process. Before fermentation, a glucose molecule breaks down into two pyruvate molecules (Glycolysis). The energy from this exothermic reaction is used to bind inorganic phosphates to ADP, which converts it to ATP, and convert NAD+ to NADH. The pyruvates break down into two acetaldehyde molecules and give off two carbon dioxide molecules as waste products. The acetaldehyde is reduced into ethanol using the energy and hydrogen from NADH, and the NADH is oxidized into NAD+ so that the cycle may repeat. The reaction is catalyzed by the enzymes pyruvate decarboxylase and alcohol dehydrogenase.[14]

Homolactic fermentation (producing only lactic acid) is the simplest type of fermentation. Pyruvate from glycolysis[21] undergoes a simple redox reaction, forming lactic acid.[22][23] Overall, one molecule of glucose (or any six-carbon sugar) is converted to two molecules of lactic acid:

It occurs in the muscles of animals when they need energy faster than the blood can supply oxygen. It also occurs in some kinds of bacteria (such as lactobacilli) and some fungi. It is the type of bacteria that convert lactose into lactic acid in yogurt, giving it its sour taste. These lactic acid bacteria can carry out either homolactic fermentation, where the end-product is mostly lactic acid, or heterolactic fermentation, where some lactate is further metabolized to ethanol and carbon dioxide[22] (via the phosphoketolase pathway), acetate, or other metabolic products, e.g.:

If lactose is fermented (as in yogurts and cheeses), it is first converted into glucose and galactose (both six-carbon sugars with the same atomic formula):

Hydrogen gas is produced in many types of fermentation as a way to regenerate NAD+ from NADH. Electrons are transferred to ferredoxin, which in turn is oxidized by hydrogenase, producing H2.[14] Hydrogen gas is a substrate for methanogens and sulfate reducers, which keep the concentration of hydrogen low and favor the production of such an energy-rich compound,[24] but hydrogen gas at a fairly high concentration can nevertheless be formed, as in flatus.[citation needed]

For example, Clostridium pasteurianum ferments glucose to butyrate, acetate, carbon dioxide, and hydrogen gas:[25] The reaction leading to acetate is: 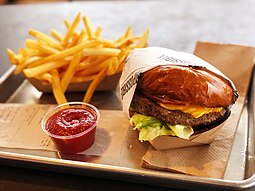 Fermentation is used to generate the heme protein found in the Impossible Burger.

Some companies have started providing fermentation services to farmers (Farming as a Service).[26][27]

Heme is a protein which gives meat its characteristic texture, flavour and aroma.[28] Impossible Foods used fermentation to generate a particular strand of heme derived from soybean roots, called soy leghemoglobin, which was integrated into the Impossible Burger to mimic meat flavor and appearance.[28]

Most industrial fermentation uses batch or fed-batch procedures, although continuous fermentation can be more economical if various challenges, particularly the difficulty of maintaining sterility, can be met.[29]

In a batch process, all the ingredients are combined and the reactions proceed without any further input. Batch fermentation has been used for millennia to make bread and alcoholic beverages, and it is still a common method, especially when the process is not well understood.[30]: 1  However, it can be expensive because the fermentor must be sterilized using high pressure steam between batches.[29] Strictly speaking, there is often addition of small quantities of chemicals to control the pH or suppress foaming.[30]: 25

Batch fermentation goes through a series of phases. There is a lag phase in which cells adjust to their environment; then a phase in which exponential growth occurs. Once many of the nutrients have been consumed, the growth slows and becomes non-exponential, but production of secondary metabolites (including commercially important antibiotics and enzymes) accelerates. This continues through a stationary phase after most of the nutrients have been consumed, and then the cells die.[30]: 25

The high cost of sterilizing the fermentor between batches can be avoided using various open fermentation approaches that are able to resist contamination. One is to use a naturally evolved mixed culture. This is particularly favored in wastewater treatment, since mixed populations can adapt to a wide variety of wastes. Thermophilic bacteria can produce lactic acid at temperatures of around 50 °Celsius, sufficient to discourage microbial contamination; and ethanol has been produced at a temperature of 70 °C. This is just below its boiling point (78 °C), making it easy to extract. Halophilic bacteria can produce bioplastics in hypersaline conditions. Solid-state fermentation adds a small amount of water to a solid substrate; it is widely used in the food industry to produce flavors, enzymes and organic acids.[29]

In continuous fermentation, substrates are added and final products removed continuously.[29] There are three varieties: chemostats, which hold nutrient levels constant; turbidostats, which keep cell mass constant; and plug flow reactors in which the culture medium flows steadily through a tube while the cells are recycled from the outlet to the inlet.[31] If the process works well, there is a steady flow of feed and effluent and the costs of repeatedly setting up a batch are avoided. Also, it can prolong the exponential growth phase and avoid byproducts that inhibit the reactions by continuously removing them. However, it is difficult to maintain a steady state and avoid contamination, and the design tends to be complex.[29] Typically the fermentor must run for over 500 hours to be more economical than batch processors.[31]

History of the use of fermentation[edit] 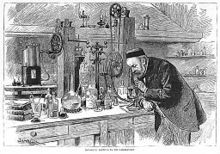 Louis Pasteur in his laboratory

In 1837, Charles Cagniard de la Tour, Theodor Schwann and Friedrich Traugott Kützing independently published papers concluding, as a result of microscopic investigations, that yeast is a living organism that reproduces by budding.[39][40]: 6  Schwann boiled grape juice to kill the yeast and found that no fermentation would occur until new yeast was added. However, a lot of chemists, including Antoine Lavoisier, continued to view fermentation as a simple chemical reaction and rejected the notion that living organisms could be involved. This was seen as a reversion to vitalism and was lampooned in an anonymous publication by Justus von Liebig and Friedrich Wöhler.[4]: 108–109

The turning point came when Louis Pasteur (1822–1895), during the 1850s and 1860s, repeated Schwann's experiments and showed fermentation is initiated by living organisms in a series of investigations.[23][40]: 6  In 1857, Pasteur showed lactic acid fermentation is caused by living organisms.[41] In 1860, he demonstrated how bacteria cause souring in milk, a process formerly thought to be merely a chemical change. His work in identifying the role of microorganisms in food spoilage led to the process of pasteurization.[42]

Although showing fermentation resulted from the action of living microorganisms was a breakthrough, it did not explain the basic nature of fermentation; nor, prove it is caused by microorganisms which appear to be always present. Many scientists, including Pasteur, had unsuccessfully attempted to extract the fermentation enzyme from yeast.[44]

Success came in 1897 when the German chemist Eduard Buechner ground up yeast, extracted a juice from them, then found to his amazement this "dead" liquid would ferment a sugar solution, forming carbon dioxide and alcohol much like living yeasts.[45]

Buechner's results are considered to mark the birth of biochemistry. The "unorganized ferments" behaved just like the organized ones. From that time on, the term enzyme came to be applied to all ferments. It was then understood fermentation is caused by enzymes produced by microorganisms.[46] In 1907, Buechner won the Nobel Prize in chemistry for his work.[47]

Advances in microbiology and fermentation technology have continued steadily up until the present. For example, in the 1930s, it was discovered microorganisms could be mutated with physical and chemical treatments to be higher-yielding, faster-growing, tolerant of less oxygen, and able to use a more concentrated medium.[48][49] Strain selection and hybridization developed as well, affecting most modern food fermentations.[citation needed]

The word "ferment" is derived from the Latin verb fervere, which means to boil. It is thought to have been first used in the late 14th century in alchemy, but only in a broad sense. It was not used in the modern scientific sense until around 1600.[citation needed]