From Wikipedia, the free encyclopedia
(Redirected from GHOST HOUND)
Jump to navigation Jump to search
Anime and manga series

Ghost Hound (神霊狩/GHOST HOUND, Shinreigari/Gōsuto Haundo) is an anime television series, created by Production I.G and Masamune Shirow, noted for being the creator of the Ghost in the Shell series.[2] The original concept and design was first developed by Shirow in 1987.[3] It is Production I.G's 20th anniversary project and was first announced at the 2007 Tokyo International Anime Fair.[2]

In the small town of Suiten, located in a remote mountain region on the island of Kyūshū, reality and the spirit realm collide. Ghosts and paranormal occurrences appear in the real world, spreading through the town. Three high school boys, Tarō, Makoto and Masayuki, who have all had traumatic experiences in their childhood, observe the strange occurrences happening at Suiten. Together, they investigate by entering the spirit realm, or the Unseen World, although no human is supposed to be able to do so. The three boys are granted entrance, only to realize the key to their childhood traumas lies within this Unseen World. The local Shinto priest and his daughter, Miyako, also become involved in the occurrences. 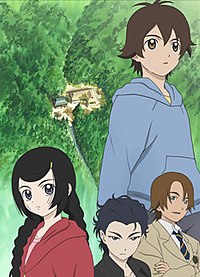 The four main characters of Ghost Hound, from Left to Right: Miyako, Makoto, Masayuki, and above them all, Taro

Sentai Filmworks currently licenses the anime in North America and is localized & distributed by Section23 Films. The first half of the season was released on October 20, 2009. The second half was released on December 15, 2009.[6] Sentai Filmworks re-released Ghost Hound with an English dub on DVD and Blu-ray on September 14, 2010.[7]

The manga series Shinreigari: Another Side was written by Masamune Shirow with art by Kanata Asahi. The manga has two volumes and was published from Mar 30, 2007 in the monthly magazine Comic Blade.[4]