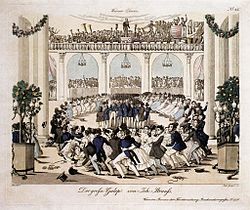 Copper engraving of the "Great Galop" of Johann Strauss (1839).

In dance, the galop, named after the fastest running gait of a horse (see gallop), a shortened version of the original term galoppade, is a lively country dance, introduced in the late 1820s to Parisian society by the Duchesse de Berry and popular in Vienna, Berlin and London. In the same closed position familiar in the waltz,[citation needed] the step combined a glissade with a chassé on alternate feet, ordinarily in a fast 2
4 time.

The galop was a forerunner of the polka, which was introduced in Prague ballrooms in the 1830s and made fashionable in Paris when Raab, a dancing teacher of Prague, danced the polka at the Odéon Theatre in 1840. In Australian bush dance, the dance is often called galopede. An even livelier, faster version of the galop called the can-can developed in Paris around 1830.[citation needed]

The galop was particularly popular as the final dance of the evening. The "Post Horn Galop", written by the cornet virtuoso Herman Koenig, was first performed in London in 1844; it remains a signal that the dancing at a hunt ball or wedding reception is ending.[citation needed]