From Wikipedia, the free encyclopedia
Jump to navigation Jump to search
Claims of geographical bias on Wikipedia 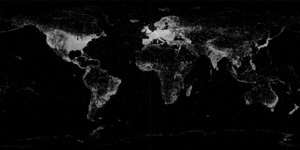 The geographical bias on Wikipedia is an inequality in the distribution of its content with respect to the geographical association of article subjects. It is an element of criticism of Wikipedia, in addition to other biases, such as gender bias, racial bias, or ideological. The research shows that despite considerable differences of this distribution depending on the language of Wikipedia, there is a common trend towards more content related to the United States and Western Europe coupled with the scarcity of information about certain regions in the rest of the world.[1]

Several studies on internet geography and Wikipedia were published by the members of the Oxford Internet Institute (OII).

A 2009 article by Mark Graham of OII in The Guardian presented a color-coded map of the world that illustrated the disparity between the numbers of geotagged Wikipedia articles (in all languages) for countries from the Global North and from the Global South. Graham wrote:

A 2010 analysis of Wikipedia people edits revealed that Asia, as the most populous continent, was represented in only 16.67% of edits. Africa (6.35%) and South America (2.58%) were equally underrepresented.[3] A 2011 study by OII found that 84 percent of articles tagged with a location were in Europe or North America, and that Antartica had more entries than any African or South American nation.[4] According to Adama Sanneh, the founder of the WikiAfrica Education initiative, as of 2021 there are more articles on the English Wikipedia about Paris than Africa.[5]

In 2011 a breakdown by languages (Arabic, Egyptian Arabic, English, French, Hebrew, Persian, Swahili) was reported by OII. Graham reported some unexpected patterns in distributions. For example, Swahili Wikipedia has unusually many articles geotagged in Turkey. Graham explains this and similar artifacts by dedicated editors creating numerous stub articles in the areas of their interest.[6]

A 2015 OII paper reported on a highly uneven geography of participation in editing Wikipedia.[7] In particular, it found that contributors from low-income countries contribute to geographical imbalance by writing more about high-income countries than about their own ones.[8]

A 2016 study by David Laniado and Marc Miquel Ribé empirically confirmed that cultural identity is a significant unconscious motivator for Wikipedia editors affecting their works in areas which may be associated with their identity, in particular, in Wikipedia categories "Culture" and "Geography".[9] A similar conclusion was drawn in 2010 by Hecht and Gergle: Wikipedians tend to work on topics related to the nearby locations.[10] Laniado and Ribé suggest that in order to overcome the imbalance stemming from cultural identities, Wikipedia has to promote editors from different language Wikipedias to propagate their cultural identities into other Wikipedias. To this end the translator and article recommendation tools developed by the Wikimedia Foundation may be of use by providing options to select preferential content based on the keywords related to cultural identity.[9]