From Wikipedia, the free encyclopedia
Jump to navigation Jump to search
Delivery in cricket
For other uses, see Googly (disambiguation).

In the game of cricket, a googly refers to a type of delivery bowled by a right-arm leg spin bowler. It is different from the normal delivery for a leg-spin bowler in that it is actually turning the other way. The googly is NOT a variation of the typical off spin type of delivery, in that the cricket ball is presented from the bowler's hand in such a way that once the ball pitches, it deviates in the opposite direction of a leg spinning type of delivery (i.e. towards the leg stump rather than the off stump). It has also been colloquially and affectionately referred to as the wrong'un, Bosie or Bosey, with those latter two eponyms referring to Bernard Bosanquet, the bowler who originally devised and began using the googly. 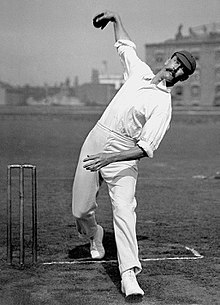 Reggie Schwarz, known for using the googly as his stock delivery

While a normal leg break spins from the leg to the off side, away from a right-handed batsman, a googly spins the other side, from off to leg, into a right-handed batsman (and is distinct from an off break delivery). The bowler achieves this change of spin by bending the wrist sharply from the normal leg break delivery position. When the ball rolls out of the hand (from the side near the little finger, as in a normal leg break), it emerges with clockwise spin (from the bowler's point of view). A googly may also be achieved by bowling the ball as a conventional leg break, but spinning the ball further with the fingers just before it is released.[1]

The change of wrist action can be seen by a skilled batsman and the change of spin allowed for when playing a shot at the ball.[1] Less skilled batsmen, or ones who have lost their concentration, can be deceived completely, expecting the ball to move one direction off the pitch, only for it to move the other direction. If the batsman is expecting a leg break, he will play outside the line of the ball after it spins. This means the ball can either strike the pads for a potential leg before wicket (lbw) appeal, or may fly between the bat and the pads and hit the wicket, or catch the edge of the bat.

The googly is a major weapon in the arsenal of a leg spin bowler, and can be one of the bowler's most effective most important wicket-taking balls. It is used infrequently, because its effectiveness comes mostly from its surprise value.

Left-arm unorthodox spinners can bowl with the googly action using the left arm. This delivery turns away from a right-handed batsman, like a leg break or left-arm orthodox spinner. The googly is similar in principle to the doosra, the ball from an off-spinner that turns the opposite way from his stock ball.[2]

Chambers Dictionary describes the whole of etymology of the word as "dubious".[3]

To grip the ball for a leg-spinning delivery, the ball is placed into the palm with the seam parallel to the palm. The first two fingers then spread and grip the ball, and the third and fourth fingers close together and rest against the side of the ball. The first bend of the third finger should grasp the seam. The thumb resting against the side is up to the bowler, but should impart no pressure. When the ball is bowled, the third finger will apply most of the spin. The wrist is cocked as it comes down by the hip, and the wrist moves sharply from right to left as the ball is released, adding more spin. The ball is tossed up to provide flight. The batsman will see the back of the hand when the ball is released.[1]

In a scene from John Boorman's 1987 film Hope and Glory, David Hayman plays a father who, before leaving to fight in WWII, passes on "the secret of the googly" to his young son.[4]