From Wikipedia, the free encyclopedia
Jump to navigation Jump to search
Interpolation method in computer graphics 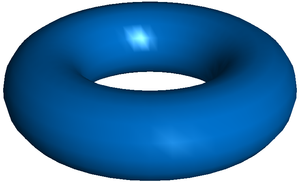 Gouraud shading, named after Henri Gouraud, is an interpolation method used in computer graphics to produce continuous shading of surfaces represented by polygon meshes. In practice, Gouraud shading is most often used to achieve continuous lighting on triangle meshes by computing the lighting at the corners of each triangle and linearly interpolating the resulting colours for each pixel covered by the triangle. Gouraud first published the technique in 1971.[1][2][3]

Gouraud shading works as follows: An estimate to the surface normal of each vertex in a polygonal 3D model is either specified for each vertex or found by averaging the surface normals of the polygons that meet at each vertex. Using these estimates, lighting computations based on a reflection model, e.g. the Phong reflection model, are then performed to produce colour intensities at the vertices. For each screen pixel that is covered by the polygonal mesh, colour intensities can then be interpolated from the colour values calculated at the vertices.

Comparison with other shading techniques[edit]

Gouraud shading is considered superior to flat shading and requires significantly less processing than Phong shading, but usually results in a faceted look.

In comparison to Phong shading, Gouraud shading's strength and weakness lies in its interpolation. If a mesh covers more pixels in screen space than it has vertices, interpolating colour values from samples of expensive lighting calculations at vertices is less processor intensive than performing the lighting calculation for each pixel as in Phong shading. However, highly localized lighting effects (such as specular highlights, e.g. the glint of reflected light on the surface of an apple) will not be rendered correctly, and if a highlight lies in the middle of a polygon, but does not spread to the polygon's vertex, it will not be apparent in a Gouraud rendering; conversely, if a highlight occurs at the vertex of a polygon, it will be rendered correctly at this vertex (as this is where the lighting model is applied), but will be spread unnaturally across all neighboring polygons via the interpolation method.

The problem is easily spotted in a rendering which ought to have a specular highlight moving smoothly across the surface of a model as it rotates. Gouraud shading will instead produce a highlight continuously fading in and out across neighboring portions of the model, peaking in intensity when the intended specular highlight passes over a vertex of the model. While this problem can be fixed by increasing the density of vertices in the object, at some point the diminishing returns of this approach will favour switching to a more detailed shading model.

Gouraud's original paper described linear color interpolation.[1] In 1992, Blinn published an efficient algorithm for hyperbolic interpolation[4] that is used in GPUs as a perspective correct alternative to linear interpolation. Both the linear and hyperbolic variants of interpolation of colors from vertices to pixels is commonly called "Gouraud shading".