In December 2020, GMP was placed into special measures by Her Majesty's Inspectorate of Constabulary and Fire & Rescue Services (HMICFRS), this was following the watchdog's report found that GMP did not record one in five crimes between July 2019 and June 2020. They estimated the force failed to log around 80,100 crimes, a high proportion of which were violent offences. Following the announcement, Chief Constable Ian Hopkins, resigned from his post.[5]

GMP officers on patrol in Piccadilly Gardens, Manchester after the 2008 UEFA Cup Final

In 1991, David Wilmot succeeded Anderton. In 2002, Michael J. Todd was appointed to chief constable until his death in 2008.

There was much press coverage of Todd's death in March 2008.[8] Todd was seen as a man of action and got more "bobbies on the beat", with himself often doing so.[9] GMP's assistant chief constable became the acting chief constable until the appointment of Peter Fahy, previously head of Cheshire Police, as chief constable in September 2008.[10]

Police constable Ian Rodgers was the first GMP officer to be killed in the line of duty in 1975. His death occurred in a railway incident at Stockport. Since the formation of GMP, 20 officers have been killed or died in the line of duty.[11] GMP then assisted with the reconstruction of Manchester following the 1996 Manchester bombing.

In the 1990s, Manchester had gained the deriding tag of 'Gunchester', in reference to the city's high gun crime rate at the time.[12] Greater Manchester Police faced the problem of gun crime in Manchester, particularly in the deprived districts in south Manchester. Key gang leaders were jailed for life in 2009.[13] By 2011, the city had shaken off the tag.[14]

On 14 October 2010, Greater Manchester Police posted details of all calls made to them in a 24-hour period on Twitter.[15][16] The service posted details of every incident reported to its officers in 24 hours to demonstrate how much of their time is spent on what the chief constable called "social work" instead of fighting crime.[17] They repeated this exercise on 14 October 2014.[18]

GMP have used social media as a helpful force rather than a hindrance. In the 2011 England riots, with criticism of the role social media such as Twitter and Facebook had in instigating the riots,[19] GMP stated that support on social media had resulted in many responses from members of the public in trying to catch suspects.[20] GMP then naming and shamed any convicted individuals over the riots.[21]

Officers killed in the line of duty[edit]

See also: List of British police officers killed in the line of duty

The following officers of Greater Manchester Police are listed by the Police Roll of Honour Trust as having died during the course of their duties:[23]

The area GMP polices is split into geographical divisions, with each Metropolitan borough of Greater Manchester being assigned one. In 2021, GMP grouped some divisions together to form command areas, the divisions that remain on their own are also still referred to as a command area. Each command area is ran by a chief superintendent, with each 'division' or 'cluster' being led by a superintendent.

Manchester Airport (I) Division falls within the Specialist Operations branch. 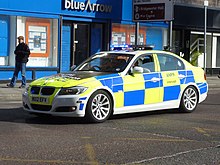 GMP also operates a Road Policing Unit (RPU) responsible for all traffic policing in the county, which includes over 280 miles (450 km) of motorway. In 2009, the RPU's were divided into three strategic units, based at RPU 1 Leigh, RPU 2 Hyde & RPU 3 Chadderton. Due to the constraints on budgets and the latest review, the Road Policing Unit will lose a further 78 officers and in 2012 restructured/reduced to two RPU's based at Eccles and Chadderton. This has reduce the strength of the RPU to only 100 officers over a 5 shift system providing only 20 officers per shift to cover the police area. 2014 has seen this further reduced to 10-12 officers working the force area per shift as further cuts reduce officer numbers.

During the 1990s, the GMP's area had a high rate of car crime. To combat this the Tactical Vehicle Crime Unit was formed which in 2010 was replaced by Vortex which was based at Stretford Police Station.

In June 2011, The Tactical Vehicle Crime Unit was re formed under the slightly different name, Tactical Vehicle Intercept Unit. The unit continued to utilise a selection of high performance unmarked vehicles and officers worked alongside the ANPR Intercept Unit to combat serious and organised criminals using the road network.

In 2016, the unit merged with firearms, dogs and the Tactical Aid Unit to form the Specialist Operations Branch.

The Roads Policing Unit (RPU) and TVIU often work hand in hand in implementing certain tactics such as Tactical Pursuit and Containment for which the TVIU & RPU are the only departments trained in this field. 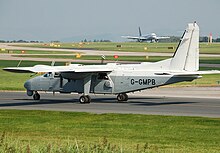 Aviation support has been provided to the GMP by the National Police Air Service (NPAS) since 2012. NPAS operates a EurocopterEC135 T2+ helicopter call sign NPAS 21 from City Airport Manchester,[29] which provides support to all neighbouring police forces.

Prior to the establishment of NPAS in 2012, the Air Support Unit had amalgamated with Cheshire Constabulary, North Wales Police and Lancashire Constabulary to form the North West Air Operations Group (NWAOG) in July 2011, operating four helicopters. The group was established to save money and provide flexibility with the closest helicopter able to be deployed to an incident and if there were two incidents in the same force area then two helicopters could be sent if necessary.[32][33]

The Air Support Unit had also operated a fixed wing aircraft. In January 2002, GMP ordered a Britten-Norman Defender 4000 fixed wing aircraft for the Commonwealth Games in July.[34] In July, GMP began operating the Defender call sign India 66 for the Games which flew on average seven hours a day.[35][36] The Defender flew around 1,200 hours each year including targeting terrorists and major criminals.[37] The Defender was decommissioned in December 2013.[37] In the United Kingdom, two other police services have also operated the Defender 4000 – the Police Service of Northern Ireland and Hampshire Constabulary.

GMP also trialled a tethered blimp in 2010 to provide surveillance for major events and high crime locations. The blimp was only used on 18 occasions and was sold due to operational problems.[38][39]

GMP operates a Tactical Aid Unit which is used in crowd control instances. The service has policed notable riots such as the 2001 Oldham race riots, the 2008 UEFA Cup Final riots and the 2011 England riots which affected Salford and Manchester city centre in 2011.

The SCD is a unit of GMP responsible for dealing with serious crimes and providing protection for vulnerable people.[40]

The GMP Counter Terrorism Unit was formed in April 2007 to prevent the spread of terrorism.[41] The city has experienced incidents with the intention to spread terror, such as the 1996 Manchester Bombing and the Manchester Arena bombing. Most recently, the unit helped thwart the 2009 plot to launch terror attacks on the Trafford Centre, Arndale Centre and nearby St Ann's Square.[42] 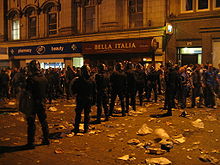 Officers of the GMP, as in the rest of Great Britain, do not routinely carry firearms. Instead, the GMP maintains a firearms unit to provide them with a capability to deal with armed criminals. The Greater Manchester Police, Tactical Firearms Unit maintains Armed Response Vehicles, which transport armed officers to the scene.

In 2003, GMP had over 110 dogs. However, this has recently[when?] been reduced to only 35 dogs across the force,[citation needed] leaving many areas without a single dog available. The dogs are involved in important operational duties such as tracking, building searches, and other criminal work across Greater Manchester. 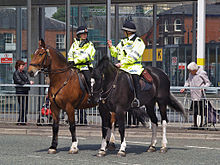 The GMP maintains a mounted policing capability. The mounted officers are employed to target crime hotspots and are also seen at many events including demonstrations and the region's football matches. Horses are also used to search inaccessible areas for missing or wanted people. The unit is made up of a team of specialist police officers, skilled grooms and trainers, and 35 horses. The mounted unit is based at Hough End, in Chorlton, and uses horseboxes to transport the horses for duties around Greater Manchester.

GMP has over 350 special constables, who are assigned to each of the twelve divisions. Special constables work alongside their regular counterparts and are mainly assigned to divisions and work within local policing teams (LPTs), however some divisions still allow officers to work within response teams when LPT's are not on duty. Between 2009 and 2012, a small number of special constables were integrated into the Special Operations Department (X – Depart) working within the Road Policing Units (RPU's), undertaking a full and complete duties within the traffic department.

In addition there are a number of special constables engaged, with support of their employers in the Employee Supported Policing scheme.[43] This is where the officers employer supports the officers duties, usually with paid time, 8 hours per month are commonly covered to undertake their special constabulary duties at their normal place of work.

Special constables are normally co-ordinated by the chief officer of the special constabulary, currently Michael Walmsley, and divisional commanders. Under the guidance of the chief constable, it was envisaged that the number of special constables within GMP would increase to 1,000 officers, within a three-year period from 2009, to date this target has not been achieved.

This unit conducts overt surveillance of certain released prisoners and upload some footage onto YouTube of people that they believe have reoffended.[44][45]

Greater Manchester Police is a partner in the following collaborations:

The rank structure that the Greater Manchester Police use is the same as all other British territorial police forces, excluding London.

The Greater Manchester Police also have a special constabulary with five ranks.

These are the numbers of police officers for each rank:

Greater Manchester Police produce its own newspaper, Brief, which is distributed to thousands of officers, making it one of the largest in circulation. Each 20-page issue has a mix of news about police initiatives, policies and crime successes, in-depth articles on specialist units, social and sports news, and regular features.

In June 2017, less than a month after the Manchester Arena bombing, the Chief Constable of GMP, Ian Hopkins, said the force was under strain due to funding cuts. Mayor of Greater Manchester, Andy Burnham, intended to write to the Prime Minister claiming that the GMP was up to its limits "and probably beyond them". In March 2010 there was a total workforce of 13,189 staff, but projections suggested there would be only 10,108 by 2020. Her Majesty's Inspectorate of Constabulary (HMIC) maintained that the number of police officers would reduce by 1,800 over the next ten years. Burnham feared that pressure on the GMP was increasing due to terrorism and also because of a rise in violent crime in the region. Burnham told The Guardian, "There’s no question about it: GMP needs more officers. They are at their limits, probably beyond them, in terms of what they are dealing with. The chief constable has described it as the low end of reasonable. Therefore, that’s borderline unreasonable."[50]

In 2003, video evidence emerged documenting racist acts by police trainees and officers, including one member applauding Hitler and another donning a Ku Klux Klan outfit. Flagrant use of racist language to deride other police trainees was also reported.[60]