From Wikipedia, the free encyclopedia
Jump to navigation Jump to search
Wikimedia help page
This page is about the technical problem where multiple editors try to edit the same page at once, leading to a conflict the software cannot resolve automatically. It is not to be confused with edit warring.

This page discusses edit conflicts, and how to deal with them. To understand what an edit conflict is, consider the following situation:

Layout of the edit-conflict page

Note: The following explanation may not be consistent with the editing interface that you see, depending on your account's preferences and gadgets, which web browser you use, and whether you use Wikipedia's traditional editor, visual editor, or a mobile app to edit. 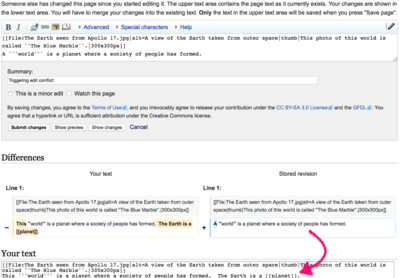 Your changes have been copied into a box at the very end of the page. The box with your changes is labeled "Your text". On a large page with many changes, you may have to scroll down a very long way to find the box that contains your changes.

At the top of the edit-conflict page is an editing box containing Bob's version of the whole page, even if Alice is doing section editing.

At the bottom of the edit-conflict page is a second editing box containing the text Alice was going to submit. This will be Alice's version of the page or section she was editing.

Between the two editing boxes is a diff that shows the difference between Bob's and Alice's version of the article. For the section Alice is editing, it shows Alice's changes and Bob's possible changes, except for sections where Alice and Bob have both made the same change. For the other sections, it shows the full new text as if all that text was added.

Alice can edit in the upper editing box and press Publish changes. In the case Alice was editing only a section, this will be interpreted as the new version of the section, hence produce duplication of the other sections, unless Alice deletes them before saving. (This seems to be a bug.) The best solution in this case is to save your new text outside of Wikipedia (e.g., to the clipboard), cancel out, then try again.

At certain times when pressing Publish changes and the system is slow, one may be able to make multiple edits to the same page before the system responds. This produces an edit conflict with oneself. In this case the upper text may be the old version instead of the one involving the first edit, i.e., the system notices the earlier change but has not processed it yet. A moment later, while one is viewing the edit-conflict page, the first change is carried out in the background, and the upper text no longer is the current one. Hence, the diff shows the combined edit, and in the case of section editing, like before, the "addition" of the other sections. If you choose to publish your work in this type of edit conflict, it will result in the removal of your previous editing from the page.

In most situations, an edit conflict can be resolved by merging the two changes to a page — including the contributions of both editors.

If Alice made only small changes, and Bob made large changes, she may choose to work from Bob's version, and re-merge her changes in. Alice might choose to add some text like "via edit conflict" to the edit summary, or use template {{edit conflict}} on a Discussion/Talk page, to warn Bob and others that she had to do this – Bob can then peer review her merging for accuracy.

If Alice made large changes, and Bob made small changes, Alice may choose to work from her version. One option is for Alice to copy the bottom text into the top text (or just copy over the one section of the top text, if Alice was section editing), with an appropriate edit summary (e.g., "via edit conflict, will remerge"). Then Alice can view the page history, determine Bob's changes, and re-apply them to her version, in a separate edit.

Alice should not just post her changes over the top of Bob's. We assume good faith – mistakes are occasionally made, and newcomers may not understand the edit conflict window. However, Alice must not routinely ignore edit conflicts. It is absolutely not acceptable for Alice to overwrite Bob out of laziness. We encourage contributors to double-check their merges by using the diff feature.

(This is a conflict between editors that is undetectable by the mechanism that decides whether to give the "edit conflict" message.)

Some people edit by copying the source text into a text editor, making lots of changes (reorganising, adding new content, etc.), and then, when they're done, pasting the whole thing back onto Wikipedia as a single (new) edit. If someone else has made changes in the meantime these changes would get lost in the paste back. People who edit in this manner should either:

The second method is not foolproof, since another editor may save changes in the time interval between the retrieval of the page history and the final pasting back. This can be detected by checking the page history again afterwards.

If third-party software that assists a user to edit a page in an external editor does not follow the first bullet point above (or the equivalent measure, if any, for the method it is using to access Wikipedia) and causes a logical edit conflict, then that is a software bug which should be reported to the software developers of the third-party software being used.

Sometimes mistakes will be made in the merging process, because Alice is human, and this may cause some of Bob's changes to be accidentally reversed. Logical edit conflicts aren't always immediately visible. Sometimes Alice may have good reasons for thinking that Bob's improvements aren't useful. In this case, Bob and Alice are expected to resolve their differences amicably.

If Bob made a small change which Alice accidentally replaced, Bob must not revert to his version. It is absolutely not acceptable for Bob to reverse Alice's major improvements to the page out of a desire to protect his minor improvements, or to punish Alice for her carelessness. This is particularly important if the page has subsequently been edited by other editors.

The best approach for Bob in this circumstance is to edit Alice's version, reinstate his minor improvements, and leave Alice's major improvements intact. He may also add something to the edit summary to indicate that he had to do this – for example: "Reinstating link which Alice accidentally removed". Alice should then apologize to Bob for her mistake, and thank him for preserving her improvements.

If Alice repeats her error, then the best approach is for Bob to have a friendly word on her talk page, point her to this page, and ask her if she could take a little more care in the future. This is particularly important for newcomers, who may not understand the correct way to resolve edit conflicts, though even experienced users may need the occasional friendly reminder.

When saving a previous version (i.e., when reverting) or a new version based on that (a modified reversion) the edit conflict warning and prevention system is not triggered and a possible new edit made in the meantime is unintentionally reverted also, see Reverting a page to an earlier version. To avoid this problem one can copy the text from the edit box of the old version into the edit box of the latest version. In some sense, this can cause hidden edit conflicts: you may overwrite someone else's changes without realising that you are doing so. It's always wise to check the diff after performing a revert, just as you would after posting via edit conflict. Preferably, one can simply try to avoid reversion wars.

Did someone tell you that section editing prevents edit conflicts? That was true in very old versions of MediaWiki software, but it hasn't been the case since about 2006.

Edit conflicts are irritating and can be time-consuming, but there are ways to make them less frequent or easier to recover from.

Saving your work frequently reduces the risk of your experiencing an edit conflict, and when you do they should be easier to resolve.

When practical, edit one area of the article at a time. This reduces edit conflicts because the system can cope if different editors are editing different areas at the same time. Both the source code editor and the visual editor use CVS-style edit-conflict merging, based on the diff3 utility. This feature triggers an edit conflict only if users attempt to edit the same few lines. Edit conflict detection is by line/paragraph.

Start new articles in sandboxes and move them to mainspace only when you are ready to stop editing them for an hour or so and instead watch what others do to them.

Wikipedia has an "In Use" notice in its Template namespace that people may use when editing a page over a long period of time. This may discourage other editors from editing while you are editing. Simply put {{inuse}} on an article before proceeding with a major edit, and remove the template when the editing is complete.