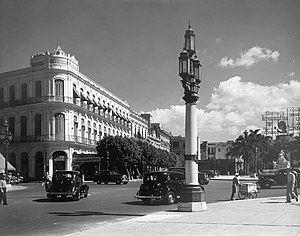 The Hotel Saratoga is located in front of the Parque de la Fraternidad near the Capitolio Building in Havana, Cuba. The building was commissioned by wealthy Spanish merchant Gregorio Palacio y Pérez, who was born in Santander, Spain. He owned various rooming facilities and signed a contract in 1879 for $98,000 for the construction of the new building. Originally, it was a three-story building. The ground floor housed a tobacco warehouse, a shop, and four apartments. The second floor was used as a hotel/guest house with 43 rooms and a dining room.[8]

Its first location was on Calle Monte. Later it was moved to the surroundings of the Campo de Marte (now the Parque de la Fraternidad) and called the Alcázar.

The central location and the views made it a preferred destination for international visitors.[5] In 1935, tourist guides highlighted the hotel as one of the best in Havana. Its terrace, called Aires Libres, was an important cultural and traditional center in the 20th century.[5][9] 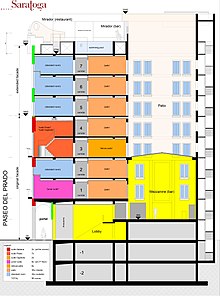 Like most businesses in Cuba in the 1960s the Hotel Saratoga was confiscated by the revolutionary government.[5][a][11] Until then, the building had maintained its vitality. After the takeover by the revolutionary government, it became a tenement building with multiple subdivisions until it was vacated due to its poor condition.[5][b] In 1996, the property was transferred to Hotel Saratoga S.A., a Cuban joint-venture company owned jointly by Habaguanex S.A., the commercial arm of the City Historian's Office, and an international consortium of investors.[citation needed] The original building was gutted, and only the street façades on Paseo del Prado and Dragones remained. A new building was constructed behind the original façades, including a two-level basement, a mezzanine level, and additional floors. It was reopened in 2005 as a five-star hotel with 96 rooms, three bars, two restaurants, a roof-top swimming pool, and a business center. Its architecture recalled the colonial era and had an eclectic character with a large number of elements of interest such as French carpentry, ceramics, and Cuban marble.[5] The two original facades were destroyed by the explosion.