From Wikipedia, the free encyclopedia
Jump to navigation Jump to search
Free and open source project building an anonymous network

The Invisible Internet Project (I2P) is an anonymous network layer (implemented as a mix network) that allows for censorship-resistant, peer-to-peer communication. Anonymous connections are achieved by encrypting the user's traffic (by using end-to-end encryption), and sending it through a volunteer-run network of roughly 55,000 computers distributed around the world. Given the high number of possible paths the traffic can transit, a third party watching a full connection is unlikely. The software that implements this layer is called an "I2P router", and a computer running I2P is called an "I2P node". I2P is free and open sourced, and is published under multiple licenses.[4]

I2P is beta software since 2003, when it started as a fork of Freenet.[5][6] The software's developers emphasize that bugs are likey to occur in the beta version and that peer review has been insufficient to date.[7] However, they believe the code is now reasonably stable and well-developed, and more exposure can help the development of I2P.

The network is strictly message-based, like IP, but a library is available to allow reliable streaming communication on top of it (similar to TCP, although from version 0.6, a new UDP-based SSU transport is used). All communication is end-to-end encrypted (in total, four layers of encryption are used when sending a message) through garlic routing,[8] and even the end points ("destinations") are cryptographic identifiers (essentially a pair of public keys), so that neither senders nor recipients of messages need to reveal their IP address to the other side or to third-party observers.

Although many developers had been a part of the Invisible IRC Project (IIP)[9] and Freenet communities, significant differences exist between their designs and concepts. IIP was an anonymous centralized IRC server. Freenet is a censorship-resistant distributed data store. I2P is an anonymous peer-to-peer distributed communication layer designed to run any traditional internet service (e.g. Usenet, email, IRC, file sharing, Web hosting and HTTP, or Telnet), as well as more traditional distributed applications (e.g. a distributed data store, a web proxy network using Squid, or DNS).

Many developers of I2P are known only under pseudonyms. While the previous main developer, jrandom, is currently on hiatus,[10] others, such as zzz, killyourtv, and Complication have continued to lead development efforts, and are assisted by numerous contributors.[1]

I2P has had a stable release every six to eight weeks. Updates are distributed via I2P torrents and are signed by the release manager (generally zzz or str4d).

Since I2P is an anonymous network layer, it is designed so other software can use it for anonymous communication. As such, there are a variety of tools currently available for I2P or in development.

The I2P router is controlled through the router console, which is a web frontend accessed through a web browser.

A screenshot of the inbox of I2P-Bote.

The Privacy Solutions project,[70] a new organization that develops and maintains I2P software, launched several new development efforts designed to enhance the privacy, security, and anonymity for users, based on I2P protocols and technology.

The code repository and download sections for the i2pd and Abscond project is available for the public to review and download.[73] Effective January, 2015 i2pd is operating under PurpleI2P.[74] 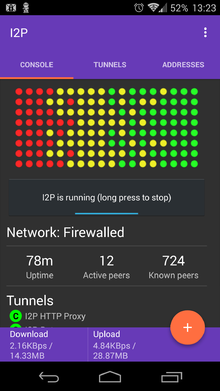 Some cryptocurrencies that support I2P are listed below. 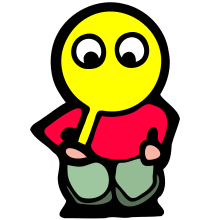 I2P's mascot, itoopie, who is looking through a magnifying glass.[78]

Eepsite
Eepsites are websites that are hosted anonymously within the I2P network. Eepsite names end in .i2p, such as ugha.i2p or forum.i2p. EepProxy can locate these sites through the cryptographic identifier keys stored in the hosts.txt file found within the I2P program directory. Typically, I2P is required to access these eepsites.[79]
.i2p
'I2p' is a pseudo-top-level domain which is only valid within the I2P overlay network scope. .i2p names are resolved by browsers by submitting requests to EepProxy which will resolve names to an I2P peer key and will handle data transfers over the I2P network while remaining transparent to the browser.[80]
EepProxy
The EepProxy program handles all communication between the browser and any eepsite. It functions as a proxy server that can be used by any web browser.
Peers, I2P nodes
Other machines using I2P that are connected to user's machine within the network. Each machine within the network shares the routing and forwarding of encrypted packets.
Tunnels
Every ten minutes, a connection is established between the user's machine and another peer. Data to and from the user, along with the data for other peers (routed through the user's machine), pass through these tunnels and are forwarded to their final destination (may include more jumps).[81]
netDb
The distributed hash table (DHT) database based on the Kademlia algorithm that holds information on I2P nodes and I2P eepsites. This database is split up among routers known as "floodfill routers". When a user wants to know how to contact an eepsite, or where more peers are, they query the database.[82][79]

Denial of service attacks are possible against websites hosted on the network, though a site operator may secure their site against certain versions of this type of attack to some extent.[83][84]

A zero-day vulnerability was discovered for I2P in 2014, and was exploited to de-anonymize at least 30,000 users. This included users of the operating system Tails.[85] This vulnerability was later patched.[86][87]

A 2017 study examining how forensic investigators might exploit vulnerabilities in I2P software to gather useful evidence indicated that a seized machine which had been running I2P router software may hold unencrypted local data that could be useful to law enforcement. Records of which eepsites a user of a later-seized machine was interested in may also be inferred. The study identified a "trusted" I2P domain registrar ("NO.i2p") which appeared to have been abandoned by its administrator, and which the study identified as a potential target for law enforcement takeover. It alternatively suggested waiting for NO.i2p's server to fail, only to social engineer the I2P community into moving to a phony replacement. Another suggestion the study proposed was to register a mirror version of a target website under an identical domain.[84] 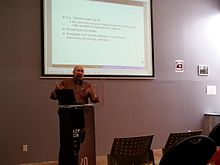 From August 15, 2015 to August 16, 2015 the first I2P convention was held in Toronto, Ontario.[88] The conference was hosted by a local hackerspace, Hacklab. The conference featured presentations from I2P developers and security researchers.

August 15, 2015 mainly had presentations on the past growth of the I2P network, a talk on what happens when companies sell people's personal information, and a round-table discussion on general privacy and security topics. The day ended with a CryptoParty, which helped to introduce new users to installing I2P, sending secure emails with I2P-Bote, and using I2P along with Vuze.

August 16, 2015 had more technical discussions than the previous day. The talks focused on how to dissuade bad-actors from using the network, how I2P has worked computer connection limits, how to do application development using I2P, and the development of the Android version. This day ended with a development meeting.