From Wikipedia, the free encyclopedia
Jump to navigation Jump to search
City in East Java, Indonesia

Kediri (Javanese: ꦏꦸꦛꦑꦼꦝꦶꦫꦶ Kuṭa Kediri) is an Indonesian city, located near the Brantas River in the province of East Java on the island of Java. It covers an area of 63.40 km2 and had a population of 268,950 at the 2010 Census[2] and 286,796 at the 2020 Census.[3] It is one of two 'Daerah Tingkat II' that have the name 'Kediri' (the other is the Regency of Kediri, which surrounds the city). The city is administratively separated from the Regency, of which it was formerly the capital.

Archaeological artefacts discovered in 2007 appeared to indicate that the region around Kediri may have been the location of the Kediri Kingdom, a Hindu kingdom in the 11th century.[4]

The city is a major trade centre for the Indonesian sugar and cigarette industry.[5] Kediri is the second largest city by economy in East Java, after Surabaya, with a 2016 estimated GDP at Rp76.95 trillion.[6]

Traditionally, the city of Kediri is said to have been founded on 27 July 879,[7] and today the city's anniversary is celebrated on that date.[8] The Brantas River valley was known as the site of classical Javanese culture, particularly between the 10th and 15th centuries. The town of Kediri was established by King Airlangga on the banks of the upper Brantas river in 1042. It was originally called Dahanapura or Daha. After the death of Airlangga his kingdom was divided into two parts: the kingdom of Panjalu in the west, and the kingdom of Janggala in the east. Daha became the capital of Panjalu, and later the capital of the Kediri kingdom.[9]: 146–147, 158  Over the centuries, control of the city passed to the Singhasari, Majapahit, Demak and Mataram kingdoms.

The name "Kediri", or "Kadiri", is derived from the Sanskrit word Khadri, meaning Indian Mulberry, indicative of the mulberry trees (locally known as pacé or mengkudu) which grew in the area. 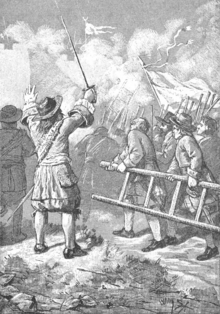 VOC troops storming Kediri – then the capital of Trunajaya – in 1678 during the Trunajaya War. Depicted in an 1890 Dutch children's novel.

After the era of the Javanese kingdoms, Kediri went into decline, becoming a small rural settlement, which was later annexed by the Dutch East India Company (VOC) as part of the Dutch conquest of Java. East Java in the 1740s was controlled by Cakraningrat IV, a Madurese regent who was favorably disposed toward the VOC, as he believed the Dutch would help him in securing the independence of Madura from the Kasunanan Kartasura kingdom. However, when his plans were rejected by the VOC, Cakraningrat rise against the Europeans. The rebellion was ultimately suppressed by the VOC, assisted by two generals sent by Pakubuwana II, Sunan Kartasura. Kediri then became part of the VOC and remained under Dutch control until the independence of Indonesia in 1945.[10]

Kediri began to flourish when the Dutch East Indies founded the autonomous Gemeente Kediri in 1906. Zelfstanding Gemeenteschap (self-government with full autonomy) was granted in 1928.

During the Indonesian National Revolution in 1945–1949, Kediri became a target of General Sudirman's guerrilla campaign. In 1965, after the failed 30 September Movement coup, Kediri suffered terrible bloodshed in which thousands of people were killed.[citation needed]

The Gudang Garam kretek tobacco industry was established in 1958 by Chinese Indonesian Tjoa Ing Hwie. He purchased vast lands in Kediri and established a kretek cigar factory. Today, Gudang Garam is the major employer of the city, with more than 40,000 workers.

The city of Kediri is divided into three districts (kecamatan), tabulated below with their areas and their population totals from the 2010 Census[11] and the 2020 Census.[12] The table also includes the number of administrative villages (urban kelurahan) in each district, and its postal codes.

Being the site of an ancient capital of Javanese kingdoms, the city is one of the major cultural centres for Javanese people, the city also contains some ancient ruins and candis that date back to the era of the Kediri and Majapahit Kingdom.

The city of Kediri hardly has any natural attractions for a tourist destination. A few amusement parks are present, e.g. Paggora Amusement Park, Tirtayasa Water Park, Selomangleng Water Park. Selomangleng Cave is a man-made cave, allegedly used by the princess Dewi Kilisuci to meditate, according to folk tales. A few shopping centres are also built in the city, such as Golden Swalayan, and Kediri Mall. Along with the older shopping district Jalan Dhoho they serve the population of Kediri (both the city and the regency) and the surrounding areas.

In 1906 Kediri was given the status of a gemeente, along with its gemeenteraad. The head was an assistent-resident. In 1929 its status was changed to stadsgemeente with a burgemeester as its head. With the Act no. 16 Year 1950, Kediri is given the status of Kota Besar with a walikota (mayor) within Indonesian administrative structure[16]

Kediri has a tropical savanna climate (Aw) with moderate to little rainfall from June to October and heavy rainfall from November to May.