From Wikipedia, the free encyclopedia
Jump to navigation Jump to search
President of the United Arab Emirates from 2004 to 2022
Not to be confused with Khalifa bin Zayed bin Khalifa Al Nahyan.
In this Arabic name, the surname is Al Nahyan.

Khalifa was the eldest son of Zayed bin Sultan Al Nahyan, the first president of the United Arab Emirates. As crown prince of Abu Dhabi, Khalifa carried out some aspects of the presidency in a de facto capacity from the late 1990s when his father faced health problems.[6] He succeeded his father as the ruler of Abu Dhabi on 2 November 2004, and the Federal Supreme Council elected him as president of the UAE the following day. As ruler of Abu Dhabi, he attracted cultural and academic centers to Abu Dhabi, helping establish the Louvre Abu Dhabi, New York University Abu Dhabi, and Sorbonne University Abu Dhabi. He also established Etihad Airways.[7]

During Khalifa's presidency, the United Arab Emirates became a regional economic powerhouse and its non-oil economy grew.[8][7] Khalifa was viewed as a pro-Western modernizer whose low-key approach helped steer the country through a tense era in regional politics and forged closer ties with the United States and Israel.[9] As president during the financial crisis of 2007–2008, he led efforts to protect the federation by directing the payment of billions of dollars in emergency bailout funds into Dubai.[7] On 4 January 2010, the world's tallest man-made structure, originally known as Burj Dubai, was renamed the Burj Khalifa in his honor.[10]

In January 2014, Khalifa had a stroke and was in stable condition after surgery.[11] He then assumed a lower profile in state affairs but retained ceremonial presidential powers. His half-brother Mohamed bin Zayed Al Nahyan carried out public affairs of the state and day-to-day decision-making of the Emirate of Abu Dhabi.[12] In 2018, Forbes named Khalifa in its list of the world's most powerful people.[13] Following his death in 2022, Khalifa was succeeded by his brother Mohamed.

Khalifa was born on 7 September 1948 at Qasr Al-Muwaiji, Al Ain, in Abu Dhabi (then part of the Trucial States), the eldest son of Hassa bint Mohammed Al Nahyan and Zayed bin Sultan Al Nahyan.[14][15] He was a graduate of the Royal Military Academy Sandhurst.[16]

On 1 February 1969, Khalifa was nominated the Crown Prince of Abu Dhabi, and on the next day he was appointed Head of the Abu Dhabi Department of Defense. In that post, he oversaw the build up of the Abu Dhabi Defense Force, which after 1971 became the core of the UAE Armed Forces.[6]

In May 1976, he became deputy commander of the UAE Armed Forces, under the President.[20] He also became the head of the Supreme Petroleum Council in the late 1980s. The post granted him wide powers in energy matters.[21] He was also the chairman of the Environmental Research and Wildlife Development Agency.[22]

He succeeded to the posts of Emir of Abu Dhabi and President of the United Arab Emirates (UAE) on 3 November 2004, replacing his father Zayed bin Sultan Al Nahyan, who had died the day before. He had been acting president since his father became ill prior to his passing.[6]

On 1 December 2005, the President announced that half of the members of the Federal National Council (FNC), an assembly that advises the president, would be indirectly elected. Half of the council's members were still appointed by the leaders of the emirates.[23]

In 2009, Khalifa was re-elected as President for a second five-year term.[24]

In 2010, Khalifa was described in a WikiLeaks cable signed by then U.S. ambassador Richard G. Olson as a "distant and uncharismatic personage."[25] The cable said that Khalifa had risked his reputation and the UAE’s future since 1990, when he described the United States as willing to shed blood to maintain international order and stability in the Gulf.

In March 2011, Khalifa sent the United Arab Emirates Air Force to support the military intervention in Libya against Muammar Gaddafi, alongside forces from NATO, Qatar, Sweden, and Jordan.[26][27]

Khalifa pledged the full support of the UAE to the Bahrain in the face of pro-democracy uprising in 2011.[28]

In January 2014, Khalifa had a stroke and was reported to have been in a stable condition after undergoing an operation.[11]

During his presidency in February 2022, the UAE signed partnership agreements with Israel on tourism and healthcare.[32] 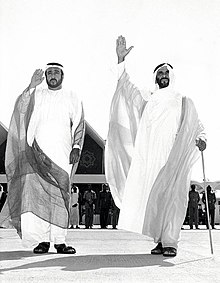 Sheikh Khalifa paid $500,000 for the 29.8-acre site of his palace in 2005, according to the sales document. A Seychelles planning authority initially rejected the palace's building plans, a decision overturned by President James Michel's cabinet.[38] A month after the start of construction of the palace, the national utility company warned that the site's plans posed threats to the water supply. Joel Morgan, the Seychelles' minister of the environment, said the government did not tender the land because it wanted it to go to Sheikh Khalifa. Morgan said "the letter of the law" might not have been followed in the land sale.[38]

In February 2010, the sewage system set up by Ascon, the company building the palace, for the site's construction workers overflowed, sending rivers of waste through the region, which is home to more than 8000 residents.[38] Local government agencies and officials from Khalifa's office responded quickly to the problem, sending in technical experts and engineers. Government officials concluded that Ascon ignored health and building codes for their workers, and fined the company $81,000. Ascon blamed the incident on "unpredicted weather conditions".[38] Khalifa's presidential office offered to pay $15 million to replace the water-piping system for the mountainside, and Seychelles' government representatives and residents say Ascon has offered to pay roughly $8,000 to each of the 360 households that were affected by the pollution.[38]

In April 2016, Sheikh Khalifa was named in the Panama Papers by the International Consortium of Investigative Journalists;[42] he reportedly owned luxury properties in London worth more than $1.7 billion via shell companies that Mossack Fonseca set up and administers for him in the British Virgin Islands.[43]

The Ministry of Presidential Affairs announced a 40-day national mourning with flags at half staff along with a three-day suspension of work in private firms and the official entities at the federal and local levels of institution.[49] State mourning was also announced in many other Arab League nations. Bahrain,[50] Lebanon,[51] Oman,[52] Mauritania[53] and Qatar[54] declared official mourning and flags at half-mast for three days. In Jordan, mourning was declared for 40 days[55] while flags will fly half-mast in Kuwait.[56] Pakistan announced a three-day mourning and flags were raised at half mast.[57][58] India also declared a period of national mourning with flags at half staff for one day starting from 14 May 2022.[59][60]