From Wikipedia, the free encyclopedia
Jump to navigation Jump to search
Version(s) of the sport of cricket

Limited overs cricket, also known as one-day cricket, is a version of the sport of cricket in which a match is generally completed in one day. There are a number of formats, including List A cricket (8-hour games), Twenty20 cricket (3-hour games), and 100-ball cricket (2.5 hours). The name reflects the rule that in the match each team bowls a set maximum number of overs (sets of 6 legal balls), usually between 20 and 50, although shorter and longer forms of limited overs cricket have been played.

The concept contrasts with Test and first-class matches, which can take up to five days to complete. One-day cricket is popular with spectators as it can encourage aggressive, risky, entertaining batting, often results in cliffhanger endings, and ensures that a spectator can watch an entire match without committing to five days of continuous attendance. 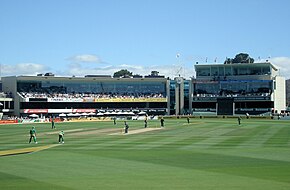 A one-day match at Bellerive Oval

Each team bats only once, and each innings is limited to a set number of overs, usually fifty in a One Day International and between forty and sixty in a List A. List A is a classification of the limited-overs (one-day) form of cricket, technically as the domestic level.

Despite its name, important one-day matches, international and domestic, often have two days set aside, the second day being a "reserve" day to allow more chance of the game being completed if a result is not possible on the first day (for instance if play is prevented or interrupted by rain).

In some tied limited-overs games, a Super Over is played, wherein each team bats for a one-over innings with two wickets in hand. A tied Super Over may be followed by another Super Over.[1]

In almost all competitive one-day games, a restriction is placed on the number of overs that may be bowled by any one bowler. This is to prevent a side playing two top-class bowlers with extremely good stamina who can bowl throughout their opponents' innings. The usual limitation is set so that a side must include at least five players who bowl i.e. each bowler can only bowl 20% of the overs. For example, the usual limit for twenty-over cricket is four overs per bowler, for forty-over cricket eight per bowler and for fifty-over cricket ten per bowler.[2] There are exceptions: Pro Cricket in the United States restricted bowlers to five overs each, thus leaving a side requiring only four bowlers.[3]

Limited over cricket is usually played with white balls rather than the traditional red balls. This was introduced because the team batting second is likely to need to play under floodlights and a white ball is easier to see under these conditions. The white balls are supposed to be otherwise identical to traditional balls, but according to BBC Sport, some cricketers claim that the harder surface causes white balls to swing more.[4]

The idea for a one-day, limited 50-over cricket tournament, was first played in the inaugural match of the All India Pooja Cricket Tournament in 1951 at Tripunithura in Kochi, Kerala. It is thought to be the brain child of KV Kelappan Thampuran, a former cricketer and the first Secretary of the Kerala Cricket Association.[5] The first limited-overs tournament between first-class English teams was the Midlands Knock-Out Cup, which took place in May 1962.[6] Played with 65-over innings, the Cup was organised by Mike Turner, secretary of the Leicestershire County Cricket Club. The competition was small, with three other county teams participating in addition to Leicestershire. However, it drew commercial television coverage and positive commentary by journalists, who noted the potential to attract sponsors and spectators amid declining attendance levels.[6][7]

The following year, the first full-scale one-day competition between first-class teams was played, the knock-out Gillette Cup, won by Sussex. The number of overs was reduced to 60 for the 1964 season. League one-day cricket also began in England, when the John Player Sunday League was started in 1969 with forty over matches. Both these competitions have continued every season since inauguration, though the sponsorship has changed. There is now one 50 over competition, which is called the Royal London One-Day Cup.

The first Limited Overs International (LOI) or One-Day International (ODI) match was played in Melbourne in 1971, and the quadrennial cricket World Cup began in 1975. Many of the "packaging" innovations, such as coloured clothing, were as a result of World Series Cricket, a "rebel" series set up outside the cricketing establishment by Australian entrepreneur Kerry Packer. For more details, see History of cricket.

Twenty20, a curtailed form of one-day cricket with 20 overs (120 legal balls) per side, was first played in England in 2003. It has proven very popular, and several Twenty20 matches have been played between national teams. It makes several changes to the usual laws of cricket, including the use of a Super Over (one or more additional overs played by each team) to decide the result of tied matches.

100-ball cricket (2.5-hour games), another form of one-day cricket with 100 deliveries per side, launched in England in 2021. It is designed to further shorten game time and to attract a new audience. It makes further changes to the usual laws of cricket, such as the involvement of overs that last 5 balls each.

There are now also T10 leagues with a format of 10 overs per side (resulting in 90-minute games). The Emirates Cricket Board also launched Ninety–90 Bash, an upcoming annual franchise-based 90-ball cricket league in the United Arab Emirates.[8] 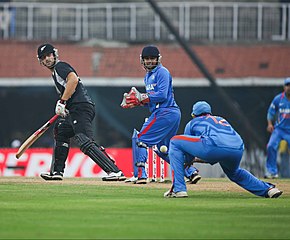 Chennai hosted an ODI match between India and New Zealand in 2010. The New Zealand batsman is in black, and India in blue are the fielding team.

One Day International matches are usually played in brightly coloured clothing often in a "day-night" format where the first innings of the day occurs in the afternoon and the second occurs under stadium lights.

In the early days of ODI cricket, the number of overs was generally 60 overs per side, and matches were also played with 40, 45 or 55 overs per side, but now it has been uniformly fixed at 50 overs.

Every four years, the Cricket World Cup involves all the Test-playing nations and other national sides who qualify through the ICC World Cup Qualifier. It usually consists of round-robin stages, followed by semi-finals and a final. The International Cricket Council (ICC) determines the venue far in advance.

The ICC Champions Trophy also involves all the Test-playing nations, and is held between World Cups. It usually consists of a round-robin group stage, semifinals, and a final.

Each Test-playing country often hosts triangular tournaments, between the host nation and two touring sides. There is usually a round-robin group stage, and then the leading two teams play each other in a final, or sometimes a best-of-three final. When there is only one touring side, there is still often a best-of-five or best-of-seven series of limited overs matches.

The ICC World Cricket League is an ODI competition for national teams with Associate or Affiliate status.

Domestic one-day competitions exist in almost every country where cricket is played.

Most cricketing nations have some form of domestic List A competition. The number of overs in List A cricket ranges from forty to sixty overs per side.

The Association of Cricket Statisticians and Historians created this category for the purpose of providing an equivalent to first-class cricket, to allow the generation of career records and statistics for comparable one-day matches. Only the more important one-day competitions in each country, plus matches against a touring Test team, are included. The categorisation of cricket matches as "List A" was not officially endorsed by the International Cricket Council until 2006, when the ICC announced that it and its member associations would be determining this classification in a manner similar to that done for first class matches.[9] 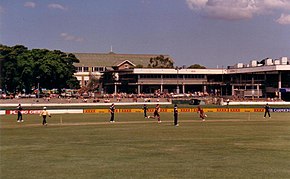 Queensland Bulls versus Victorian Bushrangers in a one-day match at the Brisbane Cricket Ground (The Gabba), Queensland, Australia

The Marsh One Day Cup is a 50 overs tournament held since 1969. The sides that compete are the following:

The Dhaka Premier Division Cricket League is sponsored by Walton. It has been Bangladesh's List A competition since the 2013–14 season. Twelve teams compete; the bottom two are relegated each year and replaced by the top two from the league below. In 2017-18 the teams were:

Bangladesh's T20 competition is the Bangladesh Premier League. It has been contested annually since the 2011–12 season. Seven teams take part:

Each county has a team representing them in each league and are as follows, with their home ground:

The Pakistani domestic competition changes regularly, but for 2005–06 there are plans for three one-day tournaments for men.

National Bank Patron's Cup: A two-week tournament running just before the National Bank Cup, with one group of five teams and another group of six teams. The top two teams from each group proceed to the semi-final. The teams that compete are:

National Bank Twenty20 Cup: A tournament running one week in mid-March. The same groups apply as in the NATIONAL BANK Cup, and there will be two semi-finals and a final following the group stages. The tournament will be held in Karachi and Lahore.

Pakistan Super League — a professional franchise Twenty20 men's cricket league. The league is headquartered in Lahore, consists of five franchises nominally representing cities in Pakistan . It is operated by the Pakistan Cricket Board (PCB) and was established in 2016.Following are the teams:

The games are 50 overs, and based on a home-and-away round-robin match system (each team plays ten matches) with semi-finals and a final. The current champions are the Dolphins who topped the round-robin standings before the season was curtailed by the COVID-19 lockdown in South Africa.[10]

20 teams compete in the Premier Limited-Overs Tournament, which is an expansion from 16 in the last season. Games are played over 50 overs per side, and the teams are divided into two groups, where each team meets the other once over a period of a month. The four top teams from each group qualify for the quarter-finals, and there is then a direct knock-out system until a winner is found after three knock-out stages. The competing teams are:

The NAGICO Regional Super50 is the main regional one-day competition in the West Indies. In recent years, it has been run over a week's time as a group stage followed by knock-out stages. Trinidad and Tobago have won the most titles.

The world record for the highest innings total in any List A limited overs match is 496 for 4 by Surrey against Gloucestershire in their Friends Provident Trophy 50-overs match at the Oval, London on 29 April 2007. That surpassed the 443 for nine by Sri Lanka against the Netherlands in their One Day International 50-overs match at Amstelveen on 4 July 2006, which was the record ODI score at the time. On 19 June 2018, England set a new international record, totalling 481 for 6 against Australia at Trent Bridge. The lowest ever total is 23 by Yorkshire against Middlesex at Headingley in 1974 in a 40-overs match. The record low score in ODIs was set by Zimbabwe, who managed just 35 against Sri Lanka in Harare on 25 April 2004.

The most runs scored by both sides in any List A limited overs match is 872: Australia, batting first, scored 434 for four in 50 overs, and yet were beaten by South Africa who scored 438 for nine with a ball to spare during their One Day International at Johannesburg in 2006.

The most runs in an over was scored by Herschelle Gibbs of the South African cricket team when, in the 2007 Cricket World Cup in the West Indies, he hit 6 sixes in one over bowled by Daan van Bunge of the Netherlands.[12]

This record is shared by Yuvraj Singh of India who achieved this feat in the 2007 ICC World Twenty20 in South Africa, he hit 6 sixes in an over bowled by Stuart Broad of England.