From Wikipedia, the free encyclopedia
Jump to navigation Jump to search
Missions and flights of NASA's Apollo Program 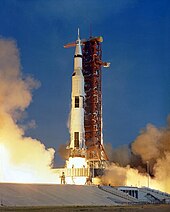 The Apollo program was a United States human spaceflight program carried out from 1961 to 1972 by the National Aeronautics and Space Administration (NASA), which landed the first astronauts on the Moon.[1] The program used the Saturn IB and Saturn V launch vehicles to lift the Command/Service Module (CSM) and Lunar Module (LM) spacecraft into space, and the Little Joe II rocket to test a launch escape system which was expected to carry the astronauts to safety in the event of a Saturn failure.[2] Uncrewed test flights beginning in 1966 demonstrated the safety of the launch vehicles and spacecraft to carry astronauts, and four crewed flights beginning in October 1968 demonstrated the ability of the spacecraft to carry out a lunar landing mission.

Apollo achieved the first crewed lunar landing on the Apollo 11 mission, when Neil Armstrong and Buzz Aldrin landed their LM Eagle in the Sea of Tranquility and walked on the lunar surface, while Michael Collins remained in lunar orbit in the CSM Columbia, and all three landed safely on Earth on July 24, 1969.[3] Five subsequent missions landed astronauts on various lunar sites, ending in December 1972 with twelve men having walked on the Moon[4] and 842 pounds (382 kg) of lunar rocks and soil samples returned to Earth, greatly contributing to the understanding of the Moon's composition and geological history.[5]

Two Apollo missions were failures: a 1967 cabin fire killed the entire Apollo 1 crew during a ground test in preparation for what was to be the first crewed flight;[6] and the third landing attempt on Apollo 13 was aborted by an oxygen tank explosion en route to the Moon, which disabled the CSM Odyssey's electrical power and life support systems, and made the propulsion system unsafe to use. The crew circled the Moon and were returned safely to Earth using the LM Aquarius as a "lifeboat" for these functions.[7]

From 1961 through 1967, Saturn launch vehicles and Apollo spacecraft components were tested in uncrewed flights.

The Saturn I launch vehicle was originally planned to carry crewed Command Module flights into low Earth orbit, but its 20,000-pound (9,100 kg) payload capacity limit could not lift even a partially fueled Service Module, which would have required building a lightweight retrorocket module for deorbit. These plans were eventually scrapped, in favor of using the uprated Saturn IB to launch the Command Module with a half-fueled Service Module for crewed Earth orbit tests. This limited Saturn I flights to Saturn launch vehicle development, CSM boilerplate testing, and three micrometeroid satellite launches in support of Apollo.

The Saturn I was converted to the Uprated Saturn I, eventually designated Saturn IB, by replacing the S-IV second stage with the S-IVB, which would also be used as the third stage of the Saturn V with the addition of on-orbit restart capability. This increased the payload capacity to 46,000 pounds (21,000 kg), enough to orbit a Command Module with a half-fueled Service Module, and more than enough to orbit a fully fueled Lunar Module.

Two suborbital tests of the Apollo Block I Command and Service Module, one S-IVB development test, and one Lunar Module test were conducted. Success of the LM test led to cancellation of a planned second uncrewed flight.

From August 1963 to January 1966, a number of tests were conducted at the White Sands Missile Range for development of the launch escape system (LES). These included simulated "pad aborts", which might occur while the Apollo-Saturn space vehicle was still on the launch pad, and flights on the Little Joe II rocket to simulate Mode I aborts which might occur while the vehicle was in the air.[1] 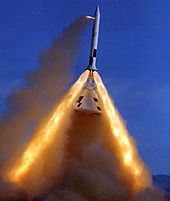 Prior to George Mueller's tenure as NASA's Associate Administrator for Manned Space Flight starting in 1963, it was assumed that 20 Saturn Vs, with at least 10 unmanned test flights, would be required to achieve a crewed Moon landing, using the conservative one-stage-at-a-time testing philosophy used for the Saturn I. But Mueller introduced the "all-up" testing philosophy of using three live stages plus the Apollo spacecraft on every test flight. This achieved development of the Saturn V with far fewer uncrewed tests, and facilitated achieving the Moon landing by the 1969 goal. The size of the Saturn V production lot was reduced from 20 to 15 units.[10]

Three uncrewed test flights were planned to human-rate the super heavy-lift Saturn V which would take crewed Apollo flights to the Moon. Success of the first flight and qualified success of the second led to the decision to cancel the third uncrewed test.

The Apollo program required sequential testing of several major mission elements in the runup to a crewed lunar landing. An alphabetical list of major mission types was proposed by Owen Maynard in September 1967.[11][12] Two "A-type" missions performed uncrewed tests of the CSM and the Saturn V, and one B-type mission performed an uncrewed test of the LM. The C-type mission, the first crewed flight of the CSM in Earth orbit, was performed by Apollo 7.

The list was revised upon George Low's proposal to commit a mission to lunar orbit ahead of schedule, an idea influenced by the status of the CSM as a proven craft and production delays of the LM.[13] Apollo 8 was reclassified from its original assignment as a D-type mission, a test of the complete CSM/LM spacecraft in Earth orbit, to a "C-prime" mission which would fly humans to the Moon. Once complete, it obviated the need for the E-type objective of a medium Earth orbital test. The D-type mission was instead performed by Apollo 9; the F-type mission, Apollo 10, flew the CSM/LM spacecraft to the Moon for final testing, without landing. The G-type mission, Apollo 11, performed the first lunar landing, the central goal of the program.

The Block I CSM spacecraft did not have capability to fly with the LM, and the three crew positions were designated Command Pilot, Senior Pilot, and Pilot, based on U.S. Air Force pilot ratings. The Block II spacecraft was designed to fly with the Lunar Module, so the corresponding crew positions were designated Commander, Command Module Pilot, and Lunar Module Pilot regardless of whether a Lunar Module was present or not on any mission.[16]

Seven of the missions involved extravehicular activity (EVA), spacewalks or moonwalks outside of the spacecraft. These were of three types: testing the lunar EVA suit in Earth orbit (Apollo 9), exploring the lunar surface, and retrieving film canisters from the Scientific Instrument Module stored in the Service Module.[17]

Several planned missions of the Apollo program were canceled for a variety of reasons, including changes in technical direction, the Apollo 1 fire, hardware delays, and budget limitations.