Eva Magdalena Andersson (born 23 January 1967) is a Swedish politician and economist serving as the leader of the Social Democratic Party since 4 November, and prime minister of Sweden since 30 November 2021.

Andersson joined the Social Democratic Youth League in 1983, and in 1992 graduated with a degree in economics. She served as an adviser and director of planning in Göran Persson's administration and as an adviser to Mona Sahlin. After the 2014 election, Andersson was elected to the Riksdag and became finance minister in Stefan Löfven's administration. When Löfven announced his plans to step down in August 2021, she was regarded as the main candidate to succeed him and soon thereafter was elected leader of the Social Democratic Party.

Andersson was elected prime minister of Sweden by the Riksdag on 29 November 2021. Previously, on 24 November, Andersson had been elected in that position but chose to resign after an announcement by her coalition partner, the Green Party, that they were leaving the government in response to losing the annual budget vote in the Riksdag to the conservative opposition. Andersson assumed the office of Prime Minister on 30 November, thus becoming Sweden's first elected female head of government.

Andersson is the only child of Göran Andersson (1936–2002), a lecturer in statistics at Uppsala University, and teacher Birgitta Andersson (b. 1939, née Grunell).[1] Andersson was an elite-level swimmer in her youth.[2][3]

During her high school years, Andersson studied social sciences at the Cathedral School in Uppsala. She graduated in 1987 with top grades in all but one class.[4]

After graduating from high school, Andersson moved to Stockholm to study at the Stockholm School of Economics,[5] where she graduated in 1992 with a master's degree in economics. She then worked as a doctoral student in economics at the Stockholm School of Economics from 1992 to 1995, but ended her studies in advance. In the autumn of 1994, she studied at the Institute of Advanced Studies in Vienna. In the spring of 1995, she studied at Harvard University.[6]

Andersson joined the Social Democratic Youth League (SSU) in 1983, during her first year of secondary school.[7] In 1987, she was elected president of the Uppsala section of SSU.[8]

After completing her studies in economics, Andersson gained employment in the Prime Minister's Office as a political adviser to Göran Persson from 1996 to 1998, and later served as Director of Planning from 1998 to 2004. She then spent time in the civil service, working as Secretary of state in the Ministry of Finance from 2004 to 2006, before leaving to again become a political adviser, this time to Opposition Leader Mona Sahlin, from 2007 to 2009. She left this role when the Government nominated her for the role of Chief Director of the Swedish Tax Agency, a position she held until 2012. She resigned upon her adoption as a Social Democratic candidate ahead of the 2014 general election.[9] 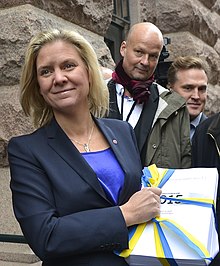 After the Social Democratic victory in the 2014 Swedish general election in which Andersson was elected as a member of the Riksdag, she was appointed as the Minister for Finance by new prime minister Stefan Löfven in his cabinet.[10] As a result of coalition negotiations, while Andersson had overall responsibility for the Finance Ministry, Per Bolund was given responsibility for the oversight of financial markets and consumer protection as the Minister for Financial Markets.[11] Andersson was reappointed as Finance Minister by Löfven following the 2018 election.[12]

In 2020, members of the International Monetary and Financial Committee (IMFC), the primary policy advisory committee of the Board of Governors of the International Monetary Fund (IMF), chose Andersson to serve as Chair of the Committee for a term of three years.[13] She became the first European in that role after more than a decade, as well as the first woman to hold that position.[14]

In August 2021, Prime Minister Stefan Löfven announced he would resign as party leader at the Social Democratic Party Congress in November 2021.[15] Andersson was quickly regarded by many as the candidate most likely to succeed him, and on 29 September, the Social Democratic Party nominating committee announced that Andersson had been chosen as leader-designate ahead of the congress; should the designation be accepted by the Riksdag, Andersson would become leader and Sweden's first female Prime Minister.[16][17]

Leader of the Social Democratic Party[edit]

On 10 November 2021, the incumbent prime minister Stefan Löfven formally resigned from office.[20] As part of the 2021 Swedish government formation, the Speaker of the Riksdag held talks with all party leaders on 11 November 2021 and shortly after tasked Andersson with forming a government, giving her one week.[21] On 23 November 2021, it was announced that Andersson had reached an agreement with the Left Party to support her at the upcoming prime ministerial vote. With the Centre Party having previously agreed to support her, Andersson had the support of the required number of MPs to become Sweden's next prime minister.[22]

On 24 November 2021, Andersson was elected as Sweden's new prime minister by the Riksdag.[23][24] At the time of her election, she would have assumed office formally on 26 November 2021.[25][26] Although she did not receive a majority of "yes" votes, a majority did not vote against her due to abstentions, and this was sufficient to elect her as prime minister.[23]

A few hours after Andersson's election, her budget was defeated in the Riksdag.[27] The opposition budget passed instead. Since the opposition budget was drafted with the support of the right-wing populist Sweden Democrats, the Green Party pulled out of the coalition rather than be bound to govern under it,[28] leading Andersson to resign before taking office.[29][30] This was based on the convention that a prime minister should resign if a party leaves the governing coalition. She notified Speaker Andreas Norlén that she would be interested in leading a Social Democratic single-party government.[23][31][28]

On 29 November 2021, Andersson was reelected as prime minister.[32][33] She was expected to be reelected as prime minister, as all parties that supported her in the first vote (the Centre Party, the Green Party, and the Left Party), indicated their willingness to support her when the Riksdag took another vote.[34][35][36] On 30 November, Andersson was appointed as Prime Minister by King Carl XVI Gustaf.[37] Andersson is the first elected female head of government of Sweden since universal suffrage was introduced in 1921.[23][38][39]

Since 1997, Andersson has been married to Richard Friberg, a professor in economics at the Stockholm School of Economics; they have two children.[47] She and her husband are avid outdoors people; they often go hiking, kayaking and mountaineering.[48] Andersson resides in Nacka.[49]