The original house, which burned down in 1915, was co-founded in 1889 by Charles Zidler and Joseph Oller, who also owned the Paris Olympia. Close to Montmartre in the Paris district of Pigalle on Boulevard de Clichy in the 18th arrondissement, it is marked by the red windmill on its roof. The closest métro station is Blanche.

Moulin Rouge is best known as the birthplace of the modern form of the can-can dance. Originally introduced as a seductive dance by the courtesans who operated from the site, the can-can dance revue evolved into a form of entertainment of its own and led to the introduction of cabarets across Europe. Today, the Moulin Rouge is a tourist attraction, offering musical dance entertainment for visitors from around the world. The club's decor still contains much of the romance of fin de siècle France. 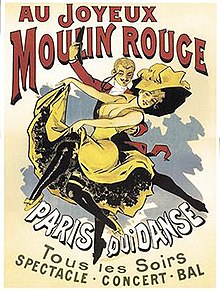 Advertising poster of the Moulin Rouge by Alfred Choubrac, 1896

The Belle Époque was a period of peace and optimism marked by industrial progress, and a particularly rich cultural exuberance was about at the opening of the Moulin Rouge. The Expositions Universelles of 1889 and 1900 are symbols of this period.

The Eiffel Tower was also constructed in 1889, epitomising the spirit of progress along with the culturally transgressive cabaret.[2] Japonism, an artistic movement inspired by the Orient, with Henri de Toulouse-Lautrec as its most brilliant disciple, was also at its height. Montmartre, which, at the heart of an increasingly vast and impersonal Paris, retained a bohemian village atmosphere; festivities and artists mixed, with pleasure and beauty as their values.

On 6 October 1889, the Moulin Rouge opened in the Jardin de Paris, at the foot of the Montmartre hill. Its creator Joseph Oller and his Manager Charles Zidler were formidable businessmen who understood the public's tastes. The aim was to allow the very rich to come and 'slum it' in a fashionable district, Montmartre. The extravagant setting – the garden was adorned with a gigantic elephant – allowed people from all walks of life to mix. Workers, residents of the Place Blanche, artists, the middle classes, businessmen, elegant women, and foreigners passing through Paris rubbed shoulders. Nicknamed "The First Palace of Women" by Oller and Zidler, the cabaret quickly became a great success. 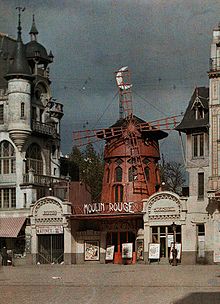 The Moulin Rouge in Autochrome Lumière color, 1914, before the 1915 fire

The ingredients for its success:[1] 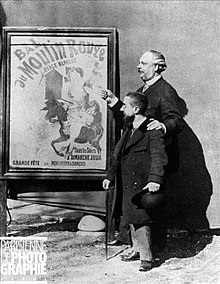 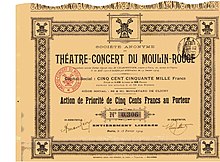 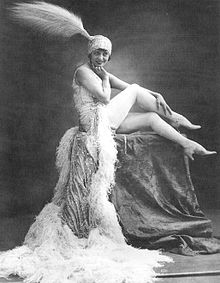 Mistinguett at the Moulin Rouge 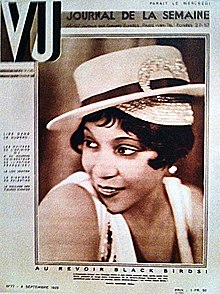 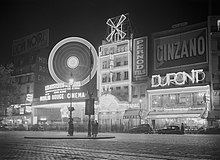 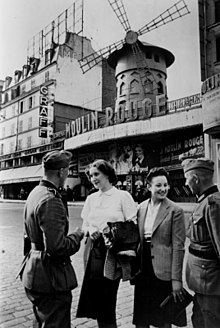 The shows went on during the German occupation. 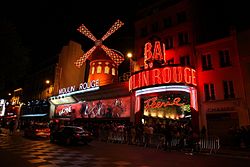 The Moulin Rouge at midnight 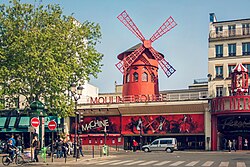 The Moulin Rouge at midday

About Moulin Rouge and its characters[edit]

The Moulin Rouge in Paris was a source of inspiration for: