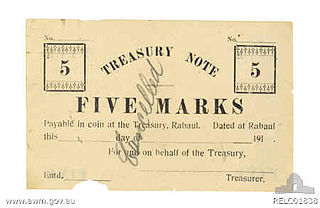 The Mark (German plural: Mark, English plural: marks) was the currency of the colony of German New Guinea between 1884 and 1911. It was equal to the German Mark, which was also legal tender in the colony.

Initially, only German currency circulated. This was supplemented in 1894 by coins issued specifically for New Guinea. These coins were demonetized on 15 April 1911, in exchange for the German Mark, the only legal tender after that date.

In 1914, during World War I, German New Guinea was quickly occupied by Australia. That year, the Australian authorities issued Treasury notes denominated in marks. In 1915, the Mark was replaced by the Australian pound.