From Wikipedia, the free encyclopedia
Jump to navigation Jump to search
Overview of and topical guide to political science

The following outline is provided as an overview of and topical guide to politics and political science:

Politics – the exercise of power; process by which groups of people make collective decisions. Politics is the art or science of running governmental or state affairs (including behavior within civil governments), institutions, fields, and special interest groups such as the corporate, academic, and religious segments of society.

Political science – the field concerning the theory and practice of politics and the description and analysis of political systems and political behavior.

Fields of study of political science[edit] 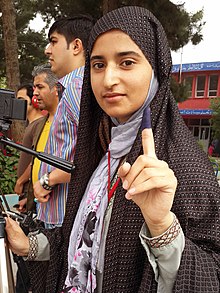 Voting is a key form of decision-making in politics. A female journalist displays her inked finger after casting her vote in Afghanistan's western Herat province. 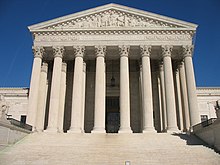 Institutions are often the framework within which politics happens. Pictured is the Supreme Court of the United States.

The separation of powers is typically set in the constitution or basic law in order to achieve checks and balances within government. The typical model has three branches, and is referred to as the trias politica. 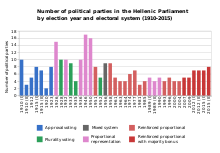 Political parties, and their number, are important aspects of representative systems. The number of political parties in the Hellenic Parliament of Greece has varied across time.

Types of polities and forms of government[edit]

By level of social organisation[edit]

By source of power[edit]