From Wikipedia, the free encyclopedia
Jump to navigation Jump to search
Cricket terminology 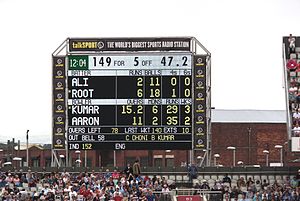 Scoreboard showing the number of overs and maiden overs bowled by two bowlers.

In cricket, an over consists of six legal deliveries bowled from one end of a cricket pitch to the player batting at the other end, almost always by a single bowler.

After six deliveries the umpire calls 'over'; the fielding team switches ends, and a different bowler is selected to bowl from the opposite end. The captain of the fielding team decides which bowler will bowl any given over, and no bowler may bowl two overs in succession.

Although this has not always been so,[2] with overs of four and eight balls used in the past, currently an over must consist of six legal deliveries. If the bowler bowls a wide or a no-ball, that illegal delivery is not counted towards the six-ball tally, and another delivery must be bowled in its place.[3]

During the middle of an over, in the event that a bowler is injured or is sent out of the attack by the umpire (for disciplinary reasons, such as bowling beamers), a teammate completes any remaining deliveries.

Because a bowler may not bowl consecutive overs, the general tactic is for the captain to appoint two bowlers to alternate overs from opposite ends. When one bowler tires or becomes ineffective, the captain will replace that bowler with another. The period of time during which a bowler bowls every alternate over is known as a spell.

In limited overs cricket matches, bowlers are generally restricted in the total number of overs they may bowl in a match. The general rule is that no bowler can bowl more than 20% of the total overs per innings; thus, in a 50-over match each bowler can bowl a maximum of 10 overs.

In Test and first-class cricket, there is no limit to the number of overs in a team's innings, nor is there any limit to how many may be bowled by a single bowler. In these matches, there is a requirement to bowl a minimum of 90 overs in a day's play, to ensure a good spectacle, and to prevent the fielding team from wasting time for tactical reasons.[4]

Number of overs in each format of cricket[edit]

There is only one innings per team in these formats:

The over is a fundamental consideration in the tactical planning of the fielding side. Since a single bowler has only six legal balls to bowl before they must hand the ball to another bowler, the bowler typically plans to use those six balls to set up a pattern of play designed to get a batting player out. For example, they may bowl the first few balls with the same line, length, or spin. The bowler intends to tempt the batting player into scoring runs by providing balls that are relatively easy to hit. If the batting player takes the bait, the bowler can then follow up with a variation designed to hit the wicket, or a ball that is intended to induce a mistake from a batting player who is still in aggressive run-scoring mode, which will result in the batting player being caught out.

Cricket imposes penalties if a team bowls its overs at a very slow over rate,[5] such as fines, loss of competition points, and match bans. If a team is proceeding slowly, some captains will choose to use slow/spin bowlers. Such bowlers have a shorter run up so they complete their overs more quickly. Often this means choosing an inferior strategy by employing a less skilful bowler to avoid penalties that are perceived to be greater, such as being banned or losing points.

Bowling a maiden over in ODI and T20 forms of cricket is quite rare and difficult, as the batting players seek to maximise their scoring opportunities.[6]

If one batting player is right-handed and the other left-handed, they may try to score odd numbers of runs to disrupt the bowling pattern and tire the fielders by making them reposition themselves frequently.[7]

Historical number of balls per over in Test cricket[edit]