Patrick Makau Musyoki (born 2 March 1985) is a runner from Kenya. He is a former world record holder in the marathon—His time of 2:03:38, run at the 2011 Berlin Marathon, was the world record for two years, until it was beaten by Wilson Kipsang Kiprotich at the 2013 Berlin Marathon.[1] He is also notable for his half marathon performances, having won a number of prominent competitions in Europe in sub-1-hour performances.

Makau attended Unyuani School until 1999, after which he joined Kyeni Academy, Misiani. He started running in 2001.[2] He competed at the 2006 IAAF World Road Running Championships and finished in 26th place.

Makau returned to the Hague for the City-Pier-City Loop in 2010 and won for a second time, clocking another sub-one hour time of 59:52.[6] After this he significantly improved his marathon best to 2:04:48 to win the Rotterdam Marathon, becoming the fourth fastest runner over the history of the distance.[7] He opted to stay away from the circuit and focus himself entirely on preparations for the Berlin Marathon.[8] A rematch with Rotterdam runner-up Geoffrey Mutai saw the two take the same positions again. Rain dampened the prospect of a record but Makau out-sprinted Mutai at the finish to clock 2:05:08 and win his first World Marathon Major.[9] In recognition of his performances that year, he was selected as the AIMS World Athlete of the Year in a poll of race organisers.[10]

Makau ran in the 2011 London Marathon and, in spite of a fall at the halfway point, he continued and was narrowly beaten into third at the line by Martin Lel, finishing with a time of 2:05:45.[11] 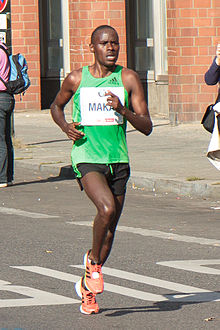 At the Berlin Marathon on 25 September 2011, Makau was set to duel against Haile Gebrselassie, the world record holder from Ethiopia. The Kenyan dropped his more experienced rival after the halfway point and went on to finish in a world record time of 2:03:38 (an average pace of 4:42.9 per mile), beating the existing record by 21 seconds.[12] Prior to the race, he stated that he wanted to bring the marathon world record back to Kenya, following on from a former record holder Paul Tergat.[13] Speaking after the race, Makau said "In the morning my body was not good but after I started the race, it started reacting very well. I started thinking about the record"[13] and "At 32 km I thought I could win the race and even break the world record. It was hard [over] the last 10 kilometres".[14] His world record performance remained for 2 years before falling to fellow Kenyan, Wilson Kipsang Kiprotich, at the 2013 Berlin Marathon, when the record was lowered another 15 seconds to the time of 2:03:23.[15]

He was the pre-race favourite for the Granollers Half Marathon in February, but lost in a sprint finish to Carles Castillejo under cold weather conditions.[16] He ran at the 2012 London Marathon but dropped out mid-race due to injury and was not selected for the Olympic team.[17] He entered the Great Manchester Run in May and came fifth in a time of 28:21 minutes.[18] In the Frankfurt Marathon in October, despite feeling uncomfortable and running most of the time at the back of the leading group, Makau managed to take back the lead from Deressa Chimsa and holding on for the victory, with a time of 2:06:08.[19]

Makau raced in the 2013 London Marathon. He showed to be in poor form, having been outside the lead pack already by the first time point at 5 km, falling farther and farther behind with every time point until 40 km. By halfway, he was nearly 3 minutes behind the leaders, but he slowed further and eventually finished the race in 2:14:10, outside the top 10, more than 8 minutes back from the winner, and more than 10 minutes back from his own world record.