The Pierre-sur-Haute military radio station is a 30-hectare (74-acre) site used for French military communications. It has been used in the service of France since 1913. It is in the Sauvain and Job communes, with the boundary between the Rhône-Alpes and Auvergne regions passing through the site. There are three towers at the site. The tallest one is a 55-metre-high civilian telecommunication tower owned by Télédiffusion de France.[1] The facility is at the summit of Pierre-sur-Haute at an elevation of 1,634 metres (5,361 ft), about 6 kilometres (3.7 mi) from the village of Chalmazel. There is a small ski resort near the radio station, with the top of the quad lift sitting less than 300 metres (980 ft) from the station fence.

In April 2013, the French-language Wikipedia article about the station attracted attention from the French interior intelligence agency DCRI, which pressured the president of Wikimedia France into deleting the article. It was promptly restored by another Wikipedia contributor living in Switzerland. Publicity about the affair resulted in the Streisand effect and many thousands of page views.

The optical telegraph station in 1913

In 1913, a semaphore telegraph (French: télégraphe Chappe) was built where the military radio station is now. At the time, it was a small stone building, with the semaphore on top.[1]

In 1961, during the Cold War, NATO asked the French Army to build the station as part of the 82-node transmission network in Europe known as the ACE High system.[2] In this network, the Pierre-sur-Haute station, or FLYZ, was a relay between the Lachens (FNIZ) station to the south and the Mont-Août (FADZ) station to the north.[3] The NATO radio station was using American-made tropospheric scatter equipment to relay voice and telegraph signals on a network stretching from Turkey to the Arctic Polar Circle in Norway.[2] The French Air Force took control of the station in 1974.[1] In the late 1980s, the system was gradually replaced by a combination of national defense systems and some NATO-owned subsystems.[2] The large parabolic antennas, known locally as Mickey's ears, were replaced with the current two-antenna setup in 1991.[1]

The Pierre-sur-Haute station is controlled by the French Air Force and is a subsidiary of the Lyon – Mont Verdun Air Base, 80 km (50 mi) from the station. It is one of the four radio stations along France's north-south axis, in constant communication with the three others: Lacaune, Henrichemont and the Rochefort air base.[4] The station is mainly used for transmissions relating to the command of operational units. If French nuclear weapons (force de dissuasion) were used, the fire order might pass through this relay.[1]

About 20 personnel are on-site, including electricians, mechanics, and cooks.[1] 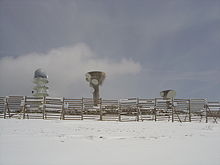 The station is situated on a 30-hectare site between the communes of Sauvain and Job, straddling the border between the two departments of Loire and Puy-de-Dôme. The perimeter is surrounded by a high barrier of wood and metal. Military staff and employees arrive via road or tracked vehicles. This road is closed to the public.[1] Though access is difficult, the facility is not isolated: the Chalmazel ski slopes are adjacent to the site.

The radio station with a snowkite in the foreground

There are three towers at the site. The tallest one is a 55-metre-high civilian telecommunication tower, owned by Télédiffusion de France.[5] The telecommunication tower is topped by a radome and contains a mode S air traffic control radar beacon system owned by the Directorate General for Civil Aviation. The radar has been in operation since 18 August 2009[6][7] but has experienced malfunctions due to heavy snowfall in the area.[8]

The two remaining concrete towers are owned by the military. The 30-metre-high structures[9] have been used since 1991 for radio transmission and reception. These are built to withstand the blast of a nuclear explosion.[1]

Some buildings are used as garages and living quarters, complete with kitchen, dining room and bedrooms. They are linked together by tunnels, 400 metres in total length, so as to avoid walking through thick snow in winter when moving from one building to the other.[1]

The most important part of the site is the underground part, used for transmissions dispatch: at a speed of 2 Mb/s, communications from the towers are analysed, then redirected to be transmitted.[1]

This part of the facility is supplied with chemical, biological, radiological, and nuclear defences. It defends against electromagnetic pulses using a Faraday cage. Positively pressured rooms help prevent contaminants from entering the facility. The facility has independent water and power supplies.[1]

In April 2013, the French-language Wikipedia article Station hertzienne militaire de Pierre-sur-Haute attracted attention from the French interior intelligence agency DCRI. The agency attempted to have the article about the facility removed from the French-language Wikipedia. After a request for deletion in March 2013, the Wikimedia Foundation had asked the DCRI which parts of the article were causing a problem, noting that the article closely reflected information in a 2004 documentary made by Télévision Loire 7, a French local television station, which is freely available online and had been made with the cooperation of the French Air Force.[10][11]

The DCRI then forced Rémi Mathis, a volunteer administrator of the French-language Wikipedia, and president of Wikimedia France, under threat of detention and arrest, into deleting the article.[10][12] The article was promptly restored by another Wikipedia contributor living in Switzerland.[13][14]

As a result of the controversy, the article temporarily became the most read page on the French Wikipedia,[15] with more than 120,000 page views during the weekend of 6/7 April 2013,[16] and is now translated to many languages. For his role in the controversy, Mathis was named Wikipedian of the Year by Jimmy Wales at Wikimania 2013.[17]