From Wikipedia, the free encyclopedia
Jump to navigation Jump to search
Wikipedia portal for content related to Biography 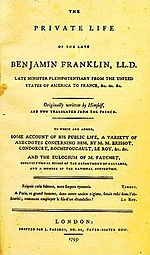 A biography, or simply bio, is a detailed description of a person's life. It involves more than just the basic facts like education, work, relationships, and death; it portrays a person's experience of these life events. Unlike a profile or curriculum vitae (résumé), a biography presents a subject's life story, highlighting various aspects of their life, including intimate details of experience, and may include an analysis of the subject's personality.

Biographical works are usually non-fiction, but fiction can also be used to portray a person's life. One in-depth form of biographical coverage is called legacy writing. Works in diverse media, from literature to film, form the genre known as biography.

Refresh with new selections below (purge)

Did you know... - show different entries

The following are images from various biography-related articles on Wikipedia.

Do you have a question about Wikipedia biographical content that you can't find the answer to? Consider asking it at the Wikipedia reference desk.

For editor resources and to collaborate with other editors on improving Wikipedia's Biography-related articles, see WikiProject Biography.

Quote of the week

In Biography for Beginners, 1905