From Wikipedia, the free encyclopedia
Jump to navigation Jump to search
Wikipedia portal for content related to History 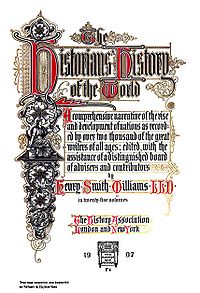 The Historians' History of the World

History (from Greek ἱστορία, historia, meaning "inquiry; knowledge acquired by investigation") is the study and the documentation of the past. Events before the invention of writing systems are considered prehistory. "History" is an umbrella term comprising past events as well as the memory, discovery, collection, organization, presentation, and interpretation of these events. Historians seek knowledge of the past using historical sources such as written documents, oral accounts, art and material artifacts, and ecological markers.

History is also an academic discipline which uses narrative to describe, examine, question, and analyze past events, and investigate their patterns of cause and effect. Historians often debate which narrative best explains an event, as well as the significance of different causes and effects. Historians also debate the nature of history as an end in itself, as well as its usefulness to give perspective on the problems of the present.

Stories common to a particular culture, but not supported by external sources (such as the tales surrounding King Arthur), are usually classified as cultural heritage or legends. History differs from myth in that it is supported by evidence. However, ancient cultural influences have helped spawn variant interpretations of the nature of history which have evolved over the centuries and continue to change today. The modern study of history is wide-ranging, and includes the study of specific regions and the study of certain topical or thematic elements of historical investigation. History is often taught as part of primary and secondary education, and the academic study of history is a major discipline in university studies.

Herodotus, a 5th-century BC Greek historian, is often considered the "father of history" in the Western tradition, although he has also been criticized as the "father of lies". Along with his contemporary Thucydides, he helped form the foundations for the modern study of past events and societies. Their works continue to be read today, and the gap between the culture-focused Herodotus and the military-focused Thucydides remains a point of contention or approach in modern historical writing. In East Asia, a state chronicle, the Spring and Autumn Annals, was reputed to date from as early as 722 BC, although only 2nd-century BC texts have survived. (Full article...)

Outline of history · Index
Refresh with new selections below (purge)

Did you know (auto generated)

This is a Featured article, which represents some of the best content on English Wikipedia. 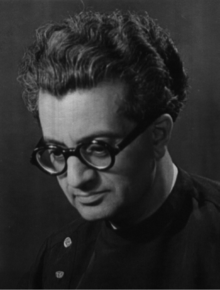 Kaikhosru Shapurji Sorabji (born Leon Dudley Sorabji; 14 August 1892 – 15 October 1988) was an English composer, music critic, pianist and writer whose music, written over a period of seventy years, ranges from sets of miniatures to works lasting several hours. One of the most prolific 20th-century composers, he is best known for his piano pieces, notably nocturnes such as Gulistān and Villa Tasca, and large-scale, technically intricate compositions, which include seven symphonies for piano solo, four toccatas, Sequentia cyclica and 100 Transcendental Studies. He felt alienated from English society by reason of his homosexuality and mixed ancestry, and had a lifelong tendency to seclusion.

Sorabji was educated privately. His mother was English and his father a Parsi businessman and industrialist from India, who set up a trust fund that freed his family from the need to work. Although Sorabji was a reluctant performer and not a virtuoso, he played some of his music publicly between 1920 and 1936. In the late 1930s, his attitude shifted and he imposed restrictions on performance of his works, which he lifted in 1976. His compositions received little exposure in those years and he remained in public view mainly through his writings, which include the books Around Music and Mi contra fa: The Immoralisings of a Machiavellian Musician. During this time, he also left London and eventually settled in the village of Corfe Castle, Dorset. Information on Sorabji's life, especially his later years, is scarce, with most of it coming from the letters he exchanged with his friends. (Full article...)
edit

More Did you know...

More did you know facts

Things you can do