Science (from Latin scientia 'knowledge') is a systematic enterprise that builds and organizes knowledge in the form of testable explanations and predictions about the universe.

The earliest roots of science can be traced to Ancient Egypt and Mesopotamia in around 3000 to 1200 BCE. Their contributions to mathematics, astronomy, and medicine entered and shaped Greek natural philosophy of classical antiquity, whereby formal attempts were made to provide explanations of events in the physical world based on natural causes. After the fall of the Western Roman Empire, knowledge of Greek conceptions of the world deteriorated in Western Europe during the early centuries (400 to 1000 CE) of the Middle Ages, but was preserved in the Muslim world during the Islamic Golden Age. The recovery and assimilation of Greek works and Islamic inquiries into Western Europe from the 10th to 13th century revived "natural philosophy", which was later transformed by the Scientific Revolution that began in the 16th century as new ideas and discoveries departed from previous Greek conceptions and traditions. The scientific method soon played a greater role in knowledge creation and it was not until the 19th century that many of the institutional and professional features of science began to take shape; along with the changing of "natural philosophy" to "natural science."

Modern science is typically divided into three major branches that consist of the natural sciences (e.g., biology, chemistry, and physics), which study nature in the broadest sense; the social sciences (e.g., economics, psychology, and sociology), which study individuals and societies; and the formal sciences (e.g., logic, mathematics, and theoretical computer science), which deal with symbols governed by rules. There is disagreement, however, on whether the formal sciences actually constitute a science as they do not rely on empirical evidence. Disciplines that use existing scientific knowledge for practical purposes, such as engineering and medicine, are described as applied sciences.

New knowledge in science is advanced by research from scientists who are motivated by curiosity about the world and a desire to solve problems. Contemporary scientific research is highly collaborative and is usually done by teams in academic and research institutions, government agencies, and companies. The practical impact of their work has led to the emergence of science policies that seek to influence the scientific enterprise by prioritizing the development of commercial products, armaments, health care, public infrastructure, and environmental protection. (Full article...)

Refresh with new selections below (purge) 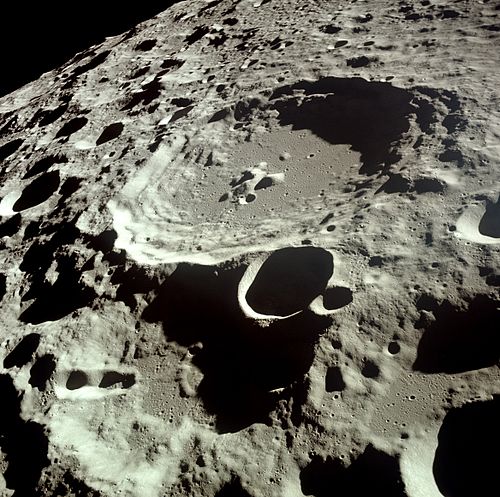 Moon
Credit: Apollo 11 Crew, NASA
The far side of the Moon as photographed by the crew of Apollo 11. The largest crater pictured is the Daedalus crater.
edit

Sir Frank Macfarlane Burnet (3 September 1899 – 31 August 1985) was an Australian virologist best known for his contributions to immunology. He went on to conduct pioneering research on bacteriophages and viruses at the Walter and Eliza Hall Institute, and served as director of the Institute from 1944 to 1956. His virology research resulted in significant discoveries concerning their nature and replication and their interaction with the immune system.

From the mid-1950s, he worked extensively in immunology and was a major contributor to the theory of clonal selection, which explains how lymphocytes target antigens for destruction. Burnet and Peter Medawar were co-recipients of the 1960 Nobel Prize in Physiology or Medicine for demonstrating acquired immune tolerance. This research provided the experimental basis for inducing immune tolerance, the platform for developing methods of transplanting solid organs.

More did you know...

See the portal's Topics and categories page for a comprehensive overview.
edit

7 January 2022 – Discoveries of exoplanets
Researchers from the University of Bern announce the discovery of TOI-2257 b, an eccentric exoplanet that orbits near a red dwarf. (Phys.org)
14 December 2021 – Living With a Star
Scientists announce that NASA's Parker Solar Probe became the first ever spacecraft to enter the stellar corona of the Sun during a flyby in April. (The Guardian)
29 November 2021 –
Researchers from the National Autonomous University of Mexico discover two new antibiotic molecules inside the venom of a scorpion from the Diplocentrus genus, which may hold the properties to stop several different kinds of harmful bacteria and tumour cells. (The Yucatan Times)
25 November 2021 – COVID-19 pandemic
South African scientists detect a new COVID-19 variant named Lineage B.1.1.529 that poses a "major threat" to efforts to reduce the spread of the virus, and blames the variant for the exponential rise of new cases in the country. (Deutsche Welle)
16 November 2021 – Belarus–European Union relations
Researchers at the American cybersecurity firm Mandiant report that the Belarusian government has ties to the hacker group Ghostwriter, which was accused of targeting various German politicians and ministries in September and has since been accused of launching misinformation campaigns against Poland, Lithuania, Latvia, and Ukraine. (RFE/RL)
5 November 2021 – Climate change
Researchers from James Cook University report that 98% of the Great Barrier Reef has been affected by coral bleaching as a result of climate change, which is more than was previously thought to have been affected. (The Guardian)

The following are images from various science-related articles on Wikipedia.