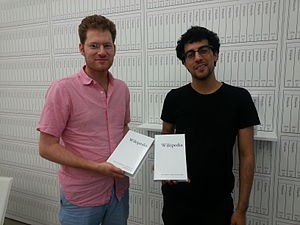 Artist Michael Mandiberg and their assistant Jonathan Kiritharan of the "Print Wikipedia" project, at the "From Aaaaa! to ZZZap!" exhibition, on the day before its opening at Denny Gallery, New York City, USA.[1]

Print Wikipedia is an art project by Michael Mandiberg that printed 106 of the 7,473 volumes of English Wikipedia as it existed on April 7, 2015. The project shows the spines of the first 1,980 volumes in the set, supplemented by 106 actual physical volumes, each of which runs to 700 pages.[1][2] A 36-volume index of all of the 7.5 million contributors to English Wikipedia is also part of the project. The table of contents takes up 91 700-page volumes.[3] The printed volume only includes text of the articles: images and references are not included.[4] The project was shown at the Denny Gallery in New York City in the summer of 2015.[5] Similar projects have been held with a printed part of the German Wikipedia (Berlin, 2016) and with the Dutch Wikipedia (Ghent, 2016)[6]

Mandiberg originally thought of the project in 2009 but ran into technical difficulties. They then engaged an assistant, Jonathan Kirinathan, to aid with the programming of the code to compile, format and upload an entire English Wikipedia download.[1] The print files were uploaded to self book publisher Lulu.com and are available for printout as paper volumes.

Mandiberg's motivation was to answer the question, "How big is it?" For a big data entity, its size is on the threshold of what can be perceived as a collection of volumes, but not so large as to overwhelm one's senses, such as the data files of Facebook or the NSA.[7] Katherine Maher, the Executive Director of the Wikimedia Foundation, described it as "a gesture at knowledge". Wikimedia cooperated with the project and Lulu.com helped fund it.[3]

The task took three years, and the upload process took 24 days, 3 hours and 18 minutes. It was completed on 12 July 2015.[8] PediaPress had attempted to raise money for a full English Wikipedia printout on Indiegogo in 2014, with a goal of $50,000 (£30,000), but the project was pulled.[9] The pulled project had intended to print 1,000 volumes, which would include 1,200 pages each: 1,200,000 pages in total equal to about 80 meters of shelf space.[10] Mandiberg later assured people that they would not be printing out the entire collection, claiming that an entire collection is not necessary for people to comprehend the true size of Wikipedia, and, once people have seen a portion of it, it will help them realize its size.[11] Mandiberg estimates that the printing costs of a full printout would be around $500,000. The Denny art exhibit featured only a selection of actual printed volumes with about 2,000 of the other volumes represented as spines on the wall. The show revolved around the actual upload of the print files to Lulu.com.[5]