The Ranji Trophy (also known as Paytm Ranji Trophy for sponsorship reason) is a domestic first-class cricket championship played in India between multiple teams representing regional and state cricket associations. The competition currently consists of 38 teams, with all 28 states in India and four of the eight union territories having at least one representation. The competition is named after the first Indian cricketer who played international cricket, Ranjitsinhji, who was also known as 'Ranji'. 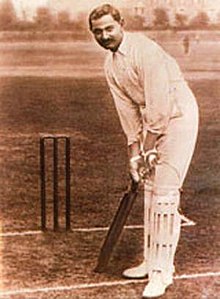 Ranjitsinhji, after whom the tournament is named

The competition was launched following a meeting in July 1934,[1] with the first fixtures taking place in 1934–35. The trophy was donated by Bhupinder Singh, the Maharaja of Patiala.[1] The first match of the competition was held on 4 November 1934 between Madras and Mysore at the Chepauk ground in Madras. Mumbai (Bombay) have won the tournament the most times with 41 wins including 15 back-to-back wins from 1958–59 to 1972–73.

The 2020–21 Ranji Trophy tournament was cancelled due to the COVID-19 pandemic,[2] the first time since the tournament's inception in the 1934–35 season that the Ranji Trophy was not held,[3] instead, the BCCI has decided to organize 50 overs Vijay Hazare Trophy.[4]

The following 38 teams currently participate in the Ranji Trophy:

The following teams have appeared in the Ranji Trophy, but no longer do so:

From the Ranji Trophy's inception until the 2001 season (with the exception of 1948-49 season), the teams were grouped geographically into four or five zones – North, West, East, and South, with Central added in 1952–53. Initial matches were played within the zones on a knock-out basis until 1956–57, and thereafter on a league basis, to determine a winner; then, the five individual zone winners competed in a knock-out tournament, leading to a final which decided the winner of the Ranji Trophy. From the 1970–71 season, the knock-out stage was expanded to the top two teams from each zone, a total of ten qualifying teams. This was expanded again to the top three from each zone in 1992–93, a total of fifteen qualifying teams; between 1996–97 and 1999–2000, the fifteen qualifying teams competed in a secondary group stage, with three groups of five teams, and the top two from each group qualified for a six-team knock-out stage; in all other years until 2001–02, a full fifteen-team knock-out tournament was held.

The format was changed in the 2002–03 season with the zonal system abandoned and a two-division structure adopted – the Elite Group, containing fifteen teams, and the Plate Group, containing the rest. Each group had two sub-groups which played a round-robin; the top two from each Elite sub-group then contested a four-team knock-out tournament to determine the winner of the Ranji Trophy. The team which finished last in each Elite sub-group was relegated, and both Plate Group finalists were promoted for the following season. For the 2006–07 season, the divisions were re-labelled the Super League and Plate League respectively.

From the 2012–13 season, this format was adjusted slightly. The Super League and Plate League names were abandoned, but the two-tier system remained. The top tier expanded from fifteen teams to eighteen teams, in two sub-groups of nine (known as Group A and Group B, and considered equal in status); and the second tier was reduced to nine teams in a single group (known as Group C). The top three teams from Groups A and B and the top two from Group C contest the knockout phase. The lowest placed team in each of Group A and Group B is relegated to Group C, and the top two from Group C are promoted to the top tier.

For the 2017-18 season, the two-tier system was abandoned to have 4 groups of seven teams each and two quarter-finalists from each group.

Round-robin matches are four days in length; knockout matches are played for five days. Throughout its history, if there is no outright result in a Ranji Trophy knock-out match, the team leading after the first innings is the winner.

Prior to the 2016–17 season, matches were played at the home ground of one of the two teams taking part. For the 2016–17 competition, the BCCI decided that all games would be staged at a neutral venue.[5]

Points in the league stages of both divisions are currently awarded as follows:

† Some sources credit Goel with 636 or 640 wickets instead – see Rajinder Goel article for details.

The following teams have won the tournament:[1]

Mumbai/Bombay have played in 46 of the 86 finals till 2016–17 and have won total 41 Ranji Trophy championships, the most by any team.