From Wikipedia, the free encyclopedia
Jump to navigation Jump to search
American founder of the Silk Road website

Ross William Ulbricht (born March 27, 1984) is an American who created and operated the darknet market website Silk Road from 2011 until his arrest in 2013.[4] The site used Tor for anonymity and bitcoin as a currency and facilitated the sale of narcotics and other illegal sales.[5][6] One of Ulbricht's online pseudonyms was "Dread Pirate Roberts" after the fictional character in the novel The Princess Bride and its film adaptation.

Ulbricht grew up in Austin, Texas. He was a Boy Scout,[12] attaining the rank of Eagle Scout.[13] He attended West Ridge Middle School[14] and Westlake High School, both near Austin; graduating from high school in 2002.[15]

Ulbricht attended the University of Texas at Dallas on a full academic scholarship,[13] and graduated in 2006 with a bachelor's degree in physics.[15] He then attended Pennsylvania State University, where he was in a master's degree program in materials science and engineering and studied crystallography.[14] By the time Ulbricht graduated, he had become interested in libertarian economic theory; he adhered to the political philosophy of Ludwig von Mises, supported Ron Paul, promoted agorism, and participated in college debates to discuss his economic views.[14][16][17] Ulbricht graduated from Penn State in 2009 and returned to Austin. He tried day trading and started a video game company; both ventures failed.[14] He eventually partnered with his friend Donny Palmertree to help build an online used book seller, Good Wagon Books.[14]

Creation and operation of Silk Road[edit]

Palmertree eventually moved to Dallas, leaving Ulbricht to run Good Wagon Books by himself. Around this time, Ulbricht began planning Silk Road (initially named Underground Brokers).[18] In his personal diary, he outlined his idea for a website "where people could buy anything anonymously, with no trail whatsoever that could lead back to them."[18] Ulbricht's ex-girlfriend said, "I remember when he had the idea ... He said something about ... Silk Road in Asia ... and what a big chain it was ... And that's what he wanted to create, so he thought it was the perfect name."[19] Ulbricht alluded to Silk Road on his public LinkedIn page, where he discussed his wish to "use economic theory as a means to abolish the use of coercion and aggression amongst mankind," and claimed, "I am creating an economic simulation to give people a first-hand experience of what it would be like to live in a world without the systemic use of force."[16]

Silk Road ran on Tor, a network which implements protocols that encrypt data and routes internet traffic through intermediary servers that anonymize IP addresses before reaching a final destination. By hosting his market as a Tor site, Ulbricht could conceal its IP address.[5][6] Bitcoin, a cryptocurrency, was used for transactions on the site. While all bitcoin transactions were recorded in a public log called the blockchain, users who avoid linking their identities to their online "wallets" were able to conduct transactions with considerable anonymity.[20][21] Ulbricht used the "Dread Pirate Roberts" username for Silk Road, although it is disputed whether he was the only one to use that account.[22][23] Ulbricht attributed his inspiration for creating the Silk Road marketplace to the novel, Alongside Night, and the works of Samuel Edward Konkin III.[24] 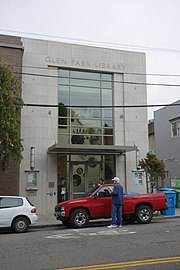 The Glen Park branch of the San Francisco Public Library, where Ulbricht was arrested by the Federal Bureau of Investigation

Ulbricht was first connected to "Dread Pirate Roberts" by Gary Alford, an Internal Revenue Service investigator working with the U.S. Drug Enforcement Administration on the Silk Road case, in mid-2013.[25][26] The connection was made by linking the username "altoid", used during Silk Road's early days to announce the website, and a forum post in which Ulbricht, posting under the nickname "altoid", asked for programming help and gave his email address, which contained his full name.[25] In October 2013 Ulbricht was arrested by the Federal Bureau of Investigation while at the Glen Park branch of the San Francisco Public Library, and accused of being the "mastermind" behind the site.[27][28][29]

To prevent Ulbricht from encrypting or deleting files on the laptop he was using to run the site as he was arrested, two agents pretended to be quarreling lovers. When they had sufficiently distracted him,[30] according to Joshuah Bearman of Wired, a third agent grabbed the laptop and handed it to agent Thomas Kiernan.[31] Kiernan then inserted a flash drive in one of the laptop's USB ports, with software that copied key files.[30]

Image placed on Silk Road after seizure by the FBI

On August 21, 2014, Ulbricht was charged with money laundering, conspiracy to commit computer hacking, and conspiracy to traffic narcotics.[32] He was ordered held without bail.[29] On February 4, 2015, Ulbricht was convicted on all counts after a jury trial that had taken place in January 2015.[33] On May 29, 2015, he was sentenced to double life imprisonment plus forty years, without the possibility of parole.[34][35]

Federal prosecutors alleged that Ulbricht had paid $730,000 in murder-for-hire deals targeting at least five people,[29] allegedly because they threatened to reveal Ulbricht's Silk Road enterprise.[36] Prosecutors believe no contracted killing actually occurred.[29] Ulbricht was not charged in his trial in New York federal court with any murder-for-hire,[29][37] but evidence was introduced at trial supporting the allegations.[29][38] The evidence that Ulbricht had commissioned murders was considered by the judge in sentencing Ulbricht to life, and was a factor in the Second Circuit's decision to affirm the life sentence.[38] A separate indictment against Ulbricht in federal court in Maryland on a single murder-for-hire charge, alleging that he contracted to kill one of his employees (a former Silk Road moderator),[39] was dismissed with prejudice by prosecutors in July 2018, after his New York conviction and sentence became final.[40][41]

According to author Nick Bilton writing in Vanity Fair, before the trial Ulbricht had been offered a plea deal which would have given him a decade-long sentence, but he turned it down, deciding instead to fight the case in court. Bilton wrote, "(Ulbricht) believed that he was smarter than everyone in the room, and that he could beat them all."[42]

Oral argument in United States v. Ulbricht at the U.S. Court of Appeals for the Second Circuit

Ulbricht appealed his conviction and sentence to the U.S. Court of Appeals for the Second Circuit in January 2016, centered on claims that the prosecution illegally withheld evidence of DEA agents' malfeasance in the investigation of Silk Road, for which two agents were convicted.[43] Ulbricht also argued his sentence was too harsh.[44][45] Oral argument was heard in October 2016,[46][38][47] and the Second Circuit issued its decision in May 2017, upholding Ulbricht's conviction and life sentence in an opinion written by Judge Gerard E. Lynch.[38] In a 139-page opinion,[38][48] the court affirmed the district court's denial of Ulbricht's motion to suppress certain evidence, affirmed the district court's decisions on discovery and the admission of expert testimony, and rejected Ulbricht's argument that a life sentence was procedurally or substantively unreasonable.[38][47]

In December 2017 Ulbricht filed a petition for a certiorari with the United States Supreme Court, asking the Court to hear his appeal on evidentiary and sentencing issues.[49][50] Ulbricht's petition asked whether the warrant-less seizure of an individual's internet traffic information, without probable cause, violated the Fourth Amendment, and whether the Sixth Amendment permits judges to find facts necessary to support an otherwise unreasonable sentence.[51] Twenty-one amici filed five amicus curiae briefs in support of Ulbricht, including the National Lawyers Guild, American Black Cross, Reason Foundation, Drug Policy Alliance, and Downsize DC Foundation.[52] The U.S. government filed a response in opposition to Ulbricht's petition.[52][53] On June 28, 2018, the Supreme Court denied the petition, declining to consider Ulbricht's appeal.[54] In 2019 Ulbricht attempted to vacate his life sentence, based on a claim of ineffective assistance of counsel by his defense lawyers; this attempt was rejected in August 2019.[55]

In 2020, according to The Daily Beast, President Trump considered commuting Ulbricht's sentence before leaving office,[56] but Trump did not pardon Ulbricht.[57]

In 2021, a pre-recorded telephone interview with Ross Ulbricht was broadcast at a conference for Bitcoin investors. Ulbricht spoke about Bitcoin's potential, his motivations for creating Silk Road, and his imprisonment. He said, “The irony is that I made Silk Road in the first place because I thought I was furthering the things I cared about: Freedom, privacy, equality. But by making Silk Road, I wound up in a place where those things don’t exist.”[58]

During his trial, Ulbricht was incarcerated at the Metropolitan Correctional Center, New York.[59] Starting in July 2017, he was held at USP Florence High.[60] His mother Lyn moved to Colorado so she could visit him regularly.[61] Ulbricht has since been transferred to USP Tucson.[62]

Deep Web is a 2015 documentary film chronicling events surrounding Silk Road, bitcoin, and the politics of the dark web, including the trial of Ulbricht. Silk Road – Drugs, Death and the Dark Web is a documentary covering the FBI operation to track down Ulbricht and close Silk Road. The documentary was shown on UK television in 2017 in the BBC Storyville documentary series.[63]

A film titled Silk Road was released on February 19, 2021. It was directed by Tiller Russell and follows Ulbricht's creation of the website, followed by the subsequent investigation by the FBI and DEA. Ulbricht was portrayed by American actor Nick Robinson.[64]