From Wikipedia, the free encyclopedia
Jump to navigation Jump to search
Cricket competition in Australia

Prior to the Shield being established, a number of intercolonial matches were played. The Shield, donated by Lord Sheffield, was first contested during the 1892–93 season, between New South Wales, South Australia and Victoria. Queensland was admitted for the 1926–27 season, Western Australia for the 1947–48 season and Tasmania for the 1977–78 season.

The competition is contested in a double-round robin format, with each team playing every other team twice, i.e. home and away. Points are awarded based on wins, draws, ties and bonus points for runs and wickets in a team's first 100 batting and bowling overs, with the top two teams playing a final at the end of the season. Regular matches last for four days; the final lasts for five days.

In 1891–92 the Earl of Sheffield was in Australia as the promoter of the English team led by W. G. Grace. The tour included three Tests played in Melbourne, Sydney and Adelaide.

At the conclusion of the tour, Lord Sheffield donated £150 to the New South Wales Cricket Association to fund a trophy for an annual tournament of intercolonial cricket in Australia. The three colonies of New South Wales, Victoria and South Australia were already playing each other in ad hoc matches. The new tournament commenced in the summer of 1892–93, mandating home and away fixtures between each colony each season. The three teams competed for the Sheffield Shield, named after its benefactor. A Polish immigrant, Phillip Blashki,[1] won the competition to design the trophy, a 43 in × 30 in (109 cm × 76 cm) silver shield.

In 1999, the Australian Cricket Board (now Cricket Australia) announced a sponsorship deal which included renaming the Sheffield Shield to the Pura Milk Cup, then to the Pura Cup the following season.[2] Pura is a brand name of National Foods, a wholly owned subsidiary of the Philippines-based San Miguel Corporation. The sponsorship increased total annual prize money to A$220,000, with the winners receiving A$75,000 and the runners up A$45,000.

On 16 July 2008 it was announced that Weet-Bix would take over sponsorship of the competition from the start of the 2008–09 season, and that the name would revert to the "Sheffield Shield" or the "Sheffield Shield presented by Weet-Bix".[3] Weet-bix is a cereal biscuit manufactured by Sanitarium Health Food Company.

In the 2019–20 season, Marsh took over the sponsorship for the competition. This followed Marsh & McLennan Companies' acquisition of JLT, which had sponsored the competition since 2017. 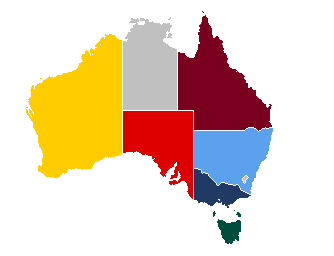 Since 1977–78, all six states of Australia have fielded their own team. There is no team for any of the territories. Details of each team are set out below.

[a] Each team has used several venues to host matches. For a full list, see list of cricket grounds in Australia.

[b] Before 1993, all states were known by their state name or cricket association title. Queensland were the first to adopt a nickname when they became known as the ‘Bulls’ from 1993. Following the success of the ‘Bulls’ name, other states followed suit and in 1995 gave their state team nicknames.

Each side has played each other both home and away every season with the following exceptions:

Where the teams played an unequal number of games, their final points were calculated on a pro-rata basis.

A number of different systems have been used over the years. Currently, points are awarded for each match during the home and away season according to the following table.

Prior to the introduction of a Final in 1982–83, the team with most points after the home and away rounds was declared the winner. With the introduction of the Final, the top team hosts the second placed team in a five-day match. The visiting team must win the Final to win the championship; the home team wins the championship in the event of a tied or drawn Final. Further details including match scorecards are available at Cricinfo[13] and the Cricket Archive.[14] 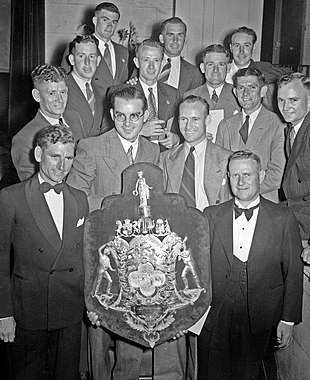 Western Australia team with the 1947–48 Sheffield Shield. The state won the shield despite playing three less games than other states with having the better average than their rivals.
Western Australia joined in 1947–48

The Player of the Year award is announced at the end of each season.[15] Since its inception in 1976 it has been awarded to the best-performed player/s over the season, as determined a panel of judges. Victorian and South Australian batsman Matthew Elliott has won the award the most times, being awarded Player of the Year on three separate occasions.

Most runs in a season[edit]

Most wickets in a season[edit]

Many bowlers have taken a hat-trick in the Sheffield Shield. Mitchell Starc is the only bowler to take two hat-tricks in a Sheffield Shield match. In round two of the 2017–18 competition, Starc became the first bowler to take a hat-trick in each innings of a first-class cricket match in Australia.[16] He became the second Australian, and the eighth bowler overall, to take a two hat-tricks in each innings of a first-class match.[17] In a match from 4–7 November 2017, New South Wales played against Western Australia at Hurstville Oval. In Western Australia's first innings, Starc dismissed Jason Behrendorff, David Moody and Simon Mackin in consecutive deliveries;[18] in the second innings he dismissed Behrendorff, Moody and Jonathan Wells in consecutive deliveries.

Most dismissals in a season[edit]