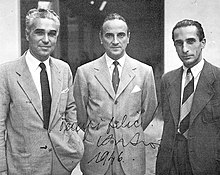 Savonuzzi received a degree in mechanical engineering from Politecnico di Torino in 1939 and worked for Fiat Aviazione and taught in aeronautics at the politecnico. During World War II he served in Albania. In August 1945[1] he succeeded Dante Giacosa as technical director of the Cisitalia carmaker, first completing Giacosa's Cisitalia D46 cigarshaped racing car. Before he left for in 1948 due to a disagreement, he had sketched out the Spider Nuvolari and the 202 CMM Aerodinamica Savonuzzi (to be built by Pinin Farina).[2]

He designed the SVA Midget racer while with Società Valdostana Automobili (SVA) 1948–49, lectured at politecnico and had some freelance work, including for Cisitalia in 1951 under Carlo Dusio. He oversaw the production of the Ford-Cisitalia 808 project in 1952.[3]

As the technical director for Carrozzeria Ghia under Luigi Segre from 1953 to 1957, Savonuzzi developed the "Supersonic" series inspired by gas turbines (as a result of his access to wind tunnels at the politecnico). First one-off car was an Alfa Romeo 1900 tuned by Virgilio Conrero for the Mille Miglia race. He then applied this to Fiat 8V (14 chassises), DeSoto Adventurer II, Jaguar XK120 (three chassises) and Aston Martin DB2/4.[4]

From 1957 to 1969 Savonuzzi worked under research director George J. Huebner (1910–96) for the turbine department of Chrysler in Detroit, being chief engineer for automotive research from 1962.[5] The resulting Chrysler Turbine Car 1962–64 were not designed by Savonuzzi, but bodied by Carrozzeria Ghia. He also studied crash-proof cars.[6] Following some time as Director of R&D under Gianni Agnelli at Fiat, he devoted himself to teaching at the politecnico until retirement in 1977.[7]