From Wikipedia, the free encyclopedia
Jump to navigation Jump to search
US Air Force officer and NASA lunar astronaut (1933–1994)

Stuart Allen Roosa (August 16, 1933 – December 12, 1994) was an American aeronautical engineer, smokejumper, United States Air Force pilot, test pilot, and NASA astronaut, who was the Command Module Pilot for the Apollo 14 mission. The mission lasted from January 31 to February 9, 1971, and was the third mission to land astronauts (Alan Shepard and Edgar Mitchell) on the Moon. While Shepard and Mitchell spent two days on the lunar surface, Roosa conducted experiments from orbit in the Command Module Kitty Hawk. He was one of 24 men to travel to the Moon, which he orbited 34 times.[1]

Roosa was born on August 16, 1933, in Durango, Colorado, to parents Dewey Roosa (1903–1988) and Lorine Roosa (née DeLozier; 1908–1993) and grew up in Claremore, Oklahoma. He attended Justus Grade School and Claremore High School in Claremore, Oklahoma, from which he graduated in 1951. Thereafter, he studied at Oklahoma State University and the University of Arizona,[2] before graduating with a Bachelor of Science degree in aeronautical engineering with honors from the University of Colorado Boulder in 1960.[3]

Roosa's graduating class at the Aerospace Research Pilot School. He is in the front row, fourth from the left. On his left side is Hank Hartsfield, with Al Worden (first from the right) and Charlie Duke (third from the left) above them.

Roosa began his career as a smokejumper with the U.S. Forest Service, dropping into at least four active fires in Oregon and California during the 1953 fire season. He was a graduate of the Aviation Cadet Program at Williams Air Force Base, Arizona, where he received his flight training commission in the U.S. Air Force. He also attended the U.S. Air Force Aerospace Research Pilot School and was an experimental test pilot at Edwards Air Force Base in California before being selected for the astronaut class of 1966.[3]

From July 1962 to August 1964, Roosa was a maintenance flight test pilot at Olmstead Air Force Base, Pennsylvania, flying F-101 Voodoo aircraft.[4] He was a fighter pilot at Langley Air Force Base, Virginia, where he flew the F-84F Thunderstreak and F-100 Super Sabre aircraft. Following graduation from the University of Colorado, under the U.S. Air Force Institute of Technology Program, he served as Chief of Service Engineering (AFLC) at Tachikawa Air Base, Japan, for two years.[5] 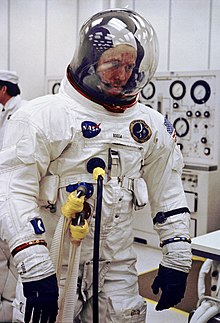 Roosa was one of 19 people selected as part of the astronaut class of 1966.[6] He was the Capsule communicator (CAPCOM) at the Launch Complex 34 blockhouse during the Apollo 1 fire on January 27, 1967.[7] In 1969, he served as a member of the astronaut support crew for the Apollo 9 mission.[3]

On Apollo 14 he spent 33 hours in solo orbit around the Moon, conducting an extensive series of experiments. On the Apollo 14 mission Roosa carried seeds from loblolly pine, sycamore, sweet gum, redwood, and Douglas fir trees as part of a joint U.S. Forest Service/NASA project. The seeds were germinated on his return and planted throughout the United States, becoming known as the "Moon Trees".[8]

Following Apollo 15, Roosa served as backup Command Module Pilot for Apollo 16 and Apollo 17, and based on crew rotations, would probably have commanded one of the last Apollo missions had they not been cancelled. He was assigned to the Space Shuttle program until his retirement as a colonel from the Air Force in 1976.[3]

Roosa attended Harvard Business School's six-week Advanced Management Program in 1973. He retired from the military as a colonel in 1976. After leaving NASA and the Air Force, Roosa held a number of positions in international and U.S. businesses, and became owner and president of Gulf Coast Coors in 1981.[3] 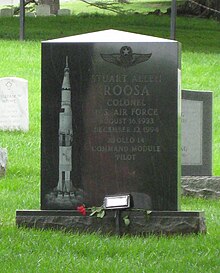 Roosa's Tombstone in section 7A of Arlington National Cemetery

On December 12, 1994, Roosa died at age 61 in Washington, D.C., from complications of pancreatitis.[3] He was survived by his wife Joan, three sons and a daughter, and seven grandchildren.[3]

Roosa is buried in Arlington National Cemetery.[9][10] His wife Joan died on October 30, 2007, in Gulfport, Mississippi. She was interred at Arlington with her husband.[11]