From Wikipedia, the free encyclopedia
Jump to navigation Jump to search
One of the three vertical posts that support the bails and form the wicket 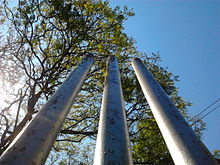 In cricket, the stumps are the three vertical posts that support the bails and form the wicket. Stumping or being stumped is a method of dismissing a batsman.

The umpire calling stumps means the play is over for the day. 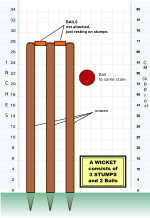 A wicket consists of three stumps that are inserted into the ground, and topped with two bails.

The stumps are three vertical posts which support two bails.[1] The stumps and bails are usually made of wood, most commonly ash,[2] and together form a wicket at each end of the pitch.

The overall width of each wicket is 9 inches (22.9 cm). Each stump is 28 inches (71.1 cm) tall with maximum and minimum diameters of 11⁄2 inches (3.81 cm) and 13⁄8 inches (3.49 cm). They have a spike at one end for inserting into the ground, and the other end has a U-shaped 'through groove' to provide a resting place for the bails.[3] In junior cricket the items have lesser dimensions.

Each stump is referred to by a specific name:

These names are relative to the batsman, so a right-handed batsman's leg stump becomes the off stump when a left-handed player is batting.

In modern professional play, the stumps are often branded with a sponsor's logo. Although they are too far away from spectators to be seen, such logos are visible on television coverage.

For professional matches, often one or more of the stumps is hollow and contains a small television camera. This is aligned vertically, but can view through a small window on the side of the stump via a mirror. The so-called stump-cam gives a unique view of play for action replays, particularly when a batsman is bowled.

A recent innovation are stumps and bails embedded with red LEDs, which flash when they are completely dislodged. Invented by an Australian engineer and trademarked as "Zing Bails", they were designed to aid both umpires with run-out or stumping decisions as well as provide distinctive images to television coverage during day-night matches. LED stumps were first used at the 2014 ICC World Twenty20, and have since become commonplace in major white-ball matches like ODIs or franchise T20 leagues.[7] They have also been used in day/night Test matches.

Manner of dismissing a batsman[edit]

Stumps and bails are two very important thing for dismissal in the game of cricket. Wicket-keeper often dislodges stumps or bails to dismiss a batsman when he tries to go down the pitch which is often known as “Stumping”. A bowler dismisses a batsman by hitting the stumps directly while bowling which is often referred to as being “Bowled”. If a fielder throws the ball at the stumps while the batsman attempts to take a run and the ball hits the stumps before the batsman comes back in the crease, then that dismissal is referred to being “Run out”. Majority of the dismissal method in the game of cricket is related to stumps.[8]

End of the day's play[edit]