From Wikipedia, the free encyclopedia
Jump to navigation Jump to search
Marathon held in Tokyo, Japan

The Tokyo Marathon (東京マラソン, Tōkyō Marason) is an annual marathon sporting event in Tokyo, the capital of Japan. It is an World Athletics Platinum Label[3] marathon and one of the six World Marathon Majors.[4] The latest edition of the race took place on 1 March 2020. It is sponsored by Tokyo Metro.

See also: List of winners of the Tokyo Marathon

The first Tokyo Marathon was held on 18 February 2007. However, years prior to 2007, Tokyo Marathon actually consisted of two marathons - the Tokyo International Marathon which took place on even years, and Tokyo - New York Friendship International Marathon which took place on odd years. In the inaugural year, 1981, both marathons took place. However, because it was not possible to support two marathons a month apart in the same city, from 1982, the alternating format went into effect.[citation needed]

The 2007 marathon was also a representative selection race of the 2007 World Championships in Athletics in Osaka. The total number of participants was set at 30,000. Of that, 25,000 people signed up for the marathon, and 5,000 signed up for the 10K run.

In January 2020, rock musician Hyde released the song "Believing in Myself" as a single inspired by the event.[7] Due to the COVID-19 epidemic, only elite runners were invited to the 2020 Tokyo Marathon. All other participants were given a deferral to 2021.[8]

Start line at Shinjuku in 2019 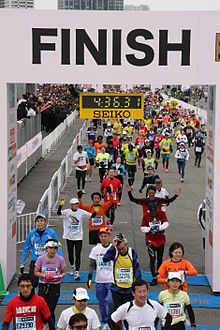 Apart from the invited athletes, runners registered with JAAF who satisfy the following requirement can register in the Elite field.[19]