From Wikipedia, the free encyclopedia
(Redirected from Tumbes-Piura dry forests)
Jump to navigation Jump to search

The Tumbes–Piura dry forests (NT0232) is an arid tropical ecoregion along the Pacific coasts of southern Ecuador and northern Peru. The ecoregion contains many endemic species of flora and birds adapted to the short wet season followed by a long dry season. Threats include extraction of wood for fuel or furniture, and capture of wild birds for sale.

The Tumbes–Piura dry forests ecoregion has an area of 4,118,081 hectares (10,176,000 acres).[1] The northern tip is in the southern coastal plain of Ecuador, while most of the ecoregion is in the northwestern coastal plain of Peru. It covers all or part of the regions of Tumbes, Piura, Lambayeque and Cajamarca in northern Peru.[2] Further north the similar Ecuadorian dry forests extend along the coast of central Ecuador.[3] The Andes rise to the east.[1]

The northern tip of the ecoregion adjoins the Guayaquil flooded grasslands. In the north it is bounded to the west by a stretch of South American Pacific mangroves and to the east by Northwestern Andean montane forests. Further south the ecoregion reaches to the Pacific Ocean to the west, and adjoins Eastern Cordillera Real montane forests to the east. Further south again it is bordered by Sechura Desert to the west and to the east by patches of Marañón dry forests, Peruvian Yungas and Cordillera Central páramo.[4]

The terrain includes coastal lowlands, low undulating hills and the foothills of the Andes.[1] The soils in the lower regions are mostly sand and clay formed during the recent Holocene epoch. Higher up the soils are made of Precambrian amphibolites, Paleozoic granites, Devonian quartzites and black slate, and Carboniferous dark limestone, sandstone and lutites. The main rivers, which mostly rise in Ecuador and flow throughout the year, are the Guayas, Zarumilla, Tumbes, Piura and Chira rivers. Other streams are seasonal, flowing only in the rainy season.[2]

There is a wide range of habitats, including desert areas with shrubs and cactuses and dense thorn forests.[1] Many species of flora are endemic, adapted to the arid conditions. Large areas are covered by seasonal dry forests that lose their leaves after the rainy season. Common species in the dry forests include Loxopterygium huasango, Handroanthus billbergii and holy wood (Bursera graveolens), all threatened by human exploitation. Other common species are Ziziphus thyrsiflora, Caesalpinea corymbosa, Capparis angulata, Bombax discolor, Pitthecellobium multiflorum and Geoffroya striata.[2]

The ceibal forest mainly holds the endemic Ceiba trischistandra. The chaparral is mainly made up of shrubs such as papelillo (Bouganvillea species), cacti and the overo (Cordia lutea). The area is rich in mesquite (Prosopis genus), which capture and fix nitrogen in their roots, enriching the soil and assisting other species. The algarrobal is mainly composed of algarrobo (Prosopis genus).[2] 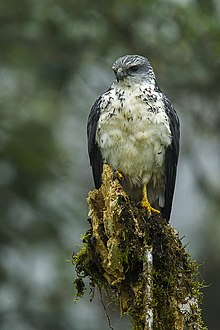 The World Wildlife Foundation gives the ecoregion a status of "Critical/Endangered".[2] In the past, the ecoregion suffered from extract of selected fauna and flora. This included capture of parrots and parakeets for sale as pets, hunting some mammals and reptiles for food, and extraction of wood for firewood, charcoal and timber. As of 2000 some recent improvements had been observed, in part due to El Niño effects and in part to establishment of the Cerros de Amotape National Park. The park management and other groups were working with communities to find ways to maintain biodiversity.[2] Protected areas also include the Reserva del Noroeste biosphere reserve.[1]