From Wikipedia, the free encyclopedia
Jump to navigation Jump to search
Term for the U.S. coined by Frank Lloyd Wright
"Usonian" redirects here. For the alternative name for a United States citizen, see Demonyms for the United States. 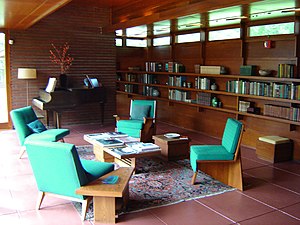 The interior of the Rosenbaum House

Usonia (/juːˈsoʊniə/) is a word that was used by American architect Frank Lloyd Wright to refer to the United States in general (in preference to America), and more specifically to his vision for the landscape of the country, including the planning of cities and the architecture of buildings. Wright proposed the use of the adjective Usonian to describe the particular New World character of the American landscape as distinct and free of previous architectural conventions.

"Usonian" usually refers to a group of approximately 60 middle-income family homes designed by Frank Lloyd Wright beginning in 1934 with the Willey House,[1] with most considering the Herbert and Katherine Jacobs First House, 1937, to be the first true "Usonian."[2] The "Usonian Homes" are typically small, single-story dwellings without a garage or much storage. They are often L-shaped to fit around a garden terrace on unusual and inexpensive sites. They are characterized by native materials; flat roofs and large cantilevered overhangs for passive solar heating and natural cooling; natural lighting with clerestory windows; and radiant-floor heating. Another distinctive feature is that they typically have little exposure to the front/'public' side, while the rear/'private' sides are completely open to the outside. A strong visual connection between the interior and exterior spaces is an important characteristic of all Usonian homes. The word carport was coined by Wright to describe an overhang for sheltering a parked vehicle.

The Usonia Historic District is a planned community in Pleasantville, New York built in the 1950s following this concept. Wright designed 3 of the 47 homes himself.

Variants of the Jacobs House design are still in existence today.[citation needed] The Usonian design is considered among the aesthetic origins of the ranch-style house popular in the American west of the 1950s.[citation needed]

According to plans that Wright created in 1939, Florida Southern College constructed in 2013 the 13th Wright building on their campus. The 1,700 sq ft (160 m2) building includes textile-block construction, colored glass in perforated concrete blocks, Wright photographs, a documentary film about the architect's work at the school, and furniture designed by Wright. Named the "Usonian House", it was originally designed as one of twenty faculty housing units. The building is home to the Sharp Family Tourism and Education Center, a visitor center for guests visiting campus to see the collection of Frank Lloyd Wright buildings.[3] 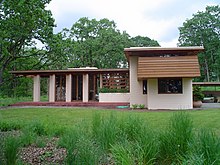 The word Usonian appears to have been coined by James Duff Law, a Scottish[4] writer born in 1865. In a miscellaneous collection, Here and There in Two Hemispheres (1903), Law quoted a letter of his own (dated June 18, 1903) that begins "We of the United States, in justice to Canadians and Mexicans, have no right to use the title 'Americans' when referring to matters pertaining exclusively to ourselves." He went on to acknowledge that some author had proposed "Usona", but that he preferred the form "Usonia".[5] Perhaps the earliest published use by Wright was in 1927:

But why this term "America" has become representative as the name of these United States at home and abroad is past recall. Samuel Butler fitted us with a good name. He called us Usonians, and our Nation of combined States, Usonia.

However, this may be a misattribution, as there is as yet no other published evidence that Butler ever used the word.

José F. Buscaglia-Salgado reclaims the term Usonian to refer to the peoples, national ideology and neo-imperial tradition of the United States of America.[7]

Miguel Torres-Castro uses the term Usonian to refer to the origin of the Atlantic puffin used in the children's book Jupu the Puffin: A Usonian Story. The bird is a puffin from Maine, US.[8]

Usono is the name for the United States of America in Esperanto. The creator of Esperanto, L. L. Zamenhof, used the term in his speech at the 1910 World Congress of Esperanto in Washington, D.C., the same year Wright was in Europe. However, it was already established by 1908, when Joseph Rhodes, a fellow of the British Esperanto Association and a member of the Lingva Komitato, published Usono in The English-Esperanto Dictionary,[9] which was "based upon the 'Fundamento,' the Esperanto literature, and the national-Esperanto dictionaries bearing Dr. Zamenhof's 'aprobo' [approval]."

The Malcolm Willey House, a precursor to the Usonians; view of garage and iconic entry steps 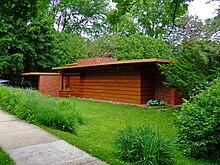 Jacobs I, exterior, front. Widely considered to be the first true Usonian house. 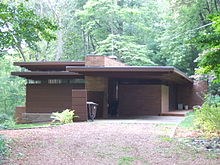 Bernard Schwartz House, one of only a few 2-story Usonians designed and built

View of the rear/private side of the Laurent House. This house is a "hemicycle" Usonian, rather than the more typical L-shaped variants. It is also the only house Wright designed for a physically disabled client.

Street-side view of the Rosenbaum House. The two, long, cantilevered, roofs pictured are a signature feature of Usonian houses, and serve to emphasize the horizontal.

The Usonian Automatic houses were made with concrete blocks. An attempt on the part of Wright to further lower the cost of housing, the clients could actually be involved in the creation of the blocks and thus the construction of the building (such as in the Tracy House).